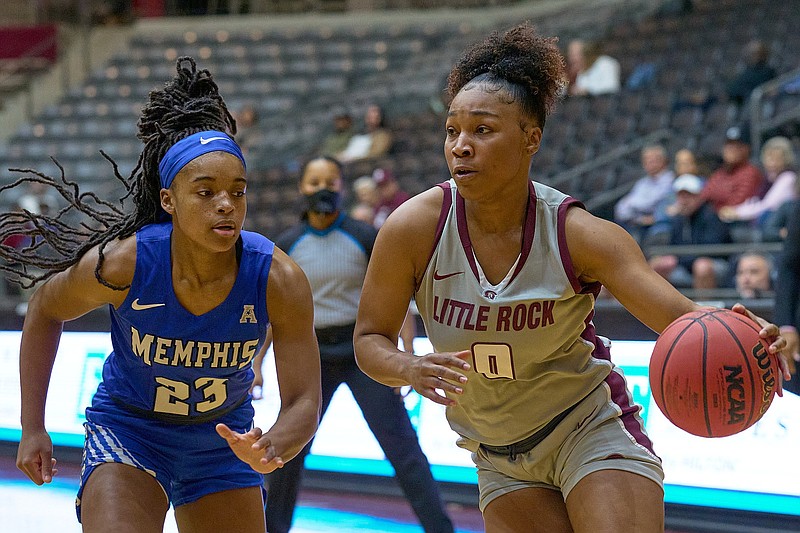 UALR guard Raziya Potter (right) drives to the basket Thursday while being defended by Memphis guard Jamirah Shutes during the Trojans’ 55-50 victory over the Tigers at the Jack Stephens Center in Little Rock. (Photo courtesy UALR Athletics)

With the ball and a 51-49 lead, the University of Arkansas-Little Rock looked for its shot to put the game away. The Trojans had worked the clock perfectly.

Mayra Caicedo drove down the left side, but Dariel Johnson saw the Memphis defender on Caicedo's hip. She was ready for the offensive rebound.

So when the ball came off to the weak side, Johnson didn't have to think twice, putting home the stick-back and icing the game.

The Trojans closed on a 14-3 run over the final 7:35 Thursday night, picking up their second home win in three days with a 55-50 victory over Memphis at the Jack Stephens Center in Little Rock. Sali Kourouma shouldered the load for UALR with a 32-point, 10-rebound effort -- her third consecutive contest with at least 24 points -- and the Trojans held the visiting Tigers without a field goal for the final six-plus minutes.

"I practice with [Sali] every day and most of the time, I'm guarding her," Johnson said of Kourouma. "She works hard and she goes even harder than this in practice, so it's easier for her in the games."

Neither team could find much footing early, with herky-jerky action and sloppy shooting on both ends of the floor. UALR (3-1) and Memphis (2-1) combined to hit eight of their 28 first-quarter field goal attempts, only improving slightly to a hair over 35% by halftime.

Other than the Trojans' 13-7 advantage at the end of the opening quarter, neither team led by more than five at any point in the first 20 minutes with Kourouma the only player in double figures -- she scored 14 but on 4-of-11 shooting.

But the Tigers had managed to get UALR in foul trouble by the break -- Caicedo, Angelique Francis and Tia Harvey each had a pair of fouls -- and they took advantage, working their lead up to five late in the third quarter and then a half-dozen early in the fourth.

It didn't help that the Trojans were out of sync on offense. They managed one three-pointer on 11 attempts and shot under 40% from the field.

"Some of the zone offenses we put in yesterday," UALR Coach Joe Foley said. "So that's just where we're at. It's taking time, but we executed some good things out of it. And sometimes we didn't, but it's early in the year."

Trailing 47-41, the Trojans started to inch closer. They pulled to within two points twice before finally tying the game at 49-49 with 2:54 remaining when Kourouma banked in a turnaround jumper in the lane as the shot clock ticked down.

UALR went ahead by one after Krystan Vornes hit 1 of 2 at the free-throw line with 95 seconds remaining, then extended its advantage when Kourouma stepped in front of a Memphis pass, breaking for the basket before drawing the foul.

Although she managed just one at the line, pushing the Trojans lead to 51-49, the hosts forced a tough jumper on the other end, setting up the crucial putback score from Johnson.

It wasn't a pretty night -- just one UALR player besides Kourouma logged more than four points. But after taking a loss in the season opener nine days ago, the Trojans have won three consecutive.

"It was a good win," Johnson said. "It taught us how to fight, how to overcome adversity. Going down the road, we could look back on this one and [know we] have that fight in our guts."