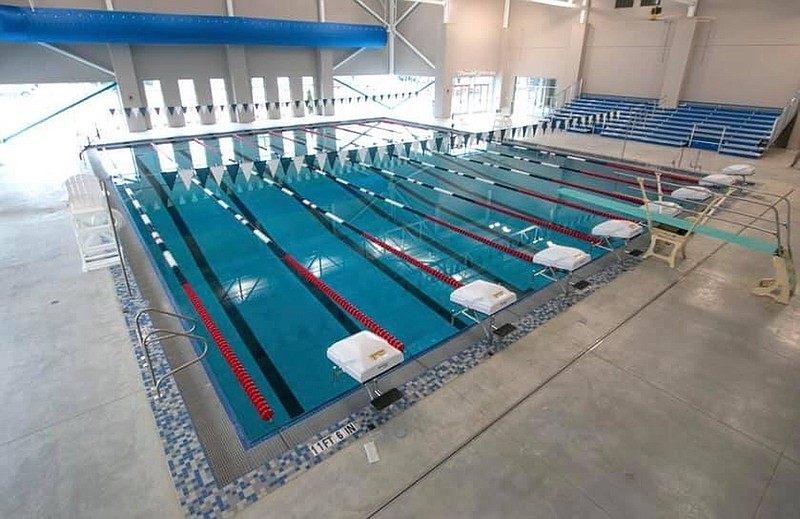 The Pine Bluff City Council voted in December to rename the Pine Bluff Aquatic Center after former Mayor Carl A. Redus. In October, the council selected CDI Contractors to complete sign work to have Redus’ name visible on the outside of the building. (Special to the Commercial)

The Pine Bluff City Council voted in December to rename the Pine Bluff Aquatic Center in honor of former Mayor Carl A. Redus, but initial efforts were less than satisfactory to the person who has pushed for the name change.

Council Member Ivan Whitfield, who is Public Works Committee chairman, said he became concerned when he was told that Redus' name would not be on the building itself. The issue, however, has now been rectified.

In October the Public Works Committee received three different proposals for either mounting Redus' name on the building or engraving the letters of his name there.

Wanting Redus to be a part of the decision-making, Whitfield said a meeting was held earlier this week to discuss the options for the sign with Mayor Shirley Washington and her project coordinator William Fells.

In October, Fells presented three options for installing Redus' name and what each option would cost.

The first proposal from Condray Signs would mount studded letters of "Carl A. Redus Jr." in all caps above "Pine Bluff Aquatics." The cost would be $3,349, which includes mounting the 18-inch letters on the building.

Arkansas Neon and Signs proposed "Carl A. Redus Aquatics" studded letters in all caps above "Pine Bluff Aquatics." The cost would be $10,355 not including the permit fee. The letter size would be 24 inches.

CDI Contractors of Little Rock, which was the general contractor for the construction of the aquatic center, proposed engraving the name unto the building above "Pine Bluff Aquatics." The new letters would match the existing font and letter height for the amount of $18,877, excluding the permit and bond.

"The preference for Mayor Redus is to have the letters and his name and aquatics the same size that is on the building right now," said Washington during Wednesday's Public Works Committee meeting. "We're going to go back to the company that did the initial work, and they are going to design it the way that Carl Redus wants it."

Whitfield said his goal was to make sure the lettering and the naming were consistent. Redus started the 2020 Vision 10 years ago, and that effort included the aquatic center and most of Go Forward Pine Bluff's initiatives, according to Whitfield.

Whitfield said he and Redus were satisfied with the final decision.

There was another concern, however, dealing with the Aquatics Center and the Pine Bluff Sharks, a youth swim team.

"When did the city of Pine Bluff adopt, accept or start a swim team," asked Whitfield, who said he didn't recall any legislation that went before the City Council.

According to Washington, the coaches from the Pine Bluff Sharks, which was initially a summer swim team before the aquatic center opened, played an active role during the planning and construction of the facility.

"Before I became mayor, one of the goals was for our city to have a swim team," said Washington, adding that she was a volunteer at the time. "As far back as I can go, that was already in place and they were going to be the startup of the citywide swim team once the aquatic center was built."

Whitfield then pointed out the similarities that the boxing team, Gloves not Guns, under the leadership of Coach Albert Brewer, had with the swim team.

Gloves Not Guns was founded in 2004 to curb youth gun violence in the Pine Bluff area by training young people in the sport of competitive boxing.

Washington said the renovation of the Merrill Center was done with Gloves Not Guns in mind and that Brewer was on board from the very beginning. Impressed and inspired by his vision of Gloves not Guns, Washington said she wanted to make sure the renovations offered the amenities Brewer needed.

"It wasn't until the facility was finished that I found out it wouldn't work for Mr. Brewer," said Washington. "Mr. Brewer wanted to have sole use of the boxing facility and not share it with any other groups."

"The swim team has to schedule the time that they are going to come in and practice. It's not a center that shuts down just for the swim team," said Washington. "If his boys are going to use it from 4 to 7 on certain days, then that would have been his sole time dedicated for his team at no cost. Mr. Brewer didn't want that."

Washington said she even considered another option, which was to offer Brewer a staff position.

"I talked to Mr. [Samuel] Glover, the fact that we could use someone there all the time and maybe bring Mr. Brewer in as an employee and pay him as a coach," said Washington. "Mr. Brewer was not amendable to that option either."

Glover is director of the city's Parks and Recreation Department.

Whitfield asked the mayor if another meeting could be set up with Brewer to offer him the use of the facility during the day and time of his choice, and Washington agreed.

"I'm hurt. I'm torn that Mr. Brewer is not using that facility right now," said Washington. "But there is no way that we can set that boxing gym aside and Mr. Brewer has sole use of it without sharing it with other groups in the community who wanted to use that facility."