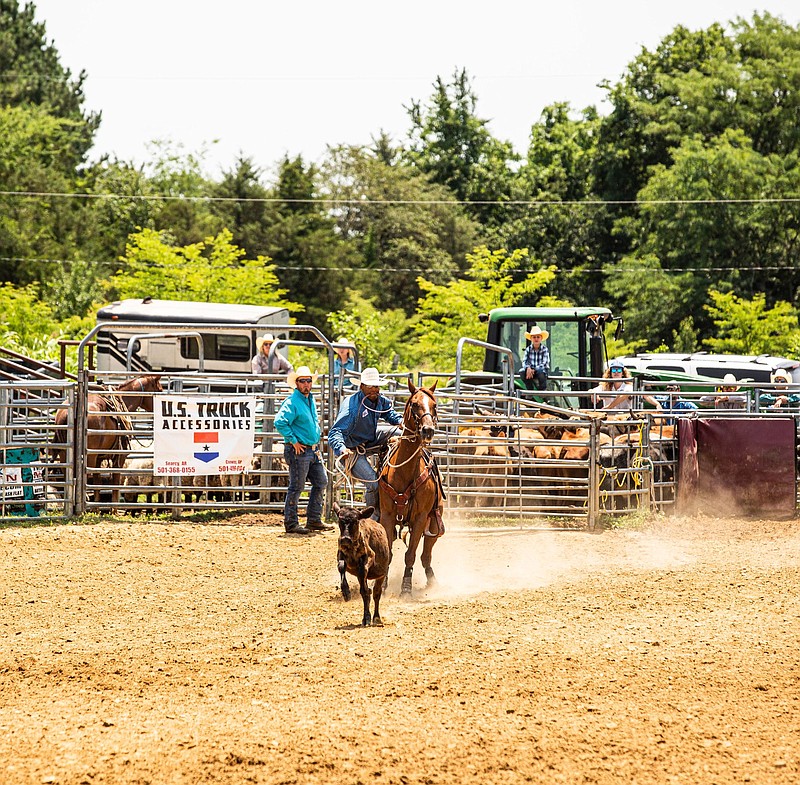 University of Central Arkansas quarterback Breylin Smith has found success as a calf roper, competing in rodeos across the South when he’s not playing or practicing football. Smith has competitively roped since he was 10. (Photo courtesy Breylin Smith)

That road ends in gravel and comes up on a white barn with a garage door square in its middle. Through the door are horse stables, though they're empty on a November afternoon, with horses grazing in a nearby pasture.

Just past the barn is a calf roping arena. Smith's uncle, Mario Thomas, sits atop a horse in the muddy, fenced-in patch of land. Smith stands just beyond the fence, right leg planted on the ground and -- fresh off breaking his ankle in a loss to Stephen F. Austin -- left leg in a boot, atop a knee scooter.

Smith's shirt is a bright shade of green and on the left sleeve is white print that reads, "Gumball Acres," with the fruit of a sweetgum tree printed between the words. Gumball Acres is the name of said sanctuary, and it's like a second home for Smith, who grew up riding horses and roping calves here.

Smith, whose University of Central Arkansas football career may have very well ended in Saturday's loss to Stephen F. Austin, carved his way into the school's record books as a quarterback.

But Smith has also carved out a budding career as a calf roper, competing in rodeos across the South when he's not playing football, and doing so with success.

"For me, it's just competing," Smith said. "I think that's something that football has really taught me, is just how to compete. You only play football from September to December, maybe January, and for those other months, I kind of needed to do something. So, I decided to pursue [rodeoing] and try to do that at sort of a high level."

Since he was 10, Smith has competitively roped, but he's been practicing the sport since he could walk. He gained an interest in it at the same time as his uncle. Thomas, who played basketball at UCA from 2000-03, grew up with horses, but it wasn't until college that he found an interest in rodeos and roping.

"I was hooked," Thomas said. "I couldn't go back. Man, I just always wanted to constantly learn, try to figure it out, and keep learning in the sport."

The former Bear, who now works as an insurance agent in Conway, spent much of his college basketball career operating in the same mode as his nephew -- putting his sport first while spending his offseason calf roping.

A "first-generation cowboy," Thomas said his entrance into the sport was difficult, largely because he had to build up both connections and resources. When he began, Thomas didn't have horses for competition, calves for practicing nor an arena in which to practice. All he really had was an interest and enough passion to break into the sport.

By the time Smith began competing, Thomas had built up his resources, providing himself and his nephew with the necessary tools to train and compete.

As young as 2, Smith remembers watching roping and rodeo videos with Thomas, and he'd follow him around while he practiced, too, picking up on the nuances of the sport.

Thomas doesn't even remember teaching Smith how to rope. He just recalls his nephew's having the ability to do it.

"He could look at something or watch something," Thomas said. "[And] he could pick it up."

Years later, Smith has proven his talents, innate or otherwise, don't just exist on a football field as he finished 2021 third in the Arkansas Rodeo Association standings.

He also has what Joe Maggio, Smith's hauling partner, called a "natural gift" when it comes to working with horses. Thomas vividly remembers Smith winning his first breakaway roping competition in Mount Vernon at age 10, doing so with a horse that had yet to compete and Smith had trained himself.

"It's very difficult because ... a lot of the stuff that the horse has to do in that particular event, the horse has to work on its own," Thomas said. "It just takes a lot of reps, and making sure you pick out the right horse that's got the right disposition ... to even handle that type of pressure, in a setting that's fast paced and loud.

Whereas most cowboys ride one or two horses in competition in a season, Smith said he's ridden as many as five. Smith also said he's trained dozens of horses for competition, and he's competed on at least 15 different horses in his career. A part of that is his enjoyment of training horses.

"Playing quarterback, there's a lot of stuff that goes on in a game and you've got to be able to stay even-keel and keep your emotions in check," Smith said. "I think, through the rodeo, through riding a lot of young horses ... when I was younger, I found that a challenge to really control my energy and not to get too excited or too down, because those horses will feel that."

What's even more considerable about Smith's success in the rodeo circuit is that he does it with a fraction of the season and time other cowboys get to spend competing and honing their craft.

"Most guys get nine to 10 months out of a calf-roping season," Maggio said. "He gets four to five. It's very impressive to see someone who doesn't, I guess in a roundabout way, doesn't get to dedicate themselves 100% to the sport year-round [have success], because it's every day. For most people, if you don't get on or swing the rope every day, you're working on something the next day to fix what you didn't do the day before."

Smith said he enjoys the challenges of abridged rodeo seasons. It's an opportunity, he said, to not put too much stress on himself, but be able to see how much he can maximize his talent. It's taught him a multitude of lessons that he said he could write a book on, but the biggest thing he notes is the perspective it's given him.

"A lot of times, if I'm having a rough day or played a rough game...I'll just go out there," Smith said. "I may take a cruise on a horse or I may just be around them ... because it's peaceful, it's away from everything. There's no distractions out there."

Smith notes, too, that it'll be interesting to see what happens when he's able to compete for a full season. A fifth-year senior, he could again return to the football field for another go-around.

He said his biggest goal at the moment is to get back into football shape, be it for another year in the college ranks or to begin a professional career.

Whether it's in a matter of months or years down the line, though, he "absolutely" wants to try his hand at a full season on the professional rodeo circuit.

"You can rope forever, ya know?" Smith said. "It's a part of me. The roping is not going anywhere. It'll be here for a while and, when the time comes, we'll try the pro rodeo deal. Whenever that is, I don't know, but it's going to happen. It's definitely a dream of mine."