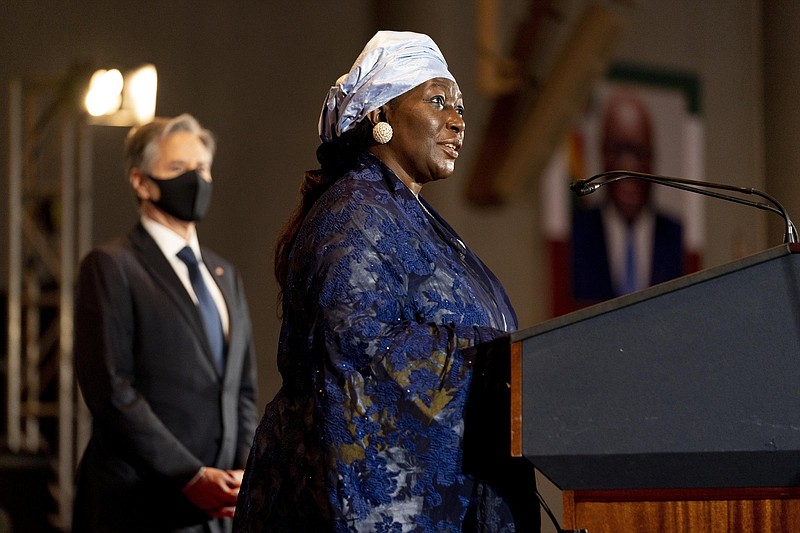 In a speech outlining the Biden administration's policy toward the continent, Blinken said growing extremism, increasing authoritarianism and exploding corruption in Africa are imperiling democracy, human rights and the future of a massive portion of the world's population.

Blinken delivered the message in Nigeria's capital of Abuja, a day after telling Nigerian leaders and officials in Kenya that the U.S. is looking to them for results, including setting examples for their Ethiopian and Sudanese counterparts.

"Authoritarianism is on the rise around the world," he said in an address at the Abuja-based headquarters of the Economic Community of West African States regional bloc.

He cited threats to free speech and freedom of assembly that have been on the rise and the toppling of civilian governments in Africa at least four times this year.

Blinken said the Biden administration is awaiting the findings of recently concluded probes into allegations of brutality by Nigerian police as it seeks Abuja's leadership more broadly in trouble spots such as Ethiopia and Sudan.

"The threats posed by violent extremists, criminals and internal armed conflict are very real. So is their potential to destabilize nations and regions, undermine development and ignite humanitarian disasters," he said. "Part of the answer is effective and professional security forces and local law enforcement that can protect citizens while respecting human rights."

Nigeria's security forces have long been accused of human rights violations in their operations, with personnel involved often escaping justice.

In October 2020, the army opened fire at a demonstration in the country's economic hub where hundreds were protesting against police brutality, killing 11 people and injuring many others, according to a government-backed panel.

Blinken said the U.S. is looking forward to seeing the full results of the investigation and will make a decision on arms sales to Nigeria based in part on the findings and whether those responsible are held accountable.

"We anticipate and look to the state and the federal government's response to the findings and expect those to include steps that ensure accountability and address the grievances of the victims and their families," he said at a Thursday news conference with Nigerian Foreign Minister Geoffrey Onyeama.

Blinken's visit to Nigeria -- Africa's most-populous country and largest economy -- is the second stop on a three-nation tour of the continent that started in Kenya and will end in Senegal.

After focusing in Nairobi on the crises in Ethiopia and Sudan, Blinken sought to present a broader picture in Nigeria, a country of more than 200 million that is grappling with many challenges, including extremist violence by Boko Haram and the Islamic State West Africa Province in the northeast, kidnapping for ransom and armed violence in the northwest and central parts of the country, and secessionist movements in the south.

In search of peace, Nigeria must "build on community-led intelligence, invest in communities where there is a disconnect between government and communities, particularly at the local level, (while) the early warning mechanisms on the ground need to be strengthened," Chris Kwaja, a senior adviser to the U.S Institute of Peace in Nigeria, told The Associated Press.

Information for this article was contributed by Chinedu Asadu of The Associated Press.