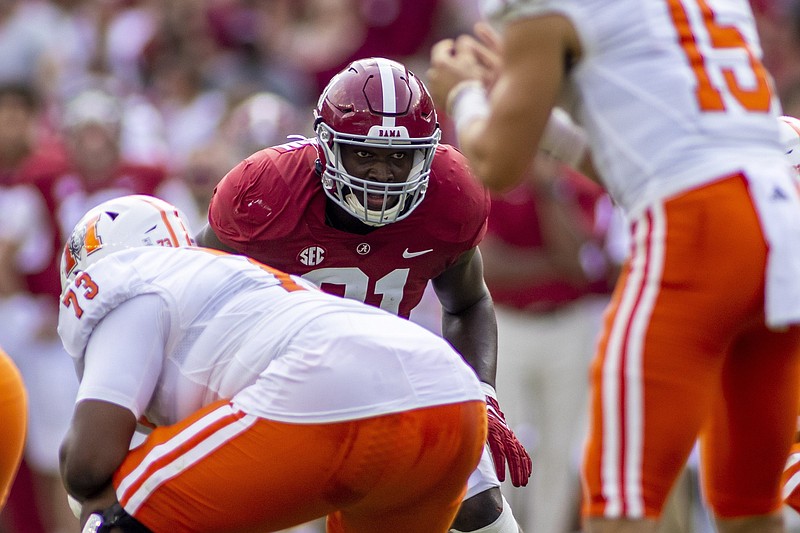 Alabama linebacker Will Anderson (31) leads the nation with 12.5 sacks and 24 tackles for loss entering today’s game against No. 21 Arkansas. (AP/Vasha Hunt)

FAYETTEVILLE -- Ole Miss Coach Lane Kiffin has a nickname for Alabama outside linebacker Will Anderson.

"He's arguably the most dynamic player in all of college football," Kiffin said. "I call him the 'Predator.' "

Kiffin's reference is to a 1987 action horror movie, "Predator," which features a deadly alien who stalks and hunts down humans.

Basically the same thing Anderson does to ball carriers.

Through 10 games for the No. 2 Crimson Tide, Anderson leads the nation with 24 tackles for loss, totalling 96 yards. He also has an FBS-best 12.5 sacks for 72 lost yards.

Anderson had nine tackles in Alabama's 42-21 victory over Ole Miss, including 2 1/2 for losses.

"He's just tearing up everything that he's around, like the movie," Kiffin said. "He's a major issue."

Anderson, 6-4 and 243 pounds, will be the Arkansas Razorbacks' issue when they play Alabama at 2:30 p.m. today in Bryant-Denny Stadium.

"I don't like to compare players, but Will has certainly done a great job for us," Alabama Coach Nick Saban said when asked where Anderson ranks among other great defensive players on his teams over the years. "He's very productive, plays hard, he's a good leader.

"He's got some pass-rush abilities. Very instinctive. I think his production sort of reflects all that. He's sure is a pleasure to have on the team, I can tell you that."

Anderson, a sophomore from Hampton, Ga., said opposing offenses have used a variety of schemes to try to block him, including using tight ends and running backs.

"It's really quite a challenge," Anderson said. "I see different protections all the time.

"It's been an adjustment ... but the coaches and the players, we all come together and kind of find ways around it."

Anderson has 67 tackles with at least three in every game.

The only game in which Anderson didn't have at least one tackle for lost yards was against Texas A&M.

That's also Alabama's only loss. The Aggies beat the Tide 41-38 on a field goal on the game's final play.

Alabama bounced back the next week to win 49-9 at Mississippi State. Anderson had four sacks for 35 yards in losses.

"You run out of enough people to keep track of everything with him," Mississippi State Coach Mike Leach said. "Part of it's the guys around him -- and he's the best one -- but guys around him, the fact that you're busy keeping track of them is part of it."

"He's explosive," Leach said. "He's a tenacious guy. All of the adjectives that go into a good player, he's all of that.

"He's one of those guys who's playing hard when others aren't."

Anderson had a season-high 12 tackles, including 4 for 13 yards in losses, in Alabama's 20-14 victory over LSU.

"Speed, quickness, toughness and awareness. He's great at the point of attack. I think he's a first-round pick.

"The best thing to do in pass protection, in my opinion, is to chip him and double-team him. The guy's a force."

Anderson is one of three finalists for the Bronko Nagurski Trophy -- which goes to the nation's top defensive player -- along with Georgia defensive tackle Jordan Davis and Oregon defensive end Kayvon Thibodeaux.

"He's like an edge rusher, but then he comes inside and beats up guards and tackles, too, which is kind of crazy," Kiffin said. "He's got relentless effort."

Anderson has been so productive that he's in the top eight of most Heisman Trophy polls, a rarity for a defensive player.

The Arkansas-Alabama game will be a CBS afternoon telecast, as will next week's Alabama-Auburn game. If the Tide beat Arkansas or Auburn, they'll clinch the SEC West title and play No. 1 Georgia in the SEC Championship Game, which also will be shown on CBS.

Getting so much airtime on CBS's marquee SEC games could help Anderson gain more support for the Heisman Trophy if he continues to have strong performances.

"Just focused on getting to a natty," Anderson said, meaning the national championship game. "Trying to finish these last two games strong and getting to the natty, that's all we're worried about as a team. All I'm worried about."