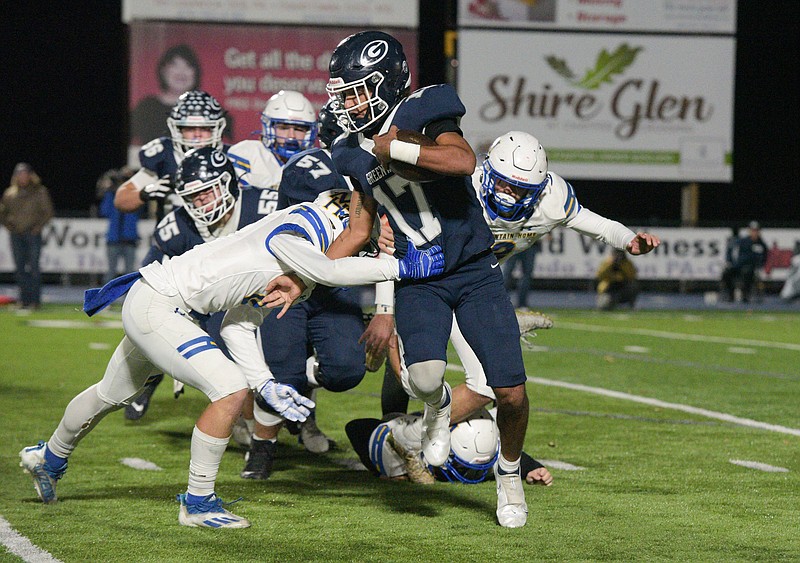 Greenwood running back Javon Williamson (17, right) carries during the first half Friday night against Mountain Home in a Class 6A quarterfinal game at Smith-Robinson Stadium in Greenwood. More photos are available at arkansasonline.com/1120mhghs/ (NWA Democrat-Gazette/Hank Layton)

GREENWOOD -- Over the last month, Greenwood has rounded into form and is now a legitimate threat to repeat as Class 6A state champions.

The Bulldogs dominated in all phases in a 42-0 blowout of Mountain Home in the 6A Quarterfinals Friday night.

Greenwood (8-3) will host Little Rock Parkview in next week's semifinals. The Patriots, which beat the Bulldogs 48-28 on Sept. 24 at War Memorial Stadium, won its quarterfinal game, a 41-21 win at Jonesboro.

Bulldog Coach Chris Young said his team is starting to round into shape at the right time after a 2-2 start. The defense has posted three straight shutouts while the offense has at least scored 35 points over the last six games.

"We have a good football team, and our offense and defense are complementing each other," Young said. "It's great to practice football during Thanksgiving. It is a tradition that we want to keep doing."

Greenwood's defense limited Mountain Home to just 151 total yards and 10 first downs, six of those first downs were gained after Greenwood built a 35-0 lead invoking the running clock in the second half.

"This was a big test for our defense tonight," Young said. "We had a couple of turnovers and a kickoff return. We knew that Mountain Home was capable. But our defense bowed up and stopped them. That is a great sign moving forward."

"There were a lot of guys open, and they made big plays tonight," Houston said. "We ran a lot of underneath plays and the receivers made big runs after the catch. The defense brings the energy and when they get going, it helps the offense."

The Bulldogs built a 28-0 halftime lead as Houston had 296 passing yards and the defense allowed just 76 yards and four first downs.

"The defense is used to us going fast on them, so they are used to lining up quickly and those guys are playing well," Young said. "They are flying around, tackling well and causing turnovers."

Houston capped off an 81-yard drive with an 18-yard touchdown pass to Grant Karnes with 5:10 left in the first quarter.

On its next possessions, Luke Brewer turned a short bubble screen from Houston into an 81-yard touchdown pass with 2:23 left in the first quarter and a 14-0 Bulldog lead.

Colin Daggett started the next Greenwood possession when he picked off a Bomber pass at the Bulldog 30.

Greenwood then marched 70 yards in 13 plays, capped by a 1-yard Houston keeper for the touchdown and the lead was now 21-0 with 6:48 left in the first half.

The Bulldog defense stiffened after Mountain Home's Brody Patterson returned the kickoff 74 yards to the Greenwood 14. The Bombers went for it on fourth and 2 but running back Gage Lindsey was stuffed for no gain at the Bulldog 6 to end the scoring threat.

Houston capped the first half scoring by hitting Aiden Kennon for a 24-yard touchdown with 1:06 left before halftime to cap a three-play, 65-yard drive.

Reserve quarterback Slade Dean capped the scoring by hitting Karnes for a 9-yard touchdown pass with 6:44 left to set the final score.