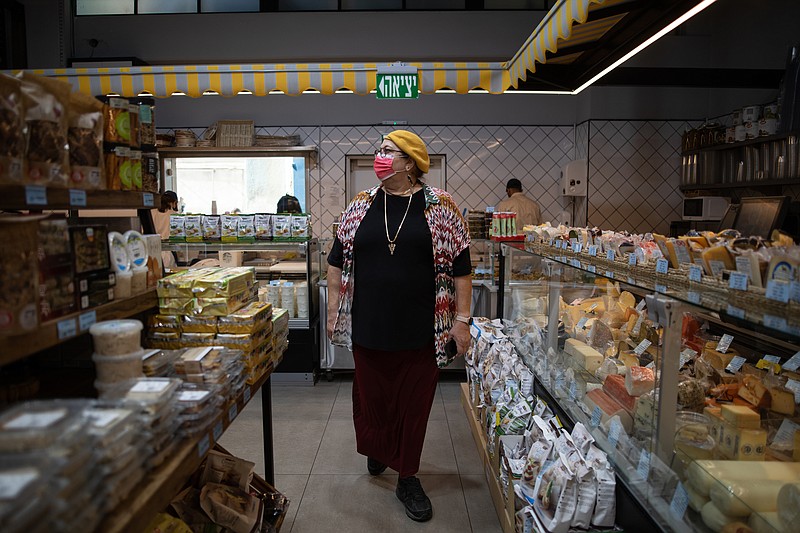 Sara Meckler, 61, Kashrut supervisor for the Israeli organization Tzohar, inspects kosher labels on products at the kosher supermarket Neomi's Farm in Raanana, Israel. MUST CREDIT: Photo for The Washington Post by Corinna Kern

She looked for kosher marks from around the world, checked ingredients, consulted a database on her phone -- "I better call the rabbi about this one," she said of a packet of breadsticks -- just as hundreds of inspectors do in a country where a kashrut certificate is as vital as a business license for most grocery stores, hotels and restaurants.

But for some religious Israelis, Meckler's careful pondering of a can of Italian artichokes is to be denounced as an existential threat. Neither she nor her bosses at Tzohar, a pluralistic Jewish organization, belong to the ultra-Orthodox Jewish community that for decades has held a monopoly on the official system of kosher certification.

Israel's new governing coalition, one of the few not to include ultra-Orthodox parties in the past 45 years, has moved to loosen the ultra-Orthodox grip on food certification and a raft of other religious and social policies, ranging from bans on Sabbath transit to exemptions for ultra-Orthodox men from military service.

Few of the changes that have been discussed will touch more Israelis on a daily basis than revamping food inspections. Under Prime Minister Naftali Bennett's government, the kosher certificates granted by alternative inspectors such as Meckler will soon carry the same authority as the country's Chief Rabbinate, an office long dominated by the ultra-Orthodox.

"A complete collapse of values," the United Torah Judaism political alliance lamented. "A cornerstone of the establishment of a Jewish state has fallen," the ultra-Orthodox Shas party declared. One rabbi said allowing women like Meckler to be inspectors amounted to "sexual immorality."

The complaints have exploded as Bennett's five-month-old coalition has also taken up legislation that, in part, would give Jews other than the ultra-Orthodox a say over whether converts to Judaism have a right to marry and whether women will be allowed more freedom of worship at Jerusalem's Western Wall.

New regulations have already cut child-care subsidies for the children of religious scholars. Almost half of all ultra-Orthodox men opt for full-time study in religious schools, known as yeshivas, instead of employment, and their families have grown dependent on these government subsidies.

"It's a unique moment," said Gilad Malach, an expert in ultra-Orthodox issues at the Israel Democracy Institute, or IDI. "They have been in the government for more than 37 years, more even than [former prime minister Benjamin Netanyahu's] Likud party. It just shows how much easier it is to do these reforms when the Haredim are not there to block them."

The ultra-Orthodox, or Haredim as they are known in Hebrew, make up about 13% of Israel's population. But they have gained outsize influence over social and religious policy because their political parties have repeatedly provided the seats needed for would-be prime ministers to secure a majority in parliament.

For all but eight years out of the past 45, ultra-Orthodox lawmakers have provided decisive support for various governing coalitions, through which they have gained a veto over proposed religious changes, such as to permit civil marriage or allow some public transit on the Sabbath. An agreement among lawmakers to ease restrictions on women worshiping at the Western Wall was originally negotiated in 2016, only to be sidelined by Netanyahu at the request of his ultra-Orthodox partners.

The governing coalition that took office in June, which combines right-wing, left-wing and Arab parties, has moved quickly to push overhauls that are popular with the broader population.

"The Haredim have not done anything to win friends and influence people," said Samuel Heilman, a professor of sociology at the City University of New York who studies Orthodox groups. "There is a lot of support for this."

While an estimated two-thirds of Jewish Israelis keep kosher to some degree, many don't adhere to the strict standards of the ultra-Orthodox. Retailers pay more than $100 million a year to religious councils whose inspectors spend almost 6.5 million hours making sure the food, pans, pantries and ovens are all in compliance, according to an IDI study. Most of those payments go to the ultra-Orthodox, making the enforcement of kashrut -- the body of Jewish laws pertaining, among other things, to dietary practices -- an important revenue stream.

"This is an important source of subsidy for all of their programs, like a guaranteed contract from the government," Heilman said.

Although alternative certifications had already been in use, until now only the ultra-Orthodox-controlled Chief Rabbinate has been allowed to grant the government-backed certificate that uses the word "kosher" at the top. By the end of 2022, endorsements from Tzohar and other groups will carry the same weight.

Ultra-Orthodox lawmakers fought fiercely to derail the change, offering more than 1,000 amendments during parliamentary debate. Ultra-Orthodox protesters, including kosher inspectors fearing for their jobs, blocked traffic in Tel Aviv. Some highlighted their objections by cooking token pieces of crab and shrimp -- decidedly not kosher -- on a camp stove in front of the home of the minister of religious services.

Ultra-Orthodox leaders argue that the change will confuse shoppers. The Shas party warned of "fictitious kashrut agencies that will cause masses of Jews to eat forbidden foods."

But advocates say more competition could address complaints that the monopoly system has grown too expensive and, in some cases, corrupt. Tales of inspectors demanding cases of produce or free hotel rooms are common. The head of the Chief Rabbinate's kashrut division was indicted on bribery charges in 2020 after being videotaped allegedly accepting envelopes of cash from food importers.

The changes could also ease the burden on entrepreneurs. Last year, for instance, the owner of Jerusalem's Kalo cafe was told that his Palestinian cook could no longer use an induction cooktop, which heats up automatically when the pot touches the surface, because the inspector ruled that this violated the religious prohibition on non-Jews lighting a stove.

"I switched," said Yaacov ben Elul, pointing to the Tzohar certificate now on his wall and to the Palestinian cook working under it. "Mustafa has been with me for 32 years."

At the boutique food shop in Raanana, Meckler, a transplanted New Yorker with a pleasant demeanor and boisterous laugh who, as an observant Jew, covers her hair with a scarf, beret or wig in public, was wrapping up her inspection. She checks the store three times a week.

"What's kosher for our purposes is not kosher to the next person," she acknowledged.

The store's employees said customers in this affluent, largely secular suburb of Tel Aviv are fine with having a Tzohar certificate on the wall rather than the official rabbinate document.

Some customers said they hoped the new inspection regime would reduce their grocery bills. "Why should I pay extra money for their stricter standards?" asked Afred Fass as he pushed a cart.

Meckler's next stop was a restaurant in a nearby high-tech office park. She opened bags of rice in the kitchen, scanning them for any tiny insects that would violate Jewish law.

"I'm really happy when I find nothing," she said. "I've found some shocking things. You should see the pictures on my phone."

The restaurant's owner, Udi Shturk, explained that he had opted for an alternative kosher certificate after the rabbinate wanted to double the fee he paid at another nearby restaurant.

When he first displayed the Tzohar certificate a few months ago, some religious customers took a look and left, he recalled. But most stayed, and many more have come by.

"It's fine. I mean, look," he said, gesturing to the line of diners extending out onto the sidewalk. "For most people, kosher is kosher."

Information for this report was contributed by Shira Rubin of The Washington Post. 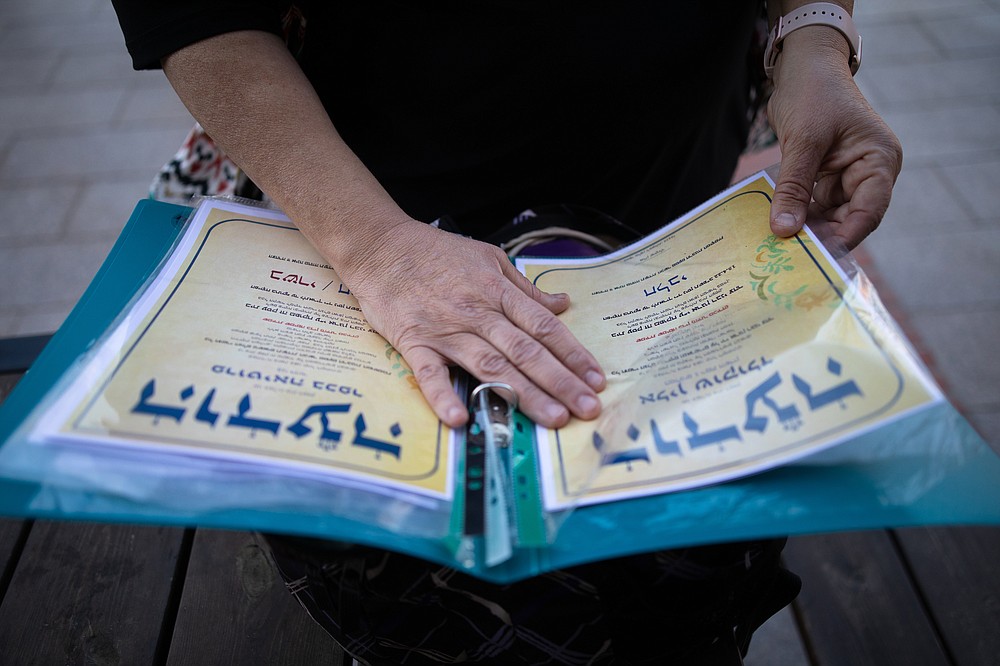 Sara Meckler, 61, Kashrut supervisor for the Israeli organization Tzohar, holds a folder with Kosher certificates ready for delivery to the respective businesses. MUST CREDIT: Photo for The Washington Post by Corinna Kern
ADVERTISEMENT