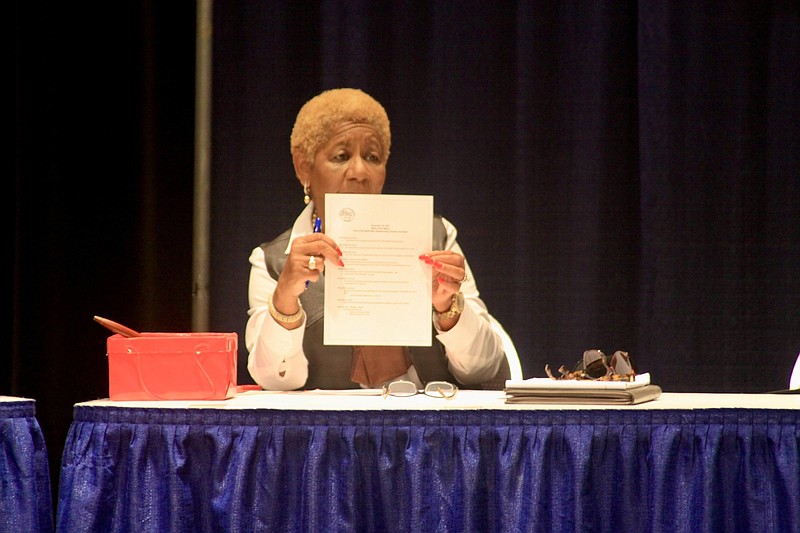 Pine Bluff Mayor Shirley Washington holds up the new agreement with Optimization Direct, Inc. to provide services for the city in the preparation of new voting districts to reflect the population changes found in the 2020 Federal Decennial census data.

A special-called meeting was held last week to vote to replace a city redistricting vendor that was no longer able to fulfill its contract agreement.

During Monday’s City Council meeting, a resolution was approved to contract DataScout LLC for professional services in preparation for the required revisions to the city’s voting districts to reflect the 2020 census.

However, officials with DataScout, which contracts with municipalities nationwide, advised Pine Bluff Mayor Shirley Washington that they would be unable to perform the work within the time period imposed by law and therefore could not carry out the duties required in the contract.

“We were time-sensitive, and they told us they could get it done by January, but by the time we contacted them Tuesday after we passed it on Monday night, they told us they wouldn’t be able to get it done in January at all,” said Washington. “It may be February.” Washington said the city went with the next lowest bidder, Optimization Direct Inc., which agreed to do the work for less than it had originally bid.

“Their initial bid price had been $26,000, but we went back to them asking them to please consider doing it for the price Data Scout said they could do it for which was $4,000, and they did agree,” said Washington.

The prior resolution with DataScout LLC was repealed, and the new resolution to execute an agreement with Optimization Direct, Inc. to provide services for the city in preparation of new voting districts to reflect the population changes found in the 2020 census data was approved.

According to Washington, Optimization Direct Inc. will have the first draft completed by Wednesday, and any changes from the council would be due by Nov. 29.

A tentative date of Dec. 9 has been set for a public hearing during which the mapping proposal would be presented to the public.

On the following day, the draft would be submitted to the Jefferson County Election Commission for its approval.

Council member Glen Brown Sr. pointed out a concern he had which included a 1% target deviation.

He also was concerned that voters living close to the borders of their wards would end up in a different ward if ward lines are changed. Such changes could also alter where residents vote, he said.

“Some people that are living near a borderline may not be in Ward 2 anymore; they may be in Ward 3,” he said. “That may change the voting precinct that they go to for voting.” DataScout, which did the redistricting for Jefferson County, used the cornerstone principal of redistricting: “one person, one vote.” Due to the nature of the data and other legal and policy requirements, they said it is technically challenging, and often undesirable, to create districts that are perfectly equal in population size.

In addition, the company said it uses the following redistricting principals when analyzing when and where to move district lines: Create geographically contiguous districts.