Studies to see if protection from covid lasts past year by Compiled Democrat-Gazette Staff From Wire Reports | November 22, 2021 at 7:16 a.m. 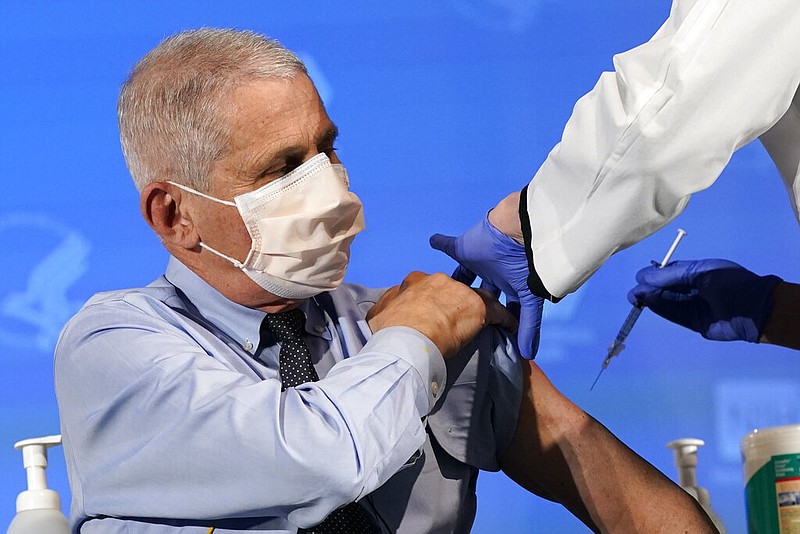 [Video not showing up above? Click here to watch » arkansasonline.com/1122fauciabc/]

Booster shots were authorized Friday by the Food and Drug Administration for every American 18 and older who has received a Pfizer-BioNTech or Moderna vaccine. Recipients of the Johnson & Johnson vaccine already had been cleared for boosters.

"We would hope, and this is something that we're looking at very carefully, that that third shot ... not only boosts you way up, but increases the durability so that you will not necessarily need it every six months or a year," Fauci said on ABC's "This Week." "We're hoping it pushes it out more."

Before Friday's announcement from federal authorities, a number of states had begun offering boosters for adults. The governors of Connecticut and New Mexico recently said they wouldn't consider people fully vaccinated unless they had gotten boosters.

Fauci, the chief medical adviser to President Joe Biden, wasn't willing to take it that far.

"Fully vaccinated right now by definition is the original two doses with ... Pfizer and Moderna, and a single dose with J&J," he said.

More people in the U.S. have died of covid-19 so far this year than in all of 2020, according to a Wall Street Journal report.

The country's total number of covid-19 fatalities from this year and last year surpassed 770,800 on Saturday, according to the Journal, which cited data from the federal government and Johns Hopkins University. There were 385,343 fatalities last year.

[Video not showing up above? Click here to watch » arkansasonline.com/1122biersack/]

Fauci blamed the highly infectious delta variant of the virus for the sobering numbers.

"We're dealing with a delta variant right now, which is very, very different from the original variants that we were dealing with before," he said. "This is a virus that is highly, highly transmissible.

With the holiday season approaching, concerns about a possible surge in the virus are high, and Fauci cautioned Americans to get vaccinated, with boosters if possible, and play it safe.

"If you're vaccinated, and hopefully you'll be boosted too and your family is, you can enjoy a typical Thanksgiving meal, Thanksgiving holiday with your family," Fauci said. "There's no reason not to do that."

Who should get covid-19 vaccine boosters depends on the public health goal, said Dr. Scott Gottlieb, the former FDA commissioner.

The Centers for Disease Control and Prevention agreed with the FDA later Friday and advises that those 50 years and older, or adult residents in long-term care, "should" get a Moderna or Pfizer booster, while other adults "may" get one. The agency also advises that all adults who received the Johnson & Johnson shot should get boosted.

Speaking Sunday on the CBS show "Face the Nation" about the current recommendations, Gottlieb, a Pfizer board member, said that there are two views about the goal of boosters: If vaccines are meant to protect people from severe covid infections, they should be recommended for people over 50.

Immunity from vaccines wanes in older people after six months, placing them at increased risk for a serious infection and, Gottlieb said, "a bad outcome." But, he added, if the goal of boosters is to slow or stop transmission of the coronavirus, they should be recommended for younger people.

Boosters may not help those individuals avoid severe disease because their immunity is already good, Gottlieb said, but they can prevent younger people from infecting others.

"You're recommending the booster as a tool to try to make them less likely to pass on the virus," he said.

That sort of strategy is not new to the infectious-disease world. Boys are immunized against rubella, or German measles. But the goal is not to protect them -- the disease is mild in children. Instead, it is to prevent boys from spreading the virus to pregnant women -- rubella can cause severe birth defects.

Girls, too, are immunized against rubella to prevent them from spreading the virus, but also to protect their fetuses when they are older, if they become pregnant.

Gottlieb said he did not think the CDC would recommend that everyone get three doses any time soon because of the debate among public health experts over the goal of vaccination.

He added, "the CDC's sort of stuttering approach to how they've embraced boosters is sort of reflective of that debate."

Many hospitals in Michigan are nearing their capacities amid an alarming surge in coronavirus cases.

The toll on hospitals is compounded by a staffing shortage that is rippling through the state's health care system and a rise in people seeking medical help for issues not related to covid-19, health leaders said.

On Saturday, Spectrum Health had 371 patients hospitalized with covid, and as of earlier in the week, 86% of those hospitalized for covid were unvaccinated.

On Friday, the Michigan Department of Health and Human Services announced a mask advisory in an effort to slow the virus's spread ahead of the holidays. The health department recommended that all residents older than age 2 wear a mask at indoor gatherings and urged businesses to implement a mandatory mask policy.

The department said the burdens on Michigan's hospitals "have reached a critical point in areas of the state."

Experts said the latest surge was even more concerning than past increases and urged residents to get vaccinated. Fifty-four percent of people in Michigan were fully vaccinated as of Saturday, fewer than the national rate of 59%.

"Our previous surges generally went from trough to peak in about two months," said Laura Appel, a senior vice president with the Michigan Health and Hospital Association. "In this current surge, we have been moving from the previous trough since about July 1, and we are still headed upward."

In a statement to The Washington Post, Disney said Saturday that it still believes its "approach to mandatory vaccines has been the right one."

But amid the uncertainty caused by the new state laws, Disney "will address legal developments as appropriate," the statement said.

Under the legislation passed in a special session last week, Florida companies are barred from mandating that all employees get vaccinated, and instead must allow workers to "choose from numerous exemptions," according to a statement from DeSantis, a Republican.

Among the justifications for exemption are "anticipated future pregnancy" and recovery from prior covid-19 infection. Workers may also opt for regular coronavirus testing or the use of personal protective equipment -- paid for by the employer -- in lieu of a vaccine.

The law also calls for fines of as much as $50,000 per violation for large companies and $10,000 for smaller businesses if an employee is fired for not complying with a vaccine mandate.

The rule was blocked by a federal appeals court in Louisiana -- seen as one of the most conservative courts in the country -- after Republican-aligned businesses and groups sued. A group of lawsuits against the order will be consolidated in federal court in Ohio, where it faces another panel of judges mostly appointed by Republicans.

Disney said that more than 90% of "active" Florida-based employees had verified to the company that they had been fully vaccinated. Airlines with vaccine mandates have reported similarly high vaccination levels.

Amid concerns over the continued spread of the coronavirus throughout the United States, a group of health-care associations that included the American Medical Association last week urged U.S. companies to voluntarily implement Biden's vaccine mandate, writing in a joint statement that "now is the time" for businesses to "step up and show they are serious" about stopping the spread of the virus.

Information for this article was contributed by Shant Shahrigian of the New York Daily News, by Gina Kolata and Vimal Patel of The New York Times and by Bryan Pietsch of The Washington Post.