No one helping with border, Lukashenko says; Germany calls crisis cynical ploy by The Associated Press | November 23, 2021 at 4:24 a.m. 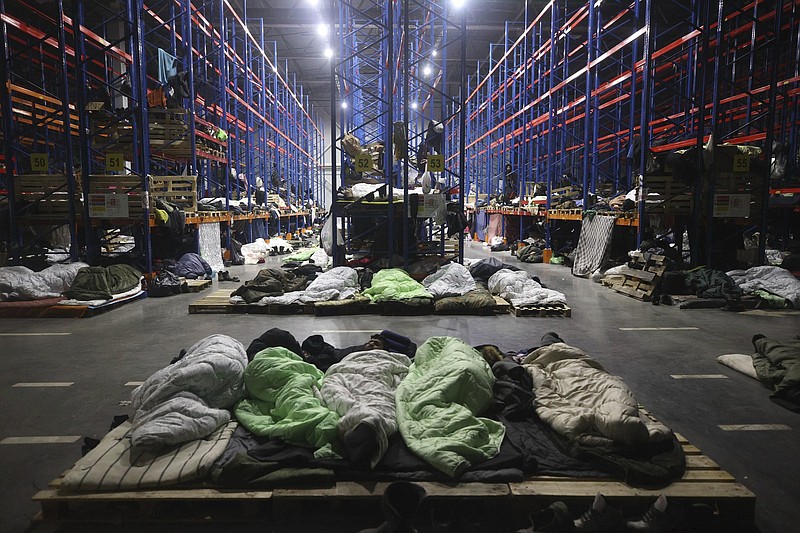 Migrants sleep a logistics center at the checkpoint "Kuznitsa" at the Belarus-Poland border near Grodno, Belarus, Monday, Nov. 22, 2021. Belarus President Alexander Lukashenko on Monday chafed at the European Union for its refusal to hold talks on the influx of migrants on the country's border with Poland and urged Germany to accommodate about 2,000 migrants who had remained on the border with Poland. (Maxim Guchek/BelTA via AP)

MOSCOW -- The authoritarian leader of Belarus on Monday sharply criticized the European Union for its refusal to hold talks on the influx of migrants on the country's border with Poland.

Belarus President Alexander Lukashenko urged Germany to accommodate about 2,000 migrants who remained on the border with Poland and slammed EU officials for refusing to negotiate an end to the standoff.

[Video not showing up above? Click here to watch » arkansasonline.com/1123migrant/]

"We must demand that the Germans take them," Lukashenko said at a meeting with officials.

He charged that German Chancellor Angela Merkel promised him that the EU would deal with the issue when they spoke by phone this month.

"I'm still waiting for the EU to give us a response about 2,000 refugees," Lukashenko said. "They haven't even contacted us."

EU spokesman Peter Stano said the bloc has been "in touch with a number of Belarussian interlocutors," adding that it is looking into the possibility of holding talks with U.N. agencies and Belarussian officials at a technical expert level on how to help repatriate those stuck in Belarus.

The EU has accused Lukashenko's government of orchestrating the migration surge on its eastern flank as a "hybrid attack" in retaliation for the bloc's sanctions over the crackdown by Belarusian authorities on domestic protests. Belarus denies the allegation.

Poland is pushing the migrants back, saying it's protecting the border for all of Europe. It has received strong declarations of support from the EU, NATO and the U.S.

A video posted Monday on Twitter by the spokesman for Poland's security forces, Stanislaw Zaryn, shows Russian lawmaker Vitaly Milonov, on the Belarus side of the border, shouting sarcastic comments in Russian at Polish border guards.

"Catholics, where is your love for your neighbors? Your faith means less to you than your pay and the instructions from Brussels," Milonov, a member of Russia's ruling United Russia party, shouted across the closed checkpoint of Bruzgi-Kuznica.

The International Rescue Committee said 13 migrants have died in the forests on both sides of the border. Others have abandoned hopes of reaching Europe and were flown back to the Middle East.

Humanitarian groups and the Catholic Church have been pressing to be allowed to bring aid to the stranded migrants.

Lukashenko on Monday shot back at Polish authorities, accusing them of "trying to solve their internal and external problems by putting pressure on Belarus and casting it as a culprit for Poland's problems."

He insisted the migrants have been heading west to reach relatives in Germany.

"We haven't been shuttling anyone across the border," he said. "Those people are heading there on their own. We don't want any confrontation ... but we will protect those hapless folks as much as we can."

Polish Border Guard spokeswoman Anna Michalska said that on Sunday alone there were more than 300 attempts by migrants to get through the razor-wire border fence into the EU. She said most were prevented, while about 60 who got through were turned back. In one case, around 150 "aggressive foreigners" tried to cross, aided by Belarus forces who used laser pointers and spotlights to blind Polish border guards, she said.

Information for this article was contributed by Raf Casert of The Associated Press. 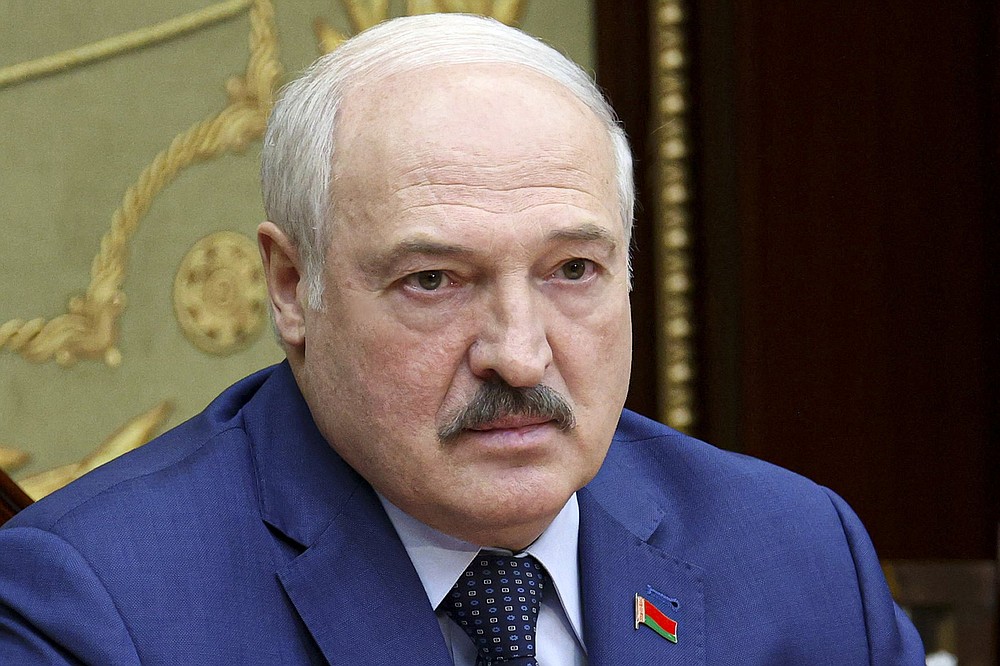 Belarusian President Alexander Lukashenko attends a meeting in Minsk, Belarus, Monday, Nov. 22, 2021. Lukashenko on Monday chafed at the European Union for its refusal to hold talks on the influx of migrants on the country&#x27;s border with Poland. (Nikolay Petrov/BelTA Pool Photo via AP)