ARKANSAS SIGHTSEEING: Wings Over the Prairie takes off in Stuttgart 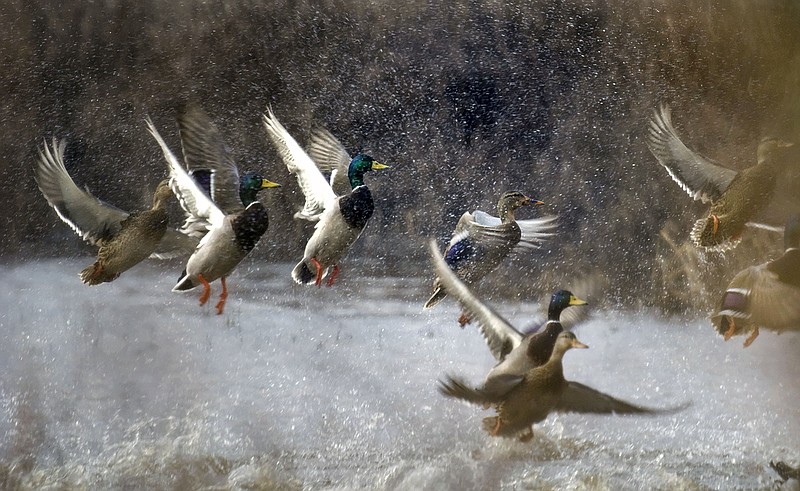 The ducks are on their way to Stuttgart for this weekend’s Wings Over the Prairie Festival. (Arkansas Parks & Tourism)

STUTTGART — The quack will be back this weekend in the self-proclaimed Rice and Duck Capital of the World, after pandemic precautions a year ago silenced one of Arkansas' oldest and most emblematic festivals.

Stuttgart's Main Street, quiet during 2020's Thanksgiving weekend, figures to be thronged along the fest's midway for the Wings Over the Prairie Festival. They'll be enjoying carnival rides and games, downing delectable food, reveling at a beer garden, ascending in a tethered hot-air balloon, shopping (or just browsing) in tents stocked with outdoor gear and souvenirs.

The main event is scheduled for Saturday afternoon, when top-flight competitors will deploy their duck calls almost like woodwind instruments in the World Championship Duck Calling Contest. They'll be pursuing a prize first awarded here in 1936 — a history explored in exhibits at Stuttgart's inviting Museum of the Arkansas Grand Prairie.

The festival's traditional prelude took place on Saturday when the Queen Mallard and Junior Queen Mallard pageants were staged at Stuttgart Junior High School. On Wednesday, the Main Street carnival and midway will open for the first of four days, including Thanksgiving itself.

Saturday will get off to an active start at 8 a.m. with the Great 5K/10K Duck Race/Family Fun Run. Then the quacking competitions begin on the Main Street Stage, starting at 9 a.m. with the Junior World's Championship Duck Calling Contest. The women's world championship is set for 10 a.m., followed by the seniors event at 11 a.m.

Cooked ducks play the starring role at 11 a.m. in the World Championship Duck Gumbo Cook-Off at the Producers Rice Mill parking lot on Park Avenue. Then the spotlight returns to the Main Street Stage for the 2 p.m. duck-calling world's championship. Wrapping up the day of virtuoso honking immediately after will be the Champion of Champions Duck Calling Contest, open to previous world champions.

An entire wing at the Museum of the Arkansas Grand Prairie, 921 E. Fourth St. (grandprairiemuseum.org), is devoted to duck calling and other facets of wildfowl hunting. That includes the history of the festival, which began during the Great Depression strictly as a duck-calling competition.

One of the Waterfowl Wing's most eye-catching objects is a labor of love created in the mid-1960s by Ruby Abel, a Stuttgart restaurant owner and twice winner of the Women's World Championship Duck Calling Contest. She also worked as a professional "duck dresser," cleaning and plucking the birds.

To create her "Coat of Many Feathers," Abel took the heads of 450 mallard ducks, pulled off their luminescent green feathers and sewed them into the coat. She wore the artful raiment and occasionally loaned it to friends. Twice she donned it in New York when appearing as a contestant on the old television game shows "What's My Line?" and "To Tell the Truth."

Perched on a shelf is another novel creation. It's a hat made from the tail feathers of mallards by Arthur J. Longun as a gift to the late Willie Oates, known around Arkansas as the "Hat Lady" for her collection of head wear.

The wing's main showcase is the Waterfowl Room, which displays mounted examples of 21 duck species, three goose species and a coot. The setting is enlivened by recorded sounds from 12 kinds of ducks. The room's oldest objects are American Indian duck effigy pots from the Temple Mound Building Period, around A.D. 1100.

Opened in 1974, the museum extends over 20,000 square feet, along with an outdoor area featuring old-time structures that include a copy of a German Lutheran church scaled to two-thirds actual size. Also exhibited outside is a massive antique tractor, an example of the many vintage farm machines to be seen inside.

"All during the year, a lot of visitors come to see our farm equipment," says Gena Seidenschwarz, the museum's director. "The Waterfowl Wing is especially popular in the fall months, when the duck-hunting season is looming along with the festival."

For more information on the Wings Over the Prairie festival, visit stuttgart.org/schedule-of-events.html or call (870) 673-1602.

Print Headline: Ducks in a row