Economy sees drop in growth for its 3Q 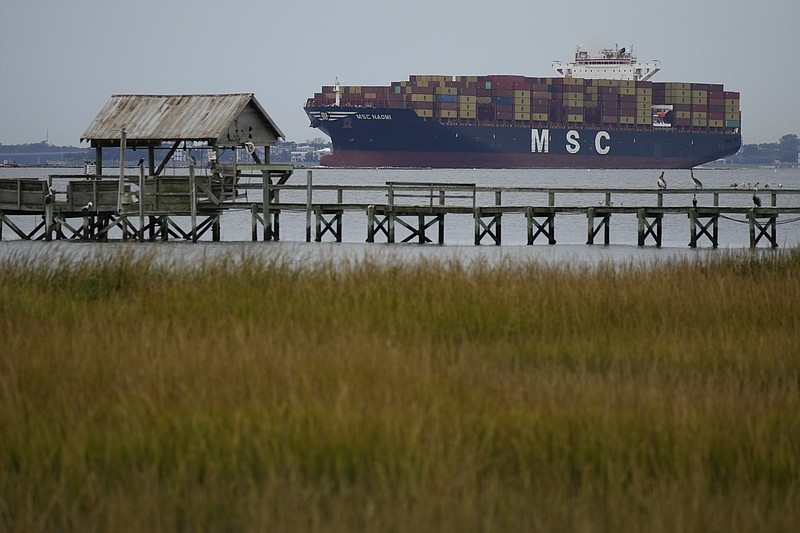 The MSC Naomi container ship sails out from from the port of Charleston, S.C.,Thursday, Oct. 28, 2021. Hampered by rising COVID-19 cases and persistent supply shortages, the U.S. economy slowed sharply to a 2% annual growth rate in the July-September period, the weakest quarterly expansion since the recovery from the pandemic recession began last year. (AP Photo/Rebecca Blackwell)

WASHINGTON -- The U.S. economy slowed to a modest annual rate of 2.1% in the July-September quarter, according to the government's second read of the data, slightly better than its first estimate a month ago. But economists are predicting a solid rebound in the current quarter as long as rising inflation and a recent uptick in covid cases do not derail activity.

The increase in the gross domestic product, the economy's total output of goods and services, is up from an initial estimate of 2% for the third quarter, the Commerce Department reported Wednesday. But the revision was still well below the solid gains of 6.3% in the first quarter this year and 6.7% in the second.

The small increase from the initial gross domestic product estimate a month ago reflected a slightly better performance for consumer spending, which grew at a 1.7% rate in the third quarter, compared with a 12% surge in the April-June quarter. The contribution to gross domestic product from business inventory restocking was also revised up.

The economy's weak summer performance reflected a big slowdown in consumer spending as a spike in covid-19 cases from the delta variant caused consumers to grow more cautious and snarled supply chains made items such as new cars hard to get and also contributed to a burst of inflation to levels not seen in three decades.

While covid cases in recent weeks have started to rise again in many parts of the country, economists do not think the latest increase will be enough to dampen consumer spending, which accounts for 70% of economic activity.

The expectation is that the economy in the current October-December quarter could grow at the strongest pace this year, with some economists predicting that gross domestic product could surge to an 8% rate in the fourth quarter.

For the whole year, the expectation is that the economy will grow by around 5.5%, which would be the best showing since 1984 and a big improvement from last year when the economy shrank by 3.4%. That was the biggest annual decline since an 11.6% plunge in 1946. when the nation was demobilized after World War II.

"After experiencing one of the most severe economic shocks of the past century in 2020, the U.S. economy has displayed one of the most rapid recoveries in modern history in 2021," Gregory Daco, chief U.S. economist for Oxford Economics, wrote in a note to clients. Daco predicted the economy in the current October-December period would rebound to a growth rate of 5.6%.

So far, the improving economy this year has not boosted the approval ratings of President Joe Biden because the U.S., with one of the most rapidly recovering economies, is also caught up in a global supply chain squeeze that is driving prices higher for everything from new cars and gasoline to the cost of food and airline tickets.

Biden this week nominated Federal Reserve Chairman Jerome Powell for a second four-year term to head the central bank. Powell and other Fed officials had earlier in the year insisted that the spoke in pries was being caused by temporary factors, such as those snarled supply chains.

However, recently the central bank has stressed that if the price increase persist it will be ready to start raising interest rates sooner than expected to slow growth as a way of dampening inflation pressures.

Mark Zandi, chief economist at Moody's Analytics, said he now expected the Fed to raise its benchmark interest rate twice next year, in September and December. Those rate increases would translate into higher borrowing costs for consumers and businesses.

But analysts don't believe the expected quarter-point rate increases will be enough to derail the recovery. They are also optimistic that the global pandemic will be less of a drag next year.

"I think each new wave of covid cases will be less disruptive to the economy because more people are getting vaccinated," Zandi said.

Print Headline: Economy sees drop in growth for its 3Q