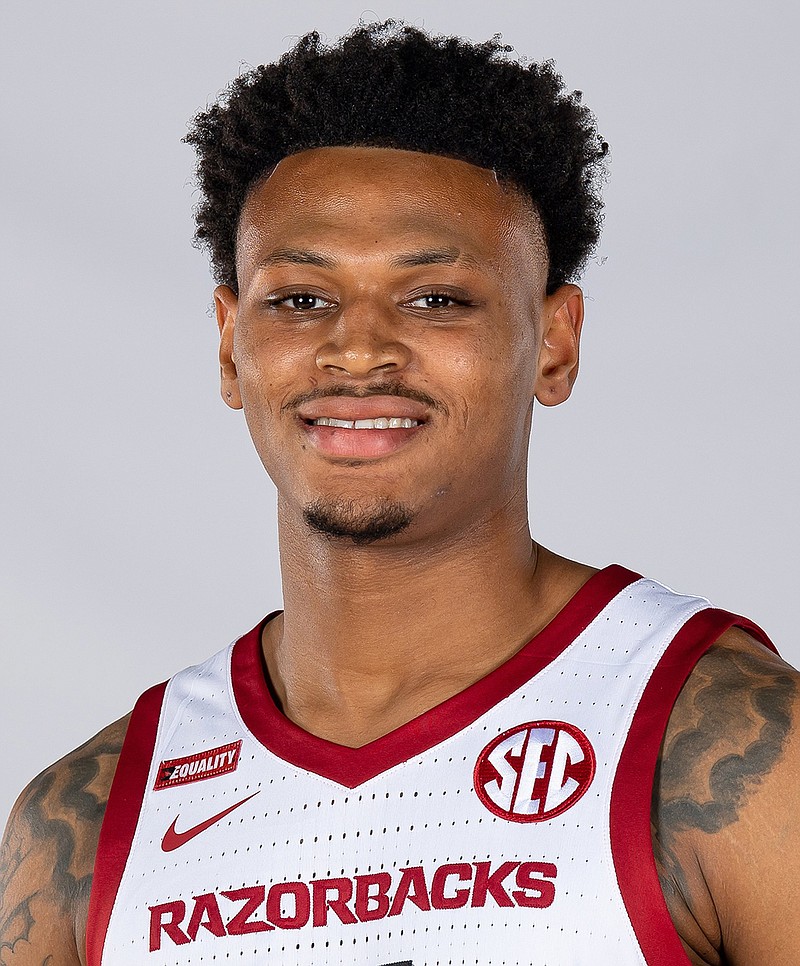 KANSAS CITY, Mo. -- Au'Diese Toney made it difficult to pinpoint what he did best to help the University of Arkansas beat Cincinnati 73-67 on Tuesday night.

Toney, a 6-6 senior guard, led Arkansas with 19 points and hit 6 of 9 from the field as the No. 13 Razorbacks won the Hall of Fame Classic championship game at T-Mobile Center.

[Video not showing up above? Click here to watch » arkansasonline.com/1125podcast/]

Toney, who had 13 points and nine rebounds in the Razorbacks' 72-64 victory over Kansas State on Monday night, was voted the Hall of Fame Classic MVP by the media.

"It feels amazing," said Toney, who was announced as MVP and picked up his award on the court as thousands of Arkansas fans in attendance cheered. "It's hard work.

"I've just been working so hard for this and my team. I couldn't do it without my team. We've just got to keep working now."

As Musselman has said after other strong games by Toney this season, the Razorbacks (5-0) didn't set him up to score in the tournament games.

"We did not call one single play for Au'Diese," Musselman said. "His cutting is extremely valuable to us. His finding open holes in the teeth of the defense, extremely important.

"His ability to offensive rebound, get us extra possessions, get put-backs. He's at that size that's really, really important for how we want to play."

"He keeps getting better," Musselman said. "I think our style of play is much, much different than what he's used to playing.

"I think he was a little bit uncomfortable at the beginning with how we play and how free we play ... I think the offensive freedom is a little bit unique for what he's used to and I think he's really, really finding a great groove now in what we want him to do and the freedom that he can play with."

In 79 games at Pittsburgh the previous three seasons, Toney handled the ball more and hit 58 of 191 three-pointers. He's hit 1 of 2 three-pointers for the Razorbacks.

Arkansas has strong perimeter players in senior guards JD Notae, Chris Lykes and Stanley Umude, and sophomore guard Davonte Davis, but the Razorbacks need inside scoring and rebounding from Toney.

Toney said his offensive production now revolves around "finding the spots" on the floor where he can attack the defense and the rim.

"That's all it is, just finding your spots and opportunities when you get it," he said.

If Toney hadn't scored a point Tuesday night he still would have played a valuable role in shutting out Davenport, who came into the game averaging a team-high 13.8 points and scored 19 in Cincinnati's 71-51 victory over No. 14 Illinois on Monday night.

Davenport was held scoreless for the first time in 29 games, going back to the 2019-20 season finale when he was scoreless in three minutes off the bench in Wichita State's 67-64 victory over Cincinnati.

Cincinnati was minus-15 points in the 22 minutes Davenport was on the floor and defended by Toney. He shot 0 of 4 from the field, including 0 of 2 on three-pointers, didn't get to the free throw line and had two turnovers.

"Au'Diese Toney is probably one if the best wing defenders in the country," Cincinnati Coach Wes Miller said. "He made it difficult for [Davenport] to catch and shoot."

Davenport came into the game shooting 45.8% from the field and 40.3% on three-pointers. He hit 4 of 8 three-pointers against Illinois and 5 of 6 free throws.

"Coach told me Davenport was a really good scorer, that he gets them going," Toney said. "If he's not going, their team's not going.

"The whole night I was just thinking about how I'm going to shut this guy down and run him off the three-point line. I just did my job what Coach wanted me to do."

Toney had six offensive rebounds against both Kansas State and Cincinnati. Of his 40 rebounds this seasons, 19 are on the offensive end.

"Toney is like a nightmare on the offensive boards," Miller said. "He was just extremely impressive."

Toney's aggressiveness helped the Razorbacks out-rebound the Bearcats 46-32 after Cincinnati came into the game with a plus-8.0 rebounding margin.

Toney said his game is all about competing.

"That's the main thing I love to do," he said. "I love this game. I love this sport.

"Ever since I was little, I've just had that grit to compete day in and day out. Just staying humble in it every day.

"Play your heart out. You never know when your last day is on Earth, so you always have to play and compete."