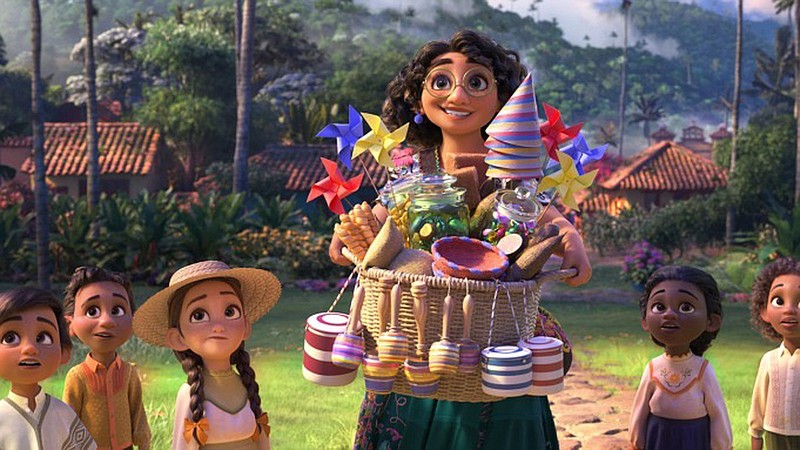 In Disney’s “Encanto,” 15-year-old Mirabel Madrigal (voiced by Stephanie Beatriz) is the only member of her family without magical powers. She can, however, play the accordion passably well.

Rating: PG, for some thematic elements and mild peril

As its title implies, Disney Animation's 60th feature "Encanto" has a charm that helps compensate for a story that's a little shy of the magic it needs.

Yes, it's a cartoon, but Pinocchio had to learn how to behave responsibly to become a real boy, the Beast had to learn to love and be loved to regain his princely looks, and the critters in "Zootopia" had to recognize their fellow animals for what they are instead of what they thought they were.

Even in make believe, there are rules. How the film follows or breaks those rules determines how entertaining it will be.

Directors Jared Bush and Byron Howard were the masterminds of "Zootopia," and they fill "Encanto" with endearing characters and a captivating atmosphere. They and Charise Castro Smith set the new movie in Colombia and work in the local culture in a delightful manner.

The village of Encanto has been the home of the Madrigal family for three generations after they fled to the countryside to escape oppression.

Abuela Alma (Maria Cecilia Botero) pretty much founded the village with a candle that helped build her magnificent home and gave special powers or gifts to her children and grandchildren. One daughter can heal the residents with her cooking, and one of her granddaughters can lift a pile of donkeys without straining her muscles.

The Madrigals are understandably popular in "Encanto" because they can solve problems ordinary mortals can't. Well, that's true except for Bruno (John Leguizamo). He has a knack for knowing the future, and those premonitions have sent him into seclusion.

His relatives and neighbors may not want to know what's tormenting him.

Alma's granddaughter Mirabel (Stephanie Beatriz, "In The Heights," "Brooklyn Nine-Nine") is still proud of her roots, but she also has trouble living up to them. Unlike the rest of clan, she has no discernible gifts. Like Bruno, she can tell the candle is starting to flicker and is having trouble trying to figure out how to keep the flame and the spell going.

If the story arc gets frustrating, the images and sounds more than compensate. The screen is awash with appealing color, and Lin-Manuel Miranda's songs are expectedly catchy and clever. You want Mirabel to take her shot and sing about it, too.

Thanks to its genial tone, "Encanto" still manages to keep the Disney legacy without feeling as if Bush, Howard and Castro Smith are stuck in Uncle Walt's mold. South America was a wonderful setting for Disney's World War II propaganda films, and it gives his successors lots of fresh ideas as well.