Saying words before a meal a grounding ritual amid a tumultuous year by Emily Heil The Washington Post | November 27, 2021 at 3:27 a.m. 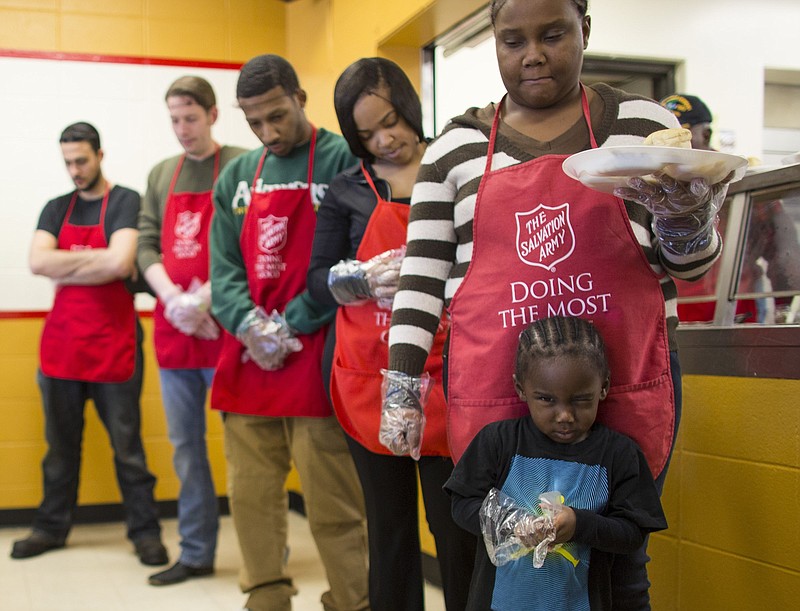 Salvation Army volunteers bow their heads in prayer before serving a pre-covid Christmas dinner in Little Rock. Almost half of all Americans said they regularly took a moment before meals to give thanks, according to a 2017 poll by The Washington Post and the Kaiser Family Foundation. (Arkansas Democrat-Gazette file photo)

Brett Levanto and his family had never said grace before meals, not regularly, anyway. But what began as a temporary challenge transformed them in small ways.

This year, his daughter decided to start saying grace before dinner during Lent, and he and his wife were encouraging, thinking it would be a nice thing to try out. He was surprised at the effects it had.

"It's just been lovely. I really dig the way it creates a structure," says Levanto, 38, who lives in Alexandria, Va., and works for a small lobbying and law firm. "Everyone has to get to the table and be together and not be distracted. We focus on where we are."

They all say "amen," and then dinner is off and running. Although the grace might take less than a minute, it sets a crucial tone. "It creates a grounding feeling -- a moment of stillness," he says. "I feel like our dinners at home are much better now -- like, 'Now we are together, and this is what we're doing.' I mean, I'm not going to say we have Rockwellian dinners or anything."

He is referring to Norman Rockwell, of course, whose images of wholesome middle-American dining include the iconic "Saying Grace," painted for the cover of the Saturday Evening Post in 1951. It depicts a young boy and an older woman bowing their heads in a crowded diner, as other patrons, seemingly engaged in the more familiar rituals of modern life -- smoking or reading the newspaper -- look on. At the time, it might have felt to many Americans that this tradition was fading.

But it hasn't. The state of grace in contemporary America is hard to quantify, though the practice remains prevalent: Almost half of all Americans said they regularly took a moment before meals to give thanks, according to a 2017 poll by The Washington Post and the Kaiser Family Foundation.

The act of saying grace -- broadly defined as a moment before a meal in which people give thanks -- varies.

For Pat Cuadros, the words are always the same: The Catholic grace that begins "Bless us, O Lord, and these Thy gifts ..." has always been the start to her meals. The setting varies, though. She has said those words -- sometimes to herself, silently, or aloud when she's with other observant friends -- in Chipotles, in airplanes, and in restaurants -- or over a Thanksgiving meal.

If she were dining with a new friend, she'd ask if it was OK to take a moment to pray silently before they ate. "Everyone has always been OK with it," says Cuadros, a 34-year-old writer and editor for the Department of Agriculture who lives outside of Fairfax, Va. "It can be a conversation starter. But in college, I always had a backup plan -- I would think, 'If it's going to be really awkward, I can pray in the car ahead of time.'"

Cuadros says the ritual feels automated in some ways -- after all, she has repeated the same words thousands of times. Still, she always finds meaning in them, and relies on the practice to remind her of her family and values.

"It doesn't ever lose meaning because I am truly grateful, and I know the moment is going to fortify me and reinvigorate me for the day," she says. "Growing up in a single-parent home, you really do appreciate every meal."

To Kenneth Minkema, executive editor of the Jonathan Edwards Center at the Yale Divinity School, grace serves several purposes. Reciting the same words together or participating in a regular ritual creates a feeling of connection with those around us, he says. "It serves to strengthen and confirm the bond of family or community," he says. "It helps to acknowledge that we are one." And across religions, it is also an acknowledgment of the source of the food before you. "There is the creator/God but also other people, the earth, and the moral responsibilities that go along with that," he says. "It also has a way of pulling you inward and reminding you of those responsibilities."

People who routinely say grace do so for reasons spiritual and practical.

Terrence Geary, 50, a food-systems consultant and real estate professional in Newport, R.I., didn't usually say grace at home with his wife and their young son. But his son recently stumbled on a pre-meal meditation track on his wife's phone, and became entranced with it. At first, Geary -- who is an avowed food lover -- says he found himself impatient as he watched his piping-hot rigatoni grow cold while the family followed the instructions to appreciate the smells and the colors of the dishes before digging in.

But he came around, he says, once he realized how the repeated ritual offered his son structure and stability -- something that has been in short supply in these turbulent times. "We moved around a little in the last year and a half," Geary said. "So anything we can do to make him feel at home and feel grounded, like life is getting back to normal, is a good thing."

A pre-meal ritual can offer moments of levity and seriousness.

When Anna Saufferer's extended family gathers -- and they do, a lot, for birthdays and holidays, even the minor ones -- the tradition is to do a pre-meal "nose goes" game. The last person to touch their nose is the one to say the blessing.

"Someone is always too busy chatting or drinking their wine to notice," she says. "Then some of the aunts and uncles might give a long-winded one, or the kids might go, 'God's neat, let's eat!' It's a fun way to keep everyone on their toes and to make it not just the parents' responsibility."

Saufferer, a 25-year-old public-relations manager in Seattle who attends a nondenominational Christian church, usually says a short, traditional grace when dining with her immediate family: "Come Lord Jesus, be our guest, and may these gifts to us be blessed," which is a variation on a common Christian prayer thought to have Lutheran roots. Other relatives say their own graces in their homes, too. But she says adding the game when they all get together for meals creates a special feeling of togetherness, which they haven't been able to enjoy in the last year and half, when the pandemic has made big gatherings impossible. "I'm excited to get back to family," she says of the forthcoming holiday celebrations. "And no matter what, there are small blessings and gifts that we can turn to, and [saying grace] helps us get our mind and hearts ready."

Rathi, 52, says it connects him to his spiritual master, the swami Shivom Tirth Mahara, and of his teachings. And it serves as a daily reminder, he says, to consider how interconnected humans are. "No matter what is going on, I try to reflect on the day," he says. "I think about what I might have done, and I hope I will not make the same mistake tomorrow. We all need to be compassionate and tolerant of each other in this world."

That kind of intentional slowing down is what saying grace is all about, says Tim O'Malley, the academic director for Notre Dame's Center for Liturgy. "If you think about the modern household, it's efficient -- we get together, we eat, we run," he says. "Saying grace is a note of slowing down." And he thinks that as we become more distant from the source of our food, whether that is the life of the animal we are eating or the hands of the people who picked the produce, we might forget to be thankful for them. "It might be the most damning thing in modern culture, that receiving without gratitude," he says. Saying grace, though, "is medicine to the ingratitude that we can develop." 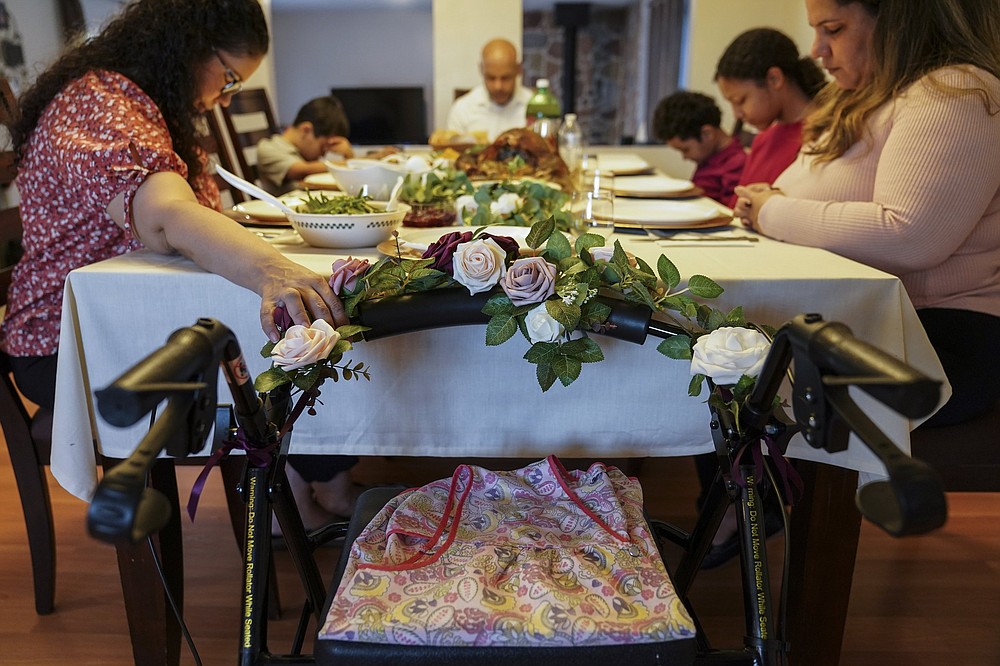 The Zayas family in Deer Park, N.Y., which said grace before eating their Thanksgiving dinner last year, left a spot at the table for Vivian Zayas, who had died on April 1, 2020, at age 78, while recovering from knee replacement surgery. For many Americans, pre-meal prayers are a ritual, not only during the holidays, but year round. (AP/John Minchillo) 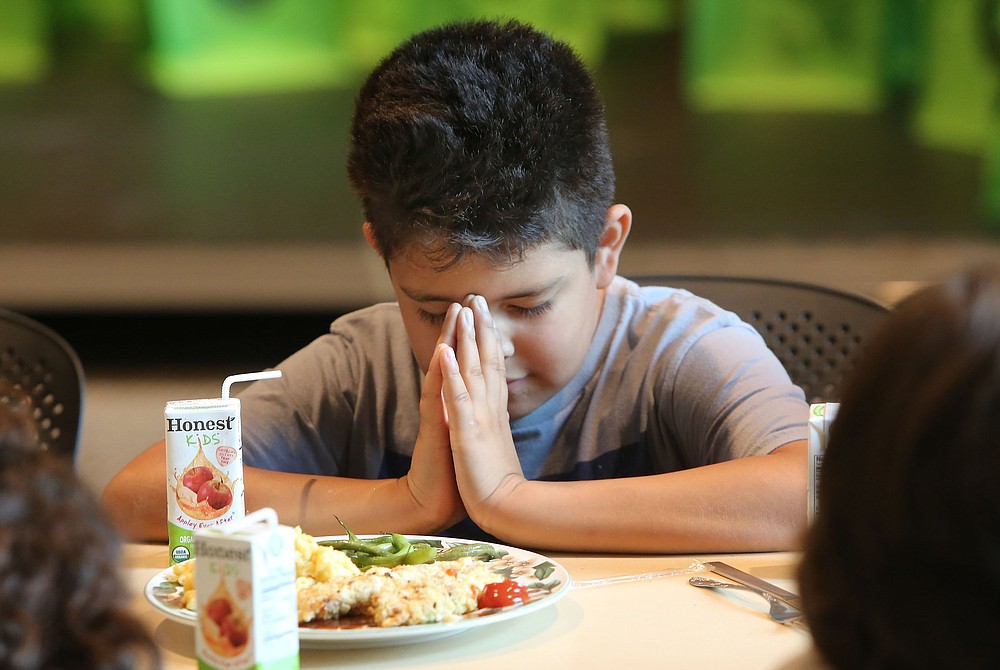 Orestes Cortez joins other participants in the LifeSource International Kids Life Camp in saying grace before eating a meal in Fayetteville in 2017. (NWA Democrat-Gazette file photo)