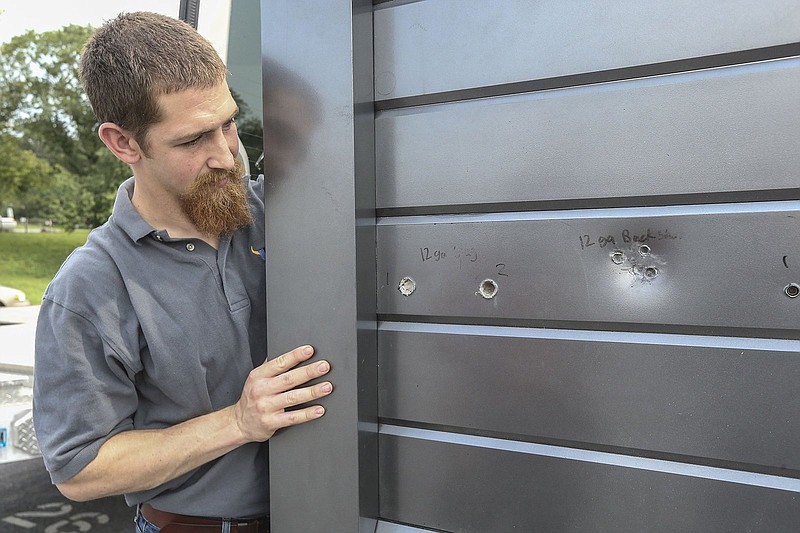 At the company’s facility roughly 50 miles west of Philadelphia, Compass Ironworks’ George Settle stood beside a test panel that can stop 12-gauge shotgun slugs and buckshot. Amish workers are creating bullet-resistant barriers, which are being used to enhance security at key locations, including a Jewish school in New York. (Steven M. Falk/The Philadelphia Inquirer/TNS)

The Amish crew from Compass Ironworks in Chester County, Pa., arrived early at the Jewish school in New York on a sticky morning near the end of summer vacation.

They had spent more than a year planning details of this bullet-resistant-barrier installation, using Compass' own product -- polished segments of bulletproof steel walls and posts.

Ironworks owner Amos Glick calls them "Bullistic Barriers," as if to remind customers of both the firm's farm-country west of Philadelphia and its anti-weaponry mission.

The straw-brim-hatted workers descended on the schoolyard with tape measures, string -- and a laser, bought off-the-shelf but refitted by Compass staff to run on battery power. That enabled them to observe Amish scruples, blocking reliance on commercial electric power and other systems from outside their 300-year-old, German-descended Christian community.

Some of their other power tools ran on closed hydraulic systems, likewise bypassing the city's electric utility.

"The cornerstone had to be perfect. They spent the better part of a day measuring," Glick's client, school administrator Menachem Chernoff of Rabbi Chaim Berlin high school, said. "They were extremely professional and diligent."

"The students, they wanted to see how everything worked," Glick marveled. "They had a hard time staying on their studies that day. There is a lot of similarities in our communities."

Glick's crew included two of his seven children, Benjamin, 20, and Aaron, 16. This family, faith, and community approach struck a chord with Compass' observant Jewish clients, the administrator added: "I appreciated that [Glick] was trying to keep within the culture and the laws of his community, while at the same time trying to build his company and do a living."

School agents found Compass at a security show in May 2019 during their search for bulletproof fencing, as parents worried about attacks like the fatal Tree of Life synagogue shooting in Pittsburgh in 2018. There were few alternate vendors, none with directly applicable experience. And their quotes were much higher. Bullistic Barriers start at $500 a foot and can cost up to $5,000 a foot, depending on the level of bulletproofing needed.

"We are extremely happy," Chernoff concluded after the nearly block-long, smooth-faced, heavy steel fencing and posts were installed, shielding student areas from potential attackers coming from the nearby street. "We definitely feel more secure."

With his brimmed hat and wide beard, Glick, 45, looks the part of a Lancaster County farm kid who learned ironwork from his early job at a commercial foundry. Yet, he also polished his craft by studying early 1900s designs from Italian American masters based in Philadelphia.

Much of his business, which has about a dozen employees, has been installing wrought-iron balconies, fences, gates, and decorative flourishes for big houses from the Main Line to the Jersey Shore. But in recent years, his business has veered into security.

Glick says he was preparing to launch Bullistic Barriers wall installations and a fast-to-assemble sister system called RaDeBuRe -- short for rapid-deployment, bullet-resistant riot fence -- even before the pandemic.

"I was hearing, 'I want a privacy fence, make it beautiful' so it complements institutional architecture and reassures without sticking out as a crude reminder of the sudden dangers that can threaten modern life."

But the broad range of protests in recent years and the attack on the U.S. Capitol on Jan. 6 gave the business an impetus he has exploited in marketing materials.

Using specifications from the International Security Council and the American Fence Association, Glick said his group designed "Level 3 barriers, which will stop a handgun; Level 8, that will stop rifles, like an AK-47 or AR-15. Some of them want to stop .50-caliber (Level 10). We said, 'OK, we can develop a product that will stop a .50-caliber full-metal jacket and armor-piercing round, 15 feet tall.'"

In a testimonial, Curt A. Martinez, police chief in West Caln Township, called RaDeBuRe "another tool that could assist police and security officials," helping "save a lot of man-hours and time" in closing streets amid unrest and "protecting people and their possessions."

When Glick's team developed the products, at first "everyone was thinking we might use Kevlar armor plate" from DuPont, Glick recalls. "But I said, 'We're not going to take that approach,' given the cost and the aesthetics."

"We looked at laminates, composites, with rubber and plastic. Would they be stable in a [hot] environment, like South Florida? You name it, we did informal ballistic testing, and zeroed in on what works."

They settled on an alloy-metal skin with a coating that Glick calls a "secret potion." Compass built and tested garage doors with the combination. "Then we applied for a patent and started presenting it at the trade shows, like the 2018 American Society for Industrial Security at the Javits Center" in New York.

Early calls flooded in from government offices, including a West Coast foreign consulate, as well as school and religious-minority groups.

"We came up with a design that would allow you to set up a fence across the Capitol steps and other uneven terrain."

The first installation was at a day-care center run by a "significant global company" that Glick said doesn't want to be named. It's in the Midwest, in a neighborhood where a toddler was killed in a shooting a few blocks away earlier this year.

The Amish use firearms, like other tools, for hunting. But they reject violence in their own dealings. Glick sees no inconsistency between his Amish beliefs and a business that responds to the threat of violence.

"It's a very controversial issue, and I don't know the answer," Glick said. "But I know we have a product that gives safety."