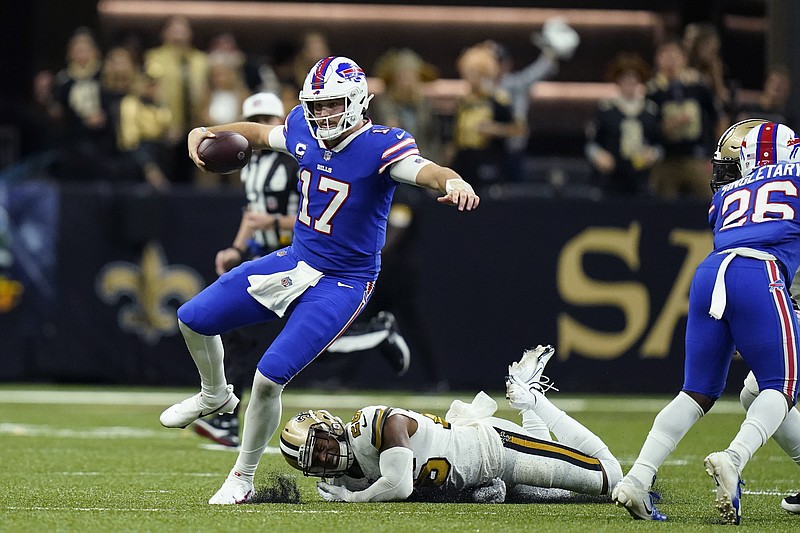 Close games and unpredictable outcomes have been a staple this NFL season.

Thanksgiving Day was the latest example.

The Bears beat the Lions on a last-second field goal. The Raiders upset the Cowboys on a field goal in overtime.

The league and the networks must love it, and fans stay entertained.

Going into Thursday, the 23 games decided by a winning score on the final play were the most such games through Week 11 in league history. Victories by Chicago and Las Vegas increased that total to 25.

So far, 39 games have been decided by a game-winning score in the final two minutes of regulation or in overtime.

There's more parity now than anytime in recent years, and it's a wide-open race to the Big Game.

Last week, three teams without a winning record beat a club that was in first place or tied for first. Since Week 9, that's now happened 12 times.

Each team in both the AFC West and AFC North currently has a winning record. At least 10 teams have a legitimate shot to reach the Super Bowl. There's only about seven that don't have a real chance to make the playoffs.

Here's a look at 10 clubs, in no particular order, who have the best chance to be in Los Angeles for Super Bowl 56.

Despite two consecutive losses, the Cowboys (7-4) have shown they have plenty of firepower -- Dak Prescott leads the league's No. 1 offense -- and an improved defense. They were missing wide receiver Amari Cooper the past two games after he tested positive for covid-19, and didn't have wideout CeeDee Lamb in a 36-33 overtime loss to the Raiders because of a concussion. Dallas faces only one team that currently has a winning record over its last six games.

If Aaron Rodgers is healthy, the Packers (8-3) should be playing in late January with an opportunity to extend their season to February. But Rodgers is nursing a fractured toe and the team is missing several key players because of injuries, including offensive linemen David Bakhtiari, Elgton Jenkins and Josh Myers, linebacker Za'Darius Smith, cornerback Jaire Alexander and tight end Robert Tonyan.

Tom Brady is having an MVP-type season at age 44 and the defending champion Buccaneers (7-3) are in control of the NFC South so they probably won't have to take the wild-card route the way they did last season. The offense still isn't clicking completely and a defense that has been ravaged by injuries isn't playing like the one that shut down Patrick Mahomes and the Chiefs in the Super Bowl last season. The Bucs have a tough road game Sunday at Indianapolis and host Buffalo next month before finishing with four games against teams that have losing records as of now.

The NFC West-leading Cardinals (9-2) will be atop the conference standings when they return from their bye next week. They showed their depth by winning two of the past three games without their two most prolific offensive playmakers: quarterback Kyler Murray and wideout DeAndre Hopkins. Arizona has a balanced offense and the league's fifth-ranked defense.

The Rams (7-3) have been all-in to win now with acquisitions of several high-profile stars from Matthew Stafford before the season to Von Miller and Odell Beckham Jr. during the season. But following a 7-1 start, they lost to the Titans and 49ers before a bye. They're underdogs Sunday at Lambeau Field and still have road games against the Cardinals, Ravens and Vikings.

A fashionable pick to win it all before the season, the Bills (7-4) have been wildly inconsistent. They lost to lowly Jacksonville and were blown out at home by the Colts in the past three games before rebounding with a 31-6 win over the injury-depleted Saints on Thursday night. All seven wins have come by at least a 15-point margin. If Josh Allen plays down the stretch like the MVP candidate he was last season, the Bills and their top-ranked defense can make those preseason prognosticators look smart.

After a one-year hiatus from the playoffs following Brady's departure, Bill Belichick has the Patriots (7-4) back in a familiar position. Rookie quarterback Mac Jones has exceeded expectations and New England's stingy defense keeps the team in games. The Patriots have four difficult games coming up, starting with Tennessee on Sunday.

Before losing to the Texans, the Titans (8-3) had run off an impressive streak of six consecutive wins, including five in a row against teams that reached the playoffs in 2020. They'll miss Derrick Henry even more as the season goes on, especially if Ryan Tannehill plays like the guy who tossed four picks against Houston.

Despite a slew of injuries to several starters, the Ravens (7-3) lead the AFC North and have a run game led by Lamar Jackson that's been a winning formula in December. The main concern for Baltimore is a usually strong defense has struggled this season.

Mahomes and the Chiefs (7-4) are back on track after a rough start. They've won four in a row and have shown a ton of improvement on defense. Kansas City doesn't have an easy road to its third consecutive AFC title. The final six games are against opponents that are .500 or better entering Week 12. 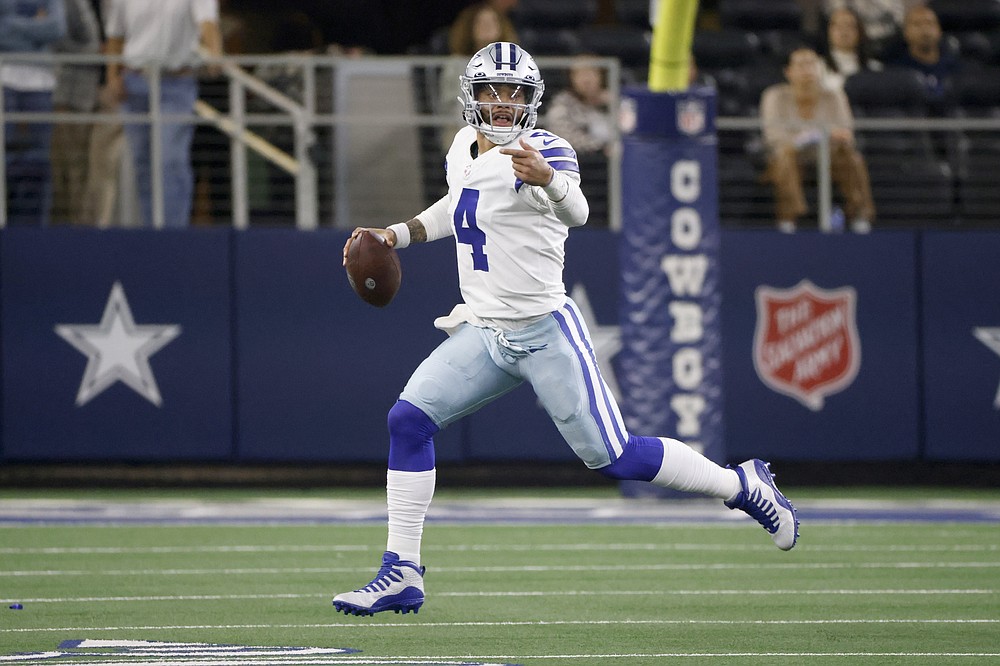 Dallas Cowboys quarterback Dak Prescott (4) scrambles before throwing a pass in the first half of an NFL football game against the Las Vegas Raiders in Arlington, Texas, Thursday, Nov. 25, 2021. (AP Photo/Ron Jenkins)