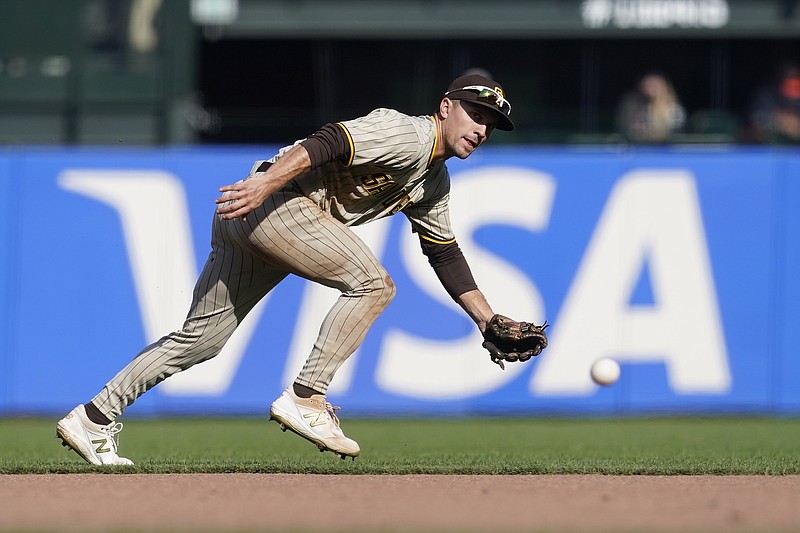 Seattle's first big move of the offseason was completing a deal president of baseball operations Jerry Dipoto tried to make last summer. The Mariners finally landed Adam Frazier on Saturday, acquiring the All-Star second baseman in a trade with the San Diego Padres. The move cost Seattle two minor leaguers, but it addresses one of the team's biggest needs entering the offseason; adding a middle infielder to pair with shortstop J.P. Crawford. Frazier's versatility means the Mariners can still be aggressive with other possible transactions should another middle infielder become available. The Padres acquired left-handed reliever Ray Kerr and outfielder Corey Rosier. Kerr was added to the Mariners' 40-man roster just last week. He split time between Double-A Arkansas and Triple-A Tacoma last season. Rosier was a 12th-round pick in the 2021 amateur draft out of UNC Greensboro. He spent last season at Single-A Modesto. Frazier got off to a fast start last season with Pittsburgh, batting .324 with an .836 OPS and 28 doubles in 98 games. He was traded to San Diego in late July and faded over the final two months. In 57 games with the Padres, Frazer batted .267.

Wander Franco and the Tampa Bay Rays have finalized an $182 million, 11-year contract that includes a club option for the 2033 season. The shortstop's deal, which could be worth up to $223 million if the club option is exercised and incentives are reached, was announced Saturday. The contract is the largest financial commitment to a player in the Rays' 24-year history. It's also the biggest deal in major league history for a player with less than a year of major league service time.

The Boston Red Sox have signed Michael Wacha to a $7 million, one-year deal, adding the right-hander to an already thin rotation that lost Eduardo Rodriguez in free agency. The team announced the contract on Saturday. Wacha, 30, was 3-5 with a 5.05 ERA last season for Tampa Bay. He was 1-1 with a 2.88 ERA in seven appearances from Aug. 28 on, ending the season with back-to-back, scoreless five-inning starts in which he allowed a total of one hit. Wacha is 63-48 with a 4.14 ERA in nine major league seasons, also playing for the Cardinals and Mets.

Curley Culp, the Hall of Fame defensive lineman who helped the Kansas City Chiefs win their first Super Bowl during a 14-year NFL career, died Saturday of complications from pancreatic cancer. He was 75. Culp announced this month that he had been diagnosed with stage 4 cancer. His wife, Collette Bloom Culp, announced "on behalf of our family and with a broken heart" the five-time All-Pro's death. "The entire Pro Football Hall of Fame family mourns the passing of Curley Culp. He was a wonderful man of great integrity who respected the game of football and how it applied to everyday life," Hall of Fame President Jim Porter said. "Curley's humility and grace were always apparent." Culp was considered one of the strongest players in the NFL during his playing career, though his position on the interior of the defensive line meant his play often went unnoticed. He was chosen to participate in six Pro Bowls, and he was second to Steelers cornerback Mel Blount for AP Defensive Player of the Year after the 1975 season. It wasn't until long after his playing days -- Culp retired in 1981 -- that he was finally inducted into the Hall of Fame. But after his enshrinement in 2013, Culp proudly wore the golden jacket of a Hall of Famer seemingly everywhere he went.

The San Francisco 49ers have activated linebacker Dre Greenlaw off injured reserve to play today against the Minnesota Vikings. Greenlaw (Fayetteville, Arkansas Razorbacks) injured his groin in the season opener and was on injured reserve until being activated on Saturday. Greenlaw returned to practice last week. Greenlaw had six tackles and returned an interception for a touchdown in his only game this season.

Steelers' DB out vs. Bengals

Pittsburgh Steelers cornerback Joe Haden will miss today's visit to Cincinnati due to a sprained foot. The team ruled Haden out on Saturday. The club had listed Haden as questionable on Friday. Haden got hurt during a 16-16 tie with the Detroit Lions on Nov. 14 and did not play during last weekend's loss at the Los Angeles Chargers. The Steelers also placed tight end Eric Ebron and offensive lineman J.C. Hassenauer on injured reserve after both were hurt against the Chargers. Ebron is dealing with a knee injury while Hassenauer has a pectoral issue.

South African golfer Thriston Lawrence won the Joburg Open on Saturday after the third round was abandoned because of bad weather, meaning the result was called after 36 holes of the inaugural event on the DP World Tour. The event had been reduced to a 54-hole tournament late Friday to help non-South African resident players, caddies and support staff at the tournament return to their home countries, a move triggered by international travel restrictions being imposed on South Africa because of the emergence of a new covid-19 variant in the country. Lawrence had a four-shot lead at the end of the second round, having shot 65-65 to be on 12 under par overall. He claimed his first win on what was formerly named the European Tour, earning the No. 503-ranked player full membership. Former University of Central Arkansas golfer Pep Angles of Spain finished in a tie for 23rd with a 2-under 140.

Austria's Matthias Mayer won the season-opening World Cup men's downhill Saturday at Lake Louise, Alberta. Mayer finished in 1 minute, 47.74 seconds. Fellow Austrian Vincent Kreichmayr was second, followed by Switzerland's Beat Feuz in third at 1:48.09. Feuz was the overall leader in men's downhill last season, followed by Mayer. Saturday's race served as the season opener after a downhill scheduled for Friday was canceled because of too much snow. Today's super-G caps the weekend for men's World Cup.

After 21 years since last playing in Australia, the United States women's soccer team needed only 24 seconds to score against the Matildas on Saturday. Turns out that was all the new-look American side needed in a 3-0 win at Sydney's Olympic stadium before a Matildas-record crowd of 36,109. Ashley Hatch scored her first international goal when Australia's defense failed to clear the ball from the opening kickoff, and Hatch found herself one-on-one with goalkeeper Teagen Micah. Hatch calmly slotted a low shot to the right of Micah. Rose Lavelle scored the second American goal in the 49th minute and captain Lindsey Horan finished the scoring from a penalty in the 68th. Australia dominated much of the first half after Hatch's first-minute goal. U.S. goalkeeper Casey Murphy -- in her international debut -- was the player of the opening 45 minutes as she saved a half-dozen chances, including two from Australia veteran Sam Kerr. The best Australian chance came from Kyah Simon, who missed from inside the six-yard box when the goal was open.