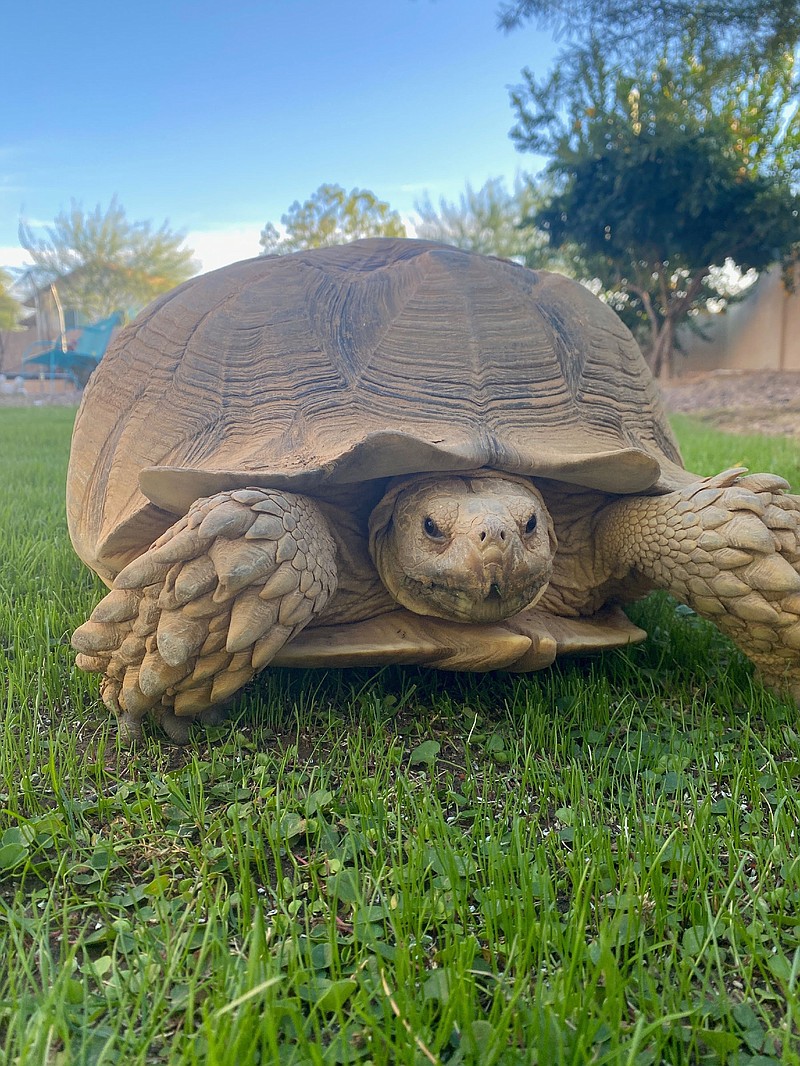 Bianca is named after the female protagonist in the 1977 Disney film, "The Rescuers." CREDIT: Courtesy of Michelle Fortin

When an Arizona family couldn't find its beloved 1-year-old French bulldog, it assumed the worst.

It was a relatively peaceful Sunday morning at the Fortin household in Scottsdale, Ariz. Around noon, though, chaos broke out.

Michelle Fortin was folding laundry, when her 10-year-old son, Kenton, sprinted up the stairs and hollered: "Is Bruce up there?"

Bruce is named after Bruce Wayne from "Batman." The family also has a 15-year-old sulcata tortoise named Bianca after the female protagonist in the 1977 Disney film "The Rescuers."

Fortin, her husband, Jason, and their two children started searching around the house for Bruce, but he was nowhere to be found. Before long, the family of four began to panic.

"We worried that maybe he was stolen from our backyard," Fortin said.

The Fortins mobilized. Within an hour of Bruce's disappearance on Nov. 21, they started scattering "lost dog" posters around their neighborhood and went door-to-door, hoping he wandered to a nearby home. They also filed a police report.

After searching with no luck, Fortin decided to do a second scan of the house.

When she got to the backyard, she heard a muffled barking sound, but couldn't pinpoint where it was coming from. Then, her eyes peered over to Bianca's burrow.

"I approached the tortoise burrow, and I could hear Bruce barking from under the ground," Fortin said.

Indeed, the dog had wandered into the tortoise burrow, which the family later learned is about 6 feet deep and nearly 3 feet wide -- and it's at a 45-degree angle.

"I had absolutely no idea how we were going to get him out," Fortin said, adding that they feared Bianca -- who weighs 50 pounds, about double Bruce's weight -- was blocking Bruce from exiting the deep, dark cave.

"I didn't know why the tortoise wasn't coming out, because I couldn't imagine she wanted to be with him down there," Fortin said, explaining that the two animals aren't exactly the best of friends.

The situation escalated when their son Kenton attempted to descend into the burrow, and he confirmed that the dog was, in fact, trapped by the tortoise. The family decided to call for backup.

They started by reaching out to a local tortoise rescue organization, which was closed, because it was a Sunday. Their next call was to the Scottsdale Fire Department.

"I felt ridiculous, but I had no idea what to do or who to call," Fortin said.

When she explained the somewhat-comical crisis to the dispatcher, she was urgently advised to remove her son from the burrow immediately. A crew of firefighters arrived at the scene within 10 minutes of the call.

Daniel Espinoza, a fire captain, showed up with three other firefighters -- all of whom were baffled by the situation.

"When I read the dispatch, I couldn't believe it," Espinoza said. "It was one of the most unusual animal rescues I've ever been called to."

The four firefighters worked to hatch a plan, but to no avail. Given that they were unfamiliar with burrows -- and had never encountered a situation in which a small dog was trapped by a massive tortoise -- they were at a loss.

Plus, the pressure was on: "You could hear the panic in the dog's bark, and it made the little girl start to cry," Espinoza said, referring to the Fortin's 9-year-old daughter, Camille. "That broke our hearts."

"Even though we didn't know what we were going to do, we decided we're not going to leave until we figure it out," he said.

They considered digging into the burrow, but they feared it might collapse, which would have had dire consequences for both animals. They decided to contact a wildlife expert for further insight.

Johnson has seen a lot in his career, he said, but "I've never had a dog go into a tortoise hole, and the tortoise block him from getting out."

He added that Bruce might not be the brightest pup out there: "We're not going to put him in the top 10 of the obedience class."

Everyone involved in sorting out the incident was breaking new ground, literally.

Johnson's biggest concern, he said, was that the tortoise was compressed against the dog, and might ultimately suffocate him. Still, he had a keen sense of what to do to save both animals before it was too late.

He advised the firefighters to dig delicately, using shovels and a pickax, to keep the structural components of the tunnel intact, starting at the entrance of the burrow.

Although they now had a plan in place, the scene remained suspenseful.

Tensions mounted about 40 minutes after the firefighters arrived, when the dog -- who they believe had been underground for nearly three hours at that point -- suddenly stopped barking. Fortin decided to bring her children inside.

The captain looked at her and said, "Ma'am, we are going to do what we can to give the dog the best chance," Fortin recalled. "That's when I was like, 'This could very well not have a happy ending, and our dog could get buried in front of my kids and scar them for life.'"

A few moments later, "we were praying and crying, and all of a sudden my husband came running in, yelling, 'Get out here!'"

The persistent digging had prodded the tortoise to peek out to see what all the commotion was. Once they caught Bianca by her shell, Bruce came bolting out of the burrow.

"I was mad and sad and happy," said Fortin, who recounted the escapade on her Instagram page, in a story highlight she called: "BRUCE THE IDIOT."

Everyone rejoiced with hugs, tears and beaming smiles, including the firefighters, who said the endeavor, albeit bizarre, was very rewarding.

"We were relieved," Espinoza said. "We hate to disappoint people, especially children."

After the sweet reunion between the family and their pets, Fortin and her kids baked cookies for the Fire department, as well as for their neighbors who stepped up to help before Bruce was rescued from the reptile.

"We're so grateful to them. They really saved the day," Fortin said of the firefighters.

Johnson echoed her sentiment: "They are the reason the dog is alive. It could have been a horrible situation. The firefighters did a fantastic job."

The near catastrophe turned out to have a happy ending for all.

Aside from being exceptionally thirsty, Bruce was his usual hyper self after exiting the hole.

Fortin promptly hired a dog trainer to teach him that even though he's named after Bruce Wayne, Bianca's burrow is not his Batcave.

"We will make sure it doesn't happen again," Fortin said.

Although it was certainly an emotional roller coaster for the family, Fortin said that in the end it was a feel-good story and quite a memorable afternoon.

"How many people can say that they had to call the Fire Department to rescue their dog, who was trapped by their tortoise in their backyard?" she said. 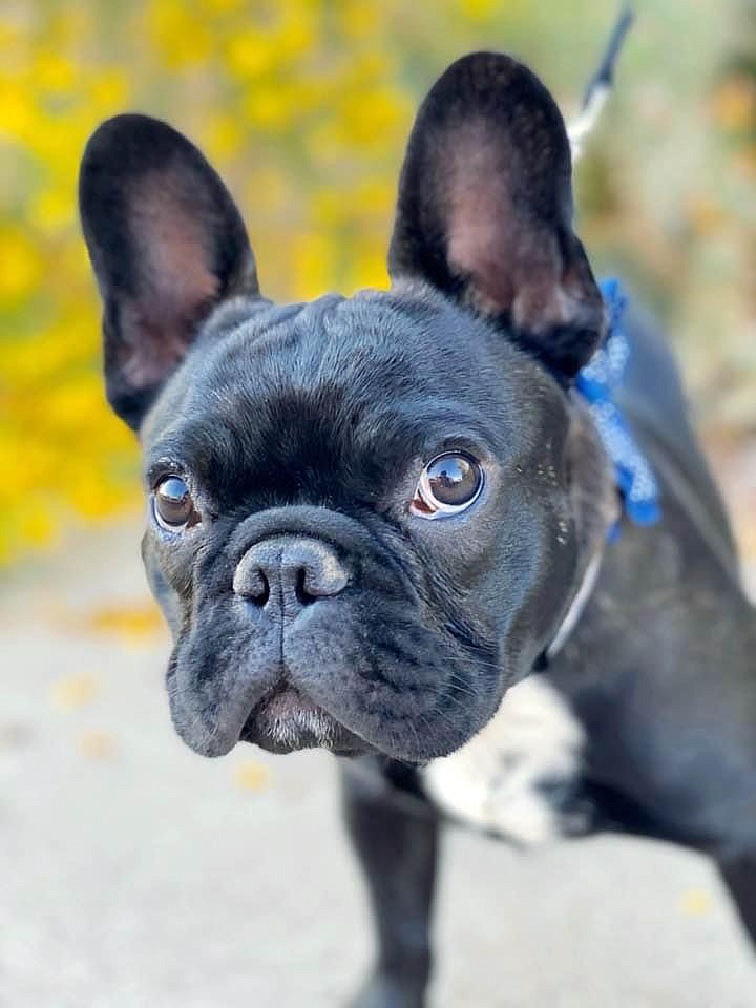 Bruce is named after Bruce Wayne from &quot;Batman.&quot; CREDIT: Courtesy of Michelle Fortin