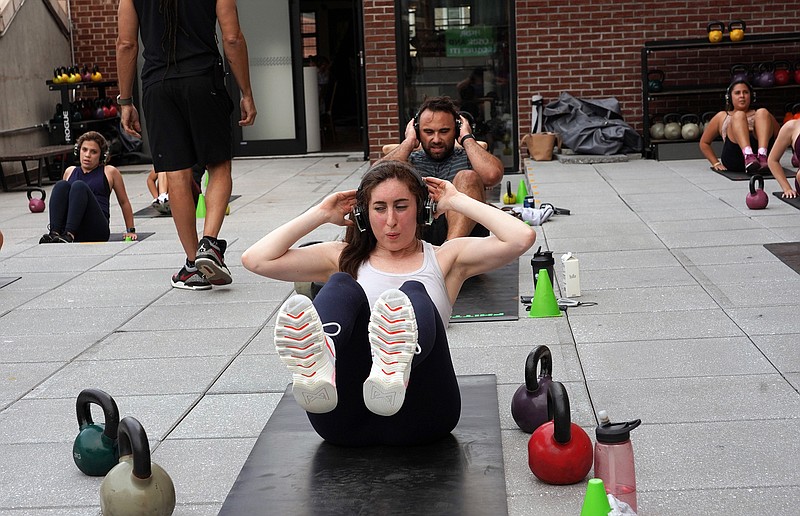 A rooftop exercise class in Manhattan, June 3, 2021. For the past five years or so, high-intensity interval training, or HIIT &#x460;brief spurts of intense exercise interspersed with rest &#x460;has been one of the most popular forms of exercise. But plenty of questions remain. (The New York Times/Michelle V. Agins)

For the past five years or so, high-intensity interval training, or HIIT, has been one of the most popular and controversial forms of exercise. Consisting of brief spurts of intense exercise interspersed with rest, various versions of HIIT have been tested, tried, talked about and sometimes derided by researchers, coaches, journalists, influencers and almost anyone else interested in fitness.

Gym franchises and online classes specialize in HIIT. Dozens of scientific studies every month explore its benefits and drawbacks. By almost any measure, HIIT is hot.

But plenty of questions remain about HIIT. Is it particularly good for our hearts? Minds? Life spans? Waistlines? Is it better for us, long term, than taking a brisk daily stroll? And what does "intense" exercise even mean?

With New Year's exercise resolutions almost around the corner, now seems the right moment to hone in on HIIT, and how and why to try it. It is also useful to explore the best way to do HIIT, as well as whether we need a pricey heart rate monitor, gym membership, personal trainer and advanced math skills to get started, or if sneakers, a handy hill and a distant tree can be equipment enough.

With HIIT, you strenuously ride, run, swim, hop, crunch or otherwise push yourself aerobically for a few minutes or even seconds, slow or stop to rest for a few more minutes, and repeat that sequence three or four times, or more. The aim is to "challenge" your cardiovascular system and muscles during each interval without tipping yourself into abject exhaustion or injury, said Martin Gibala, a professor at McMaster University in Hamilton, Ontario, and prominent HIIT researcher.

This exercise approach is not new, of course. Athletes looking for performance boosts have threaded interval sessions into their broader training since time immemorial. But today's HIIT is often promoted as the only exercise you have to do — and not an add-on to longer, moderate sessions.

"For most people, there is no doubt that HIIT leads to larger increases in VO2max" — or maximal oxygen uptake, a measure of aerobic fitness and endurance — "than exercise of a more moderate nature," said Ulrik Wisloff, a professor and head of the cardiac exercise research group at the Norwegian University of Science and Technology in Trondheim, who has been studying HIIT for more than 20 years.

A higher VO2max is strongly associated with greater longevity, he added, suggesting that intervals are likely to have a more potent influence on our life spans than, for instance, gentle walks.

HIIT also might help to reduce fat stores around our midsections as effectively as longer, easier exercise, and it seems uniquely beneficial for our brains.

"HIIT improves memory in younger and older adults" in ways that standard, moderate exercise cannot, said Jennifer Heisz, a professor at McMaster University and the author of the forthcoming book "Move the Body, Heal the Mind," which will be published in March. (See arkansasonline.com/1129move.) Only strenuous exercise prompts the muscles to produce a gush of the chemical lactate, she said, which then travels through the blood to the brain, where it is known to promote the creation of new cells and blood vessels, benefiting brain health and lowering risk for dementia.

Most beguiling, HIIT workouts can be exceptionally brief.

In a famous 2006 study from Gibala's lab (see arkansasonline.com/1129lab), for two weeks one group of college students pedaled stationary bicycles moderately for 90 to 120 minutes three times a week, while another group grunted through four to six sessions of 30 seconds of all-out cycling followed by four minutes of recovery.

The moderate exercisers, who topped out at about 12 hours of exercise altogether, showed improved measures of fitness and healthfully remodeled the inner workings of their muscle cells. But the HIIT riders, who completed 12 total minutes of intense exercise, grew just as fit or fitter and showed even more molecular alterations inside their muscles.

"It is neither practical nor advisable to be doing HIIT on a daily basis," said Jamie Burr, a professor at the University of Guelph in Ontario, who has studied the physiological effects of many types of physical activity. Health guidelines generally advise against this kind of exercise more than three times a week, he said, to avoid burnout or injury.

[Video not showing up above? Click here to watch » arkansasonline.com/1129pinky/]

But in that case, we are not exercising for at least four days of the week, which can be a problem.

So if you decide to do HIIT, plan to schedule other types of exercise, he said, such as moderate walking, cycling, swimming, jogging or calisthenics on most other days of the week.

Perhaps the biggest impediment to HIIT for many people is that name.

"I wish we would start using the more-encompassing term 'interval training,'" rather than HIIT, Gibala said. "So many people are intimidated, because they think HIIT has to be this all-out, hard-as-you-can-go, gut-busting workout."

It does not, he said. On a green-yellow-red spectrum of physical effort, he said, it is "yellow."

"You should be able to have short conversations with another person" during a typical interval, Wisloff said. "But if that person asks you to sing, you should not be able to."

In practice, this level of effort could mean walking up a hill instead of on level ground, Wisloff said. Interval walking, in fact, can be an ideal introduction to this kind of exercise.

In a large-scale experiment a few years ago in Japan, almost 700 middle-aged and older adults walked for 30 minutes, some at their usual pace, while others alternated three minutes of up-tempo walking with three minutes of strolling. At the end of five months, the interval walkers were considerably fitter and stronger than the others. And when the researchers checked back in with the volunteers two years later, 70% of the interval walkers were voluntarily continuing with their interval program.

Interested in trying HIIT now? Good, Wisloff said. "I would say that everyone should aim for at least one HIIT session per week, for the sake of health," he said.

Choose whichever variety of HIIT appeals to you. You might try one minute on, one minute off, meaning you push yourself for 60 seconds, rest for 60, and repeat, or the four-minute interval workouts employed often in Wisloff's research, with four minutes of strenuous effort followed by four minutes of rest.

Other researchers use four-second intervals, and I have tried and enjoyed the 10-20-30 approach, which was pioneered by scientists in Copenhagen, Denmark: You jog or otherwise exercise gently for 30 seconds, increase the effort for 20 seconds and then sprint for 10 seconds before returning to the easy half-minute jog.

But lately, I have settled into frequent fartleks.

The word "fartlek" became familiar to American runners in the 1980s and '90s. Swedish for speed play, fartlek workouts involve picking a goal, such as a tree or light pole up ahead, and speeding up until you reach it. No need to check your heart rate or track each interval's length in time or distance, said Wisloff, who also trains with fartlek.

Use the natural contours of the landscape to shape your exercise.

"This is perfect to do outside the gym," he said, and fartlek workouts cost little and require little experience to figure out.

Just dash toward the tree until it recedes behind you, pick another landmark ahead, and you'll be "HIITing" health and fitness goals.