Marshallese rift gives China an in, some fear 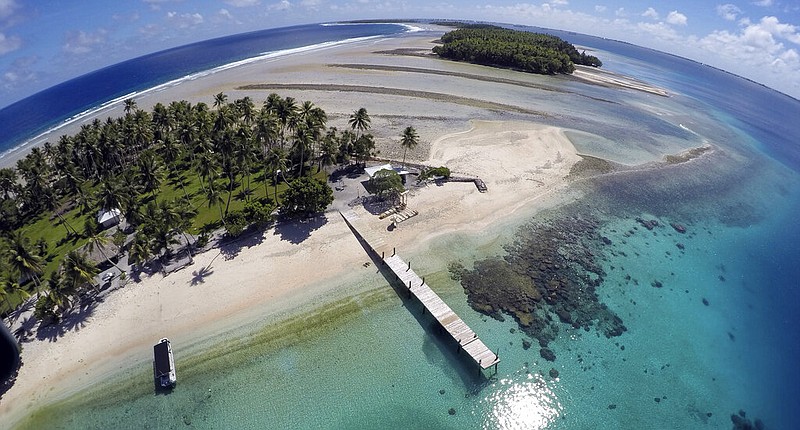 An aerial photo shows a small section of the atoll that has slipped beneath the water line, only showing a small pile of rocks at low tide, on Majuro Atoll in the Marshall Islands on Nov. 8, 2015. For decades, the tiny nation of the Marshall Islands has been a stalwart American ally. Its location in the middle of the Pacific Ocean has made it a key strategic outpost for the U.S. military. (AP/Rob Griffith)

WELLINGTON, New Zealand -- For decades, the tiny Republic of Marshall Islands has been a stalwart American ally. Its location in the middle of the Pacific Ocean has made it a key strategic outpost for the U.S. military.

But that loyalty is being tested amid a dispute with Washington over the terms of its "Compact of Free Association" agreement, which expires soon. The U.S. is refusing to engage the Marshallese on claims for environmental and health damage caused by dozens of nuclear tests it carried out in the 1940s and '50s, including a huge thermonuclear blast on Bikini Atoll.

The dispute has some U.S. lawmakers worried that China might be willing to step into the breach, adding to a bruising competition for geopolitical dominance between the two superpowers.

In turn, U.S. money and jobs have benefited the Marshall Islands' economy. And many Marshallese have taken advantage of their ability to live and work in the U.S., moving in the thousands to Arkansas, Hawaii and Oklahoma.

But this month, 10 Democratic and Republican members of the House of Representatives wrote to President Joe Biden's national security adviser, Jake Sullivan, about the U.S. compact talks with the Marshalls, Micronesia and Palau.

"It is distressing that these negotiations do not appear to be a priority -- there have been no formal meetings since this Administration began -- even as our international focus continues shifting to the Indo-Pacific," they wrote.

The lawmakers said the delays were putting the U.S. in a weaker position, and "China is all too ready to step in and provide the desperately needed infrastructure and climate resiliency investment that is sought by these long-time partners."

China's Foreign Ministry said the U.S. should face up to its responsibility to restore the environmental damage it caused with its nuclear tests. It said China was willing to engage with the Marshall Islands and other Pacific island nations on the basis of mutual respect and cooperation under the "One China Principle," in which Taiwan is viewed as part of China.

"We welcome efforts to boost economic relations and improve the quality of life between the sides," the ministry said in a statement.

China has steadily poached allies from Taiwan in the Pacific, including Kiribati and the Solomon Islands in 2019. Just this week, angry protesters in the Solomons set fire to buildings and looted stores in unrest that some have linked to the China switch.

James Matayoshi, the mayor of Rongelap Atoll on the Marshall Islands, said he and hundreds of others have remained displaced from their atoll since the nuclear tests and want to see it revitalized. He said officials have been talking with potential investors from Asia, after a previous proposal by a Chinese-Marshallese businessman fell through.

"It would be a business transaction. We don't advocate for war or any superpower influence," Matayoshi said. "But we want to be able to live in our backyard and enjoy life here."

Like many others on the Marshall Islands, Matayoshi believes a U.S. settlement of $150 million agreed to in the 1980s fell well short of addressing the nuclear legacy. He said his late mother was pregnant at the time of one massive nuclear blast and became exposed to radiation that was the equivalent of 25,000 X-rays before giving birth to a stillborn baby.

But the U.S. position has remained static for more than 20 years, the last time the compact came up for renegotiation. The U.S. maintains that nuclear compensation was dealt with in a "full and final settlement" and cannot be reopened.

Marshallese Senator David Paul -- who is on the islands' negotiating committee and also represents Kwajalein Atoll, which is home to a major U.S. military base -- said continuing high cancer rates and the displacement of people remain huge issues.

"Everyone knows the negotiations at that time were not fair or equitable," Paul said. "When you look at the total cost of property damage and the ongoing health issues to date, it's a drop in the bucket. It's an insult."

Various estimates put the true cost of the damage at about $3 billion, including for repairs to a massive nuclear waste facility known as the Cactus Dome which environmentalists say is leaking toxic waste into the ocean.

A 2020 report to Congress from the U.S. Department of Energy states the dome contains over 100,000 cubic yards of radioactively contaminated soil and debris but the structure wasn't in any immediate danger of failing. The report concluded that any contaminated groundwater flowing beneath the structure was not measurably affecting the environment.

As it did in earlier compact negotiations, the U.S. has stonewalled discussions on the nuclear legacy, something that American officials acknowledge.

"We know that's important, but there is a full and final settlement, and both sides agreed to it," said a senior U.S. official who wasn't authorized to publicly discuss the issue and spoke on condition of anonymity. "So, that issue is just not subject to being reopened. But, we're still quite willing to work with the [Marshallese] on the broader issues that are important to us and that's what we hope to do."

The U.S. State Department said the Indo-Pacific is central to U.S. foreign policy.

"We are prioritizing achieving success in the negotiations related to the Compacts with the Freely Associated States as a regional foreign policy objective," the department said.

The frustrations of the Marshallese were apparent in a letter sent last month by Foreign Minister Casten Nemra to Rep. Katie Porter, a California Democrat who chairs the House Natural Resources Committee's oversight and investigations panel.

"The State and Interior Department officials involved have been unwilling to discuss an agenda for the talks and tried to confine the discussion to their own limited proposals," Nemra wrote. "The nuclear issue clearly was one reason. All issues raised by the Marshall Islands were met with assertions that they did not have authority to discuss the matters without any indication that they would seek it."

"I believe the U.S. has the legal and moral obligation to make sure they clean up this debris," Paul said. "We want to make sure we get a better deal this time around. As they say, the third time is a charm." 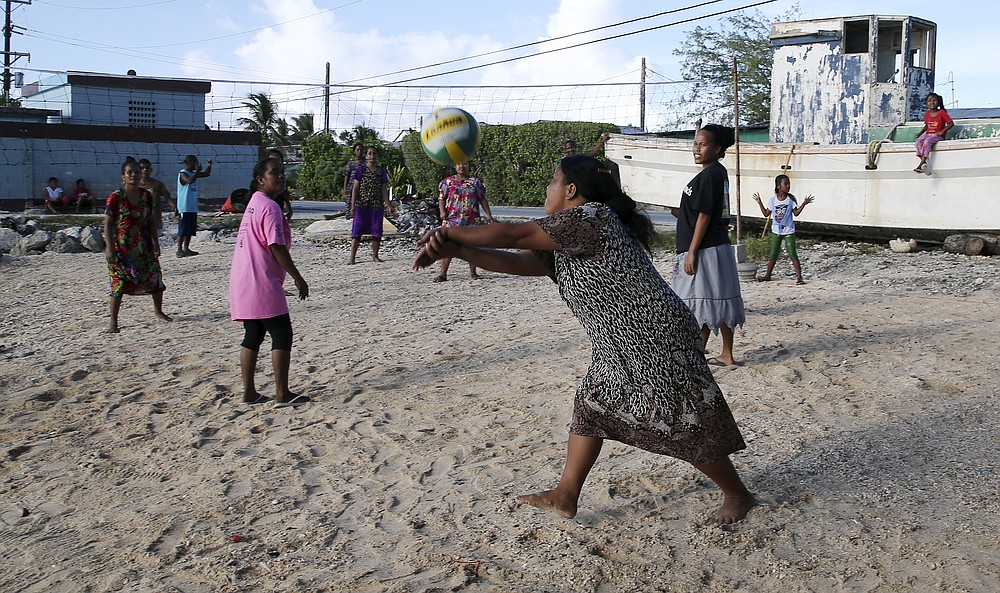 FILE - Mothers and children enjoy an afternoon game of volleyball on a beach in Majuro Atoll in the Marshall Islands on Nov. 9, 2015. For decades, the tiny Marshall Islands has been a stalwart American ally. Its location in the middle of the Pacific Ocean has made it a key strategic outpost for the U.S. military. (AP Photo/Rob Griffith, File)

Print Headline: Marshallese rift gives China an in, some fear