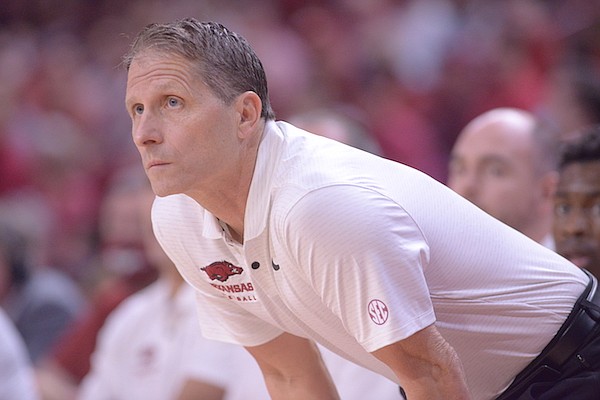 Razorbacks coach Eric Musselman looks toward the action during Arkansas’ win over Pennsylvania on Sunday, Nov. 28, 2021 at Bud Walton Arena in Fayetteville. The Razorbacks won 76-60.

FAYETTEVILLE -- As University of Arkansas men's basketball Coach Eric Musselman predicted Sunday night after the Razorbacks beat Penn 76-60, they're back in the top 10 of The Associated Press poll.

The Razorbacks (6-0) moved up three spots to No. 10 in the poll released Monday.

Arkansas, which opened the season at No. 16, also was ranked No. 10 in the final AP poll last season before the NCAA Tournament.

The Razorbacks lost three starters from last season's 25-7 team -- including NBA first-round draft pick Moses Moody -- which reached the Elite Elite. Now they're back in the top 10 with seven newcomers.

It's the highest ranking for Arkansas in November since it opened the 1994-95 season at No. 1 with all five starters returning from its national championship team.

"One of the phrases that I've talked to the team about, and will continue to, is it's all about backing up optimism with actual performance," Musselman said Monday. "That's a phrase that I think is really important to us.

"We understand there's been optimism since the offseason. How are we going to back it up? With how we produce.

"Any time you're ranked, there's also responsibility, there's a target and you've got to understand that."

Seven teams ranked in the AP preseason poll already have dropped out. Of the teams in this week's poll, 16 have at least one loss, including five in the top 10.

"When somebody beats a top-10 team, there's celebration," Musselman said. "So you've got to understand that feeling."

When Musselman was Nevada's coach, the Wolf Pack opened the 2018-19 season ranked No. 7 -- after making the NCAA Tournament Sweet 16 the previous season -- and stayed in the top 10 through the end of February, rising as high as No. 5.

"I know that the 17 weeks at Nevada when we were in the top 10, there's an added pressure that you play with," Musselman said. "I mean, I can't really describe it. We want to try to eliminate as much pressure as we can.

"We still want to be able to celebrate victories, but when you're top 10, top 5, sometimes you win a game and you're not celebrating."

Musselman wasn't in a good mood after the Razorbacks beat the Quakers by 16 points. He was upset about having 15 turnovers against Penn's zone defense and making 3 of 17 on three-pointers, stating he wished he could hold practice immediately after the game.

"So she basically told me I could bring that garbage attitude only after a loss. She put it in perspective and is right.

"We do have areas we have to get better at, but to be ranked in the top 10 is something that I think is a nice added incentive to get people to Bud Walton. It's a top-10 team."

The Razorbacks will be back at Walton Arena to play the University of Central Arkansas at 7 p.m. Wednesday.

"Come and get rowdy," Musselman said. "Get there early."

Penn Coach Steve Donahue said he was impressed by the Razorbacks.

"Having coached in the ACC, I know how difficult it is when you have a lot of new bodies to get everybody to play really hard, but I think that is their biggest attribute right now," said Donahue, who was Boston College's coach from 2010-14. "They have some pieces that are really nice.

"[Au'Diese] Toney is a great offensive rebounder and cutter. The kid [Jaylin] Williams is an elite passer and willing to do a little bit of everything. And then you have guys that can really score like [JD] Notae and [Chris] Lykes, and I think [Davonte] Davis will get it going.

"So there are a lot of things going for them, and the overriding thing is they compete at a high level and it is going to win them a lot of games."

Arkansas hasn't played a ranked team yet, but the Razorbacks are 2-0 against opponents who beat teams that were ranked.

The Razorbacks were expected to play No. 14 Illinois in the Hall of Fame Classic at Kansas City, Mo., but Cincinnati upset the Illini 71-51. Arkansas then beat the Bearcats 73-67 after beating Kansas State 72-64.

Before the Razorbacks went to Kansas City, they beat Northern Iowa 93-80. The Panthers then went to St. Bonaventure and beat the No. 16 Bonnies 90-80.

Musselman said he watched all of the Northern Iowa-St. Bonaventure game and praised Anthony Ruta, the Razorbacks' director of operations, for scheduling the Panthers.

"When Coach Ruta did the schedule, he said, 'You're not going to like this game when we play them, but if we beat them it's going to hold some weight' like [games against] Abilene Christian did and some of the other teams we played last year -- Oral Roberts and North Texas," Musselman said of opponents that won NCAA Tournament games in 2021. "St. Bonaventure is a heck of a team. Northern Iowa is going to win some big games."

Musselman said on Arkansas' postgame radio show Sunday night that the Razorbacks are a challenging team to coach.

"I think any time you have new players, it can become a challenge," Musselman said Monday. "I think that regardless of the sport, when you coach a team sport it's always about role definition, role acceptance, and then thriving in your role. All those things become really important.

"The players are the ones who make the Xs and Os come to life. We can lay out the plan, but it's up to the guys to execute it.

"We've got some strong personalities. We've got a group of guys that's going to continue to evolve and get to know each other, both on the floor and off the floor."