Decision Wednesday on Trump ally Clark who refused to answer questions by The Associated Press | November 30, 2021 at 2:00 a.m. 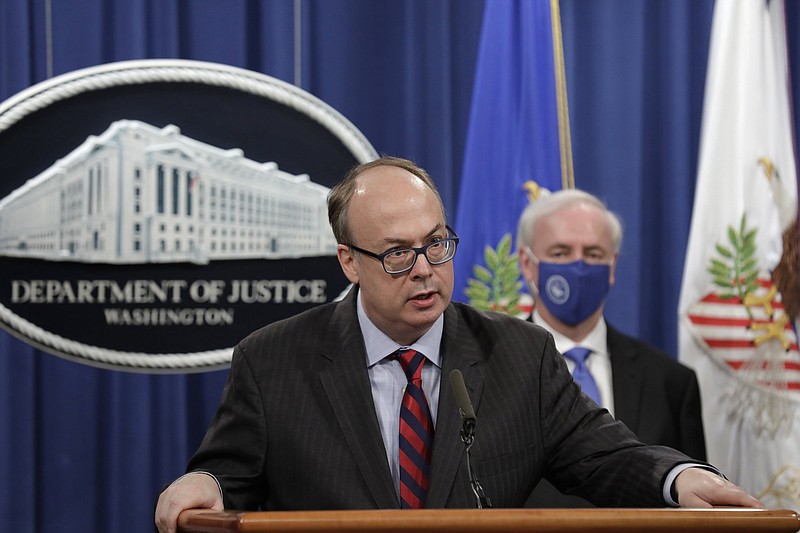 FILE - Acting Assistant U.S. Attorney General Jeffrey Clark speaks as he stands next to Deputy Attorney General Jeffrey A. Rosen during a news conference at the Justice Department in Washington, Oct. 21, 2020. Clark, who aligned himself with former President Donald Trump after he lost the 2020 election has declined to be fully interviewed by a House committee investigating the Jan. 6 Capitol insurrection, ending a deposition after around 90 minutes on Friday, Nov. 5. (Yuri Gripas/Pool via AP, File)

WASHINGTON -- The House committee investigating the Jan. 6 Capitol insurrection will vote Wednesday to hold a former Justice Department official in contempt, demanding criminal charges against a defiant witness for a second time as lawmakers seek answers about the violent attack.

Clark appeared for a deposition Nov. 5 but told lawmakers that he would not answer questions based partly on Trump's legal efforts to block the committee's investigation.

The vote will come as the panel is also considering contempt charges against former White House Chief of Staff Mark Meadows, who was Trump's top aide the day that hundreds of his supporters attacked the U.S. Capitol and interrupted the certification of President Joe Biden's victory. Meadows was subpoenaed in September but has not yet sat for an interview with the committee.

The panel has vowed to aggressively seek charges against any witness who doesn't comply as members investigate the worst attack on the Capitol in two centuries, and the Justice Department has signaled it is willing to pursue those charges, indicting longtime Trump ally Steve Bannon earlier this month on two federal counts of criminal contempt.

Attorney General Merrick Garland said then that Bannon's indictment reflects the department's "steadfast commitment" to the rule of law after Bannon defied the committee and refused to cooperate.

Clark's case could be more complicated since he did appear for his deposition and, unlike Bannon, was a Trump administration official on Jan. 6. Trump has sued to block the committee's work and has attempted to assert executive privilege over documents and interviews, arguing that his conversations and actions at the time should be shielded from public view.

A report issued by Democrats on the Senate Judiciary Committee detailed how Clark championed Trump's efforts to undo the election results and clashed with Justice Department superiors who resisted the pressure, culminating in a dramatic White House meeting at which Trump ruminated about elevating Clark to attorney general. He did not do so after several aides threatened to resign.

In a somewhat similar case, the Justice Department in 2015 declined to prosecute former IRS official Lois Lerner on contempt of Congress charges after she delivered an opening statement at a hearing but then repeatedly refused to answer questions from lawmakers, citing her Fifth Amendment right to not incriminate herself.

This time, though, the Justice Department is considering the charges against a former administration official, not a current official. With little precedent to go on, it's unclear what the department would do.

Clark is one of more than 40 people the committee has subpoenaed so far. The panel's chairman, Rep. Bennie Thompson, D-Miss., wrote in Clark's subpoena that the committee's probe "has revealed credible evidence that you attempted to involve the Department of Justice in efforts to interrupt the peaceful transfer of power," efforts that "risked involving the Department of Justice in actions that lacked evidentiary foundation and threatened to subvert the rule of law."

After Clark refused to answer questions, Thompson said it was "astounding that someone who so recently held a position of public trust to uphold the Constitution would now hide behind vague claims of privilege by a former President, refuse to answer questions about an attack on our democracy, and continue an assault on the rule of law."

Lawmakers on the committee have said they will decide as soon as this week whether to hold Meadows in contempt as well. Thompson said earlier this month that the committee "won't rush the effort" to make it clear it has given the former North Carolina congressman multiple opportunities to cooperate.

Meadows' lawyer has repeatedly made clear that he won't comply with the September subpoena, arguing that Trump has said he will assert executive privilege over the testimony. The committee has rejected those arguments, especially as the White House has said that Biden would waive any privilege over Meadows' interview and as courts have so far shot down Trump's efforts to stop the committee from gathering information.

The House panel has argued that it has questions for Meadows and Clark, as they did with Bannon, that do not directly involve conversations with Trump and couldn't possibly be blocked by privilege claims.

Information for this article was contributed by Eric Tucker and Michael Balsamo of The Associated Press.