8 bills on shot mandates go back to state panel 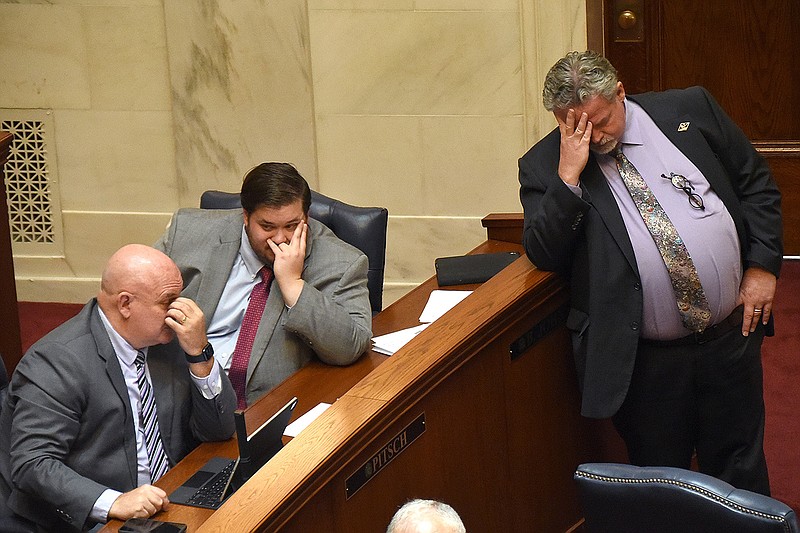 Republican Sens. Mathew Pitsch of Fort Smith, (from left) Ben Gilmore of Crossett and Alan Clark of Lonsdale listen to questions about a new motion Thursday at the state Capitol. (Arkansas Democrat-Gazette/Staci Vandagriff)

The deeply divided Arkansas Senate on Thursday voted to send eight bills that would restrict employer-mandated covid-19 vaccinations back to committee for vetting.

The Senate’s 19-14 vote to return the coronavirus-related bills to the Senate Public Health, Welfare and Labor Committee came a day after the panel advanced the bills to the full Senate without having the usual discussion or public testimony.

Last month, President Joe Biden’s administration issued a mandate applying to businesses with more than 100 employees that will require workers to be vaccinated or submit to weekly testing. The Arkansas bills are in response to that mandate.

Lt. Gov. Tim Griffin on Thursday ruled that the Senate could consider one of the bills, Senate Bill 732 by Sen. Blake Johnson, R-Corning.

That’s because the Republican lieutenant governor said he interprets the House-and Senate-approved House Concurrent Resolution 15 by Hickey and Shepherd as allowing lawmakers to consider covid-19-related legislation, as well as legislation distributing covid-19 relief funds in this week’s extended regular session and based on his review of state Supreme Court rulings.

Griffin’s ruling came despite Hickey’s contention that the language in the resolution was only aimed at allowing legislation distributing covid-relief funds in the extended regular session — not stand-alone covid-related legislation — in addition to congressional redistricting legislation.

In a 15-18 vote, Hendren’s challenge of Griffin’s ruling fell three votes short of the 18 required in the 35-member Senate.

SB732 by Johnson would prohibit businesses, a person or any other legal or commercial entity from coercing another person to receive a vaccine or immunization for covid-19 under certain conditions.

But Sen. Keith Ingram, D-West Memphis — who serves on the Arkansas American Rescue Plan steering committee appointed by Gov. Asa Hutchinson — told senators that’s not an approved use of the federal funds. He said later that the state Department of Finance and Administration’s consultant on the use of federal American Rescue Plan funds made a similar conclusion.

At one point, Johnson acknowledged, “I didn’t know that there were guidelines set.” Sen. Ron Caldwell, R-Wynne said steering committee chairman Larry Walther, who is secretary of the finance department, confirmed that the state’s federal American Rescue Plan funds could not be used in the manner that Johnson’s bill requires them to be used. Caldwell also serves on the steering committee.

At that point, Sen. Jonathan Dismang, R-Searcy, said he’s not proud that the Senate Public Health, Welfare and Labor Committee provided the public with only 30 minutes notice of its meeting Wednesday and then sent controversial bills to the full Senate without vetting the measures.

“What we are doing is not right.” Then, Sen. Missy Irvin, R-Mountain View, the former Public Health committee chairman, made a motion for the Senate to send all eight bills back to the committee.

Committee chairwoman Cecile Bledsoe, R-Rogers, said she expedited the committee’s consideration of the eight bills Wednesday to the Senate floor because she thought lawmakers were trying to get out of the extended regular session to redraw congressional district boundaries within three days and the senators could debate the bills on the Senate floor Thursday.

But she said she was “fine” with sending the bills back to committee.

In a 14-18 vote, the Senate rejected a motion by Garner to send seven bills back to committee and allow Senate Bill 731 by Sen. Bob Ballinger, R-Ozark, to remain on the Senate floor.

SB731 would establish a right of privacy regarding vaccination status, prohibiting employers from requiring the disclosure of an individual’s vaccination status and from retaliating against an individual for exercising that right to privacy. The bill includes language that would allow the Department of Finance and Administration to establish a grant program with distribution of covid-19 relief funds or funds received under the federal American Rescue Plan to provide restitution to individuals injured by a violation of the measure.

The Senate then voted 19-14 to approve Irvin’s motion to send all eight bills back to committee. The committee is to meet at 8:30 a.m. today.

Afterward, Finance and Administration spokesman Scott Hardin said the finance department tracks all legislation, and any bill that includes the use of American Rescue Plan Funding is automatically provided to a consultant, Center for Toxicology and Environmental Health/Hagerty Consulting.

The state has relied on the expertise of these companies throughout 2020 for federal Coronavirus, Aid, Relief, and Economic Security Act funding, and that continues today regarding the federal American Rescue Plan funds, Hardin said.

John Grathwol of Hagerty Consulting wrote Thursday in an email to a finance department deputy director, Paul Louthian, “Despite the language of [SB732], the payment of American Rescue Pan funding to employees who suffer economic losses due to failure to either: a.) comply with a request by an employer to take a COVID-19 vaccine or b.) to engage in weekly testing, both employer programs designed to protect their work force and ensure an uninterrupted continuity of business operations, is not an eligible use of American Rescue Plan Act funding.” The American Rescue Plan Act covers the cost of responding directly to the covid-19 public health emergency, he said.

But Grathwol said there is no language in the American Rescue Plan Act that identifies the economic losses suffered by employees who lose their jobs by not getting vaccinated as an eligible expenditure of the federal funding.

“One may argue that the economic losses suffered by an employee who fails to comply with employer job requirements is an economic impact of the COVID-19 public health emergency,” he wrote in his email to Louthian.

“However, this economic impact is not felt by all employees in a company or an industry,” Grathwol said. “It is clearly the result of an employee’s personal decision to fail to comply with employer job requirements. I think the overall legislative intent of the [federal act] is clear — provide funding to fight the COVID-19 pandemic and address the economic harm caused by the economic slowdown. The legislation makes no provision for funding economic losses of individuals who chose not to comply with employer mandates.

“This however does not mean that certain parties may not attempt to litigate these questions,” he said.

Johnson said Thursday night that he plans to try to amend his bill today, and he plans to ask the Senate committee to approve an amended bill.

On the other side of the state Capitol on Thursday, the House of Representatives did not take action on House Bill 1972 by Rep. Joshua Bryant, R-Rogers, a day after the bill cleared the House Public Health, Welfare and Labor Committee. Bryant said he planned to amend the legislation.

HB1972 would exempt employees from federal or employer coronavirus vaccination mandates and authorize unemployment benefits for employees who are fired for refusing to get vaccinated. It’s similar to Senate Bill 739 by Sen. Kim Hammer, R-Benton, which has Bryant as a co-sponsor. 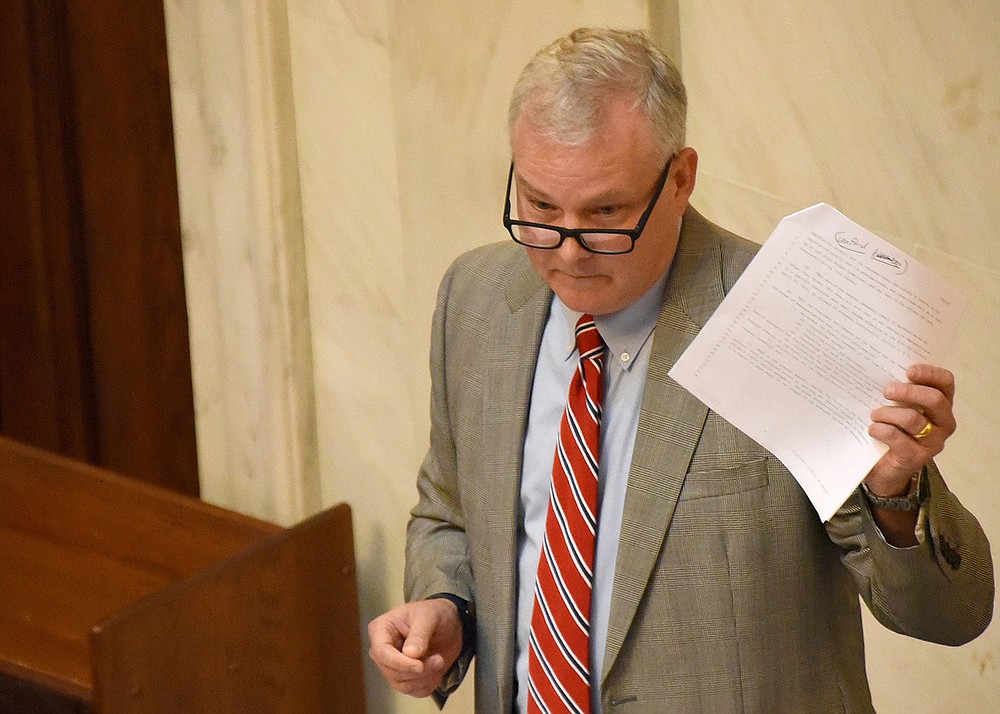