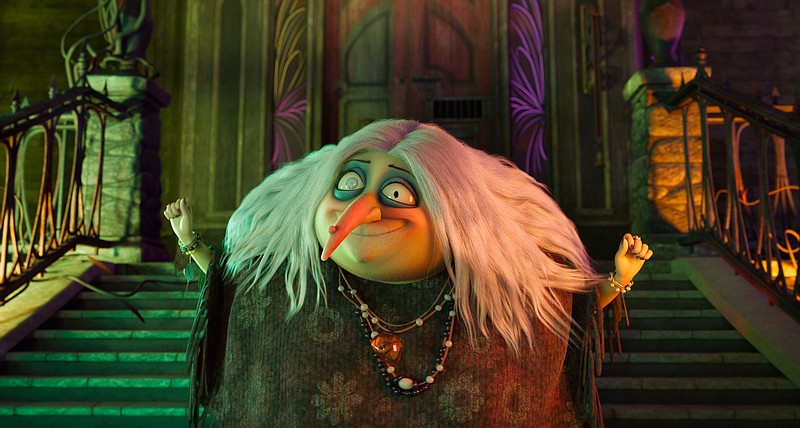 Grandmama (voiced by Bette Midler) is the mother of Gomez and Fester Addams in the current computer-animated iteration of “The Addams Family 2,” which is based on New Yorker cartoons by Charles Addams that began running in 1938.

With an iconic theme song (snap, snap), television series, cartoons, movies, comics and more, "The Addams Family" is a well established property. Unfortunately, the latest outing has no established reason for existing.

Animation has given the world some beautiful stories like "The Lion King," "Wolfwalkers," "Spirited Away," and so much more. But it's also full of quick cash grabs, where a mediocre film makes just enough money that studio executives decide to churn out a pointless sequel in hopes of repeating that financial success.

In 2019, "The Addams Family" was released to mixed reviews. The animation and vocal cast were fine, but the film wasn't anything to write home about. Just two years later, "The Addams Family 2" is here, and it feels like a writers room threw sketches at the wall to see what would stick and then tied it all together under a very loose narrative of the done to death family road trip.

"The Addams Family 2" opens with Wednesday (Chloe Grace Moretz) participating in a macabre science fair experiment transferring the intelligence from an octopus that can solve Rubik's Cubes to mindless Uncle Fester (Nick Kroll). The experiment is a success, but Wednesday doesn't win the science fair. Everyone does, thanks to participation trophies that anger the tortured genius.

It's not a bad opening, and Moretz once again shines as just about the only good part of these movies. Wednesday is the only entertaining character to watch, and her wit and tone cut right to the bone, exactly as the character should. She has great lines like, "Look, Lurch. Loud people who use fast rides to distract themselves from childhood trauma."

The chaos and energy of the mad science fair seem to match the traditional vibe of the '90s animated series. And visually, the characters translate well to a more modern 3D CG look that's prevalent in today's animated movies.

Once the science fair concludes, however, "The Addams Family 2" throws forth a random storyline about Wednesday not fitting in with her family. To "correct" this, Gomez Addams (Oscar Isaac), the family patriarch, suggests they go on a road trip. And the movie devolves from there.

What follows is a series of random sketches involving the Addamses visiting Niagara Falls, entering Wednesday in a cowgirl beauty pageant against her will, visiting (and then blowing up) the Grand Canyon, participating in a disco roadhouse song and dance number and culminating in a kaiju fight between an octopus-mutated Fester and a mad scientist made of different farm animals.

Very little of the film matches the decades of "Addams Family" tone set by previous TV series and movies. Proving the franchise has stood the test of time, millennials and Gen Z'ers seem to have an affinity for the Addamses.

But fans of the franchise all commonly expect charming and delightfully dark characters getting involved in twisted and macabre antics that parody the "ideal" 20th-century American family.

Whereas the 2019 reboot at least made an attempt at providing some of those things, "The Addams Family 2" seems less interested in giving franchise fans what they love and more interested in placing these established characters in a modernized world plagued by exhausted tropes.

Chasing the Addams Family on their vacation is a lawyer (Wallace Shawn) claiming Wednesday Addams was switched with another baby at the hospital just after birth, and that she's not actually part of the family. This, too, is nothing more than a tired trope, along with Fester pretending to be a shark and driving everyone out of the water in Miami and a mad scientist revealed at the end to be nothing more than a greedy cut and paste villain who wants Wednesday's science so he can get rich.

It's clear this screenplay (which somehow took four people to write) was just slapped together to repeat the financial success of the 2019 reboot, which brought in more than $200 million against a $24 million budget.

Put "The Addams Family 2" in the same box as those dozens of Disney direct-to-DVD sequels or the "Hotel Transylvania" franchise that keeps spawning more movies.

Perhaps the film's biggest sin is it found a great ensemble cast that fit these characters and gave the family a fitting, updated art style, then wasted it all by giving these beloved icons nothing to do.

What's the point of giving Lurch extended musical numbers or pitting the Addamses against a "Megamind" mad scientist rip-off? The movie doesn't even feel like it's trying half the time, giving one background teenager this exact line, "OMG, I should totes take a selfie of this moment." It's a wonder the next scene didn't involve kids drinking their Ovaltine.

Younger kids today might be fine watching this drivel, but if parents really care about properly introducing their children to "The Addams Family," they'll skip this latest film and instead pop in a DVD of the '90s films, reruns of the 1964-66 series, the animated series or even an anthology of the debut comic from the '30s. Even the Scooby-Doo episode where they meet the Addamses would be better to watch.

"The Addams Family 2" opens in theaters and online for rent today.

Rating: PG, for macabre and rude humor, violence and language