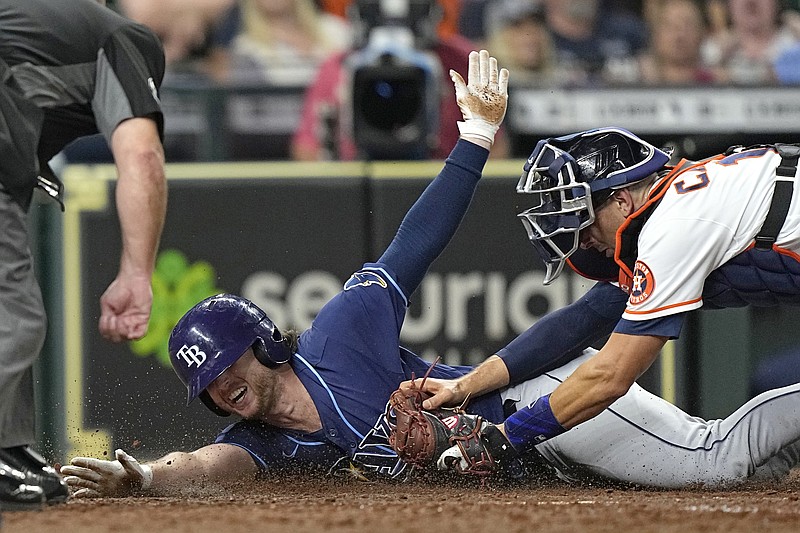 Tampa Bay Rays' Brett Phillips, left, is tagged out at home plate by Houston Astros catcher Jason Castro while trying to stretch a triple into a home run during the eighth inning of a baseball game Wednesday, Sept. 29, 2021, in Houston. (AP Photo/David J. Phillip)

There have been plenty of hair-brained ideas down through the years.

New Coke. Hair in a Can. The Godfather Part III. Auto-Tune. The Ford Pinto.

Well, it's time to add another one to the Hall of Shame:

The Tampa Bay Rays' nonsensical scheme to play half their home games in one city, the other half in another city some 1,500 miles away.

In two different countries, for that matter.

Strangely, a franchise that does pretty much everything right on the field -- the low-budget team made it to the World Series last season and is heading back to the playoffs with the best record in the American League -- keeps messing things up away from the diamond.

Plagued by dismal attendance despite their success, the Rays have been trying for years to come up with a replacement for Tropicana Field, a monstrosity of a domed stadium located in sleepy St. Petersburg, far away from much of their potential fan base.

Having been stopped at every turn, the Rays came up with a plan that you'd swear was a joke if they didn't say it with a straight face.

Taking a page from the old Kansas City-Omaha Kings -- look it up, kids -- the Rays are pushing to play spring training and roughly the first half of the season in Tampa, then shift north to Montreal to play the rest of their home games.

Oh, Canada, what are they thinking?

"Having two homes, people with families, people with kids in school, I think that's quite a bit to ask," Freeman said. "There's no other way to put it. That would be a lot."

"The season is hard enough as it is," he said. "If that's what the Rays think is the best for them, then that's great, but it's certainly something that is not ideal."

Let's see if we can grasp what the Rays are supposedly hoping to do by the time their Tropicana Field lease runs out in 2027, if not sooner.

Clearly, this boondoggle hinges on the Rays somehow persuading both cities to build new open-air stadiums, which they presume will be more viable economically since neither locale has shown much interest in subsidizing a domed or retractable-roof facility that would be optimal for a full season in either spot.

The Rays would hold spring training on the Gulf Coast and the first part of the season in Tampa. Then, just as the stifling Florida heat is really setting in and Montreal has finally thawed out from winter, the Rays would shift north to play the remainder of the regular season, hopefully completing their home schedule before the thermometer plunges again.

Of course, if the Rays made the playoffs, they would either have to play outdoors in Montreal in October -- not ideal, to say the least -- or shift back to Tampa -- better weather, but a jarring change heading into the postseason.

And what to call such a team?

The Rays nickname does not work in Montreal, which is eager to bring back the beloved Expos moniker from its previous big league team. Maybe they could borrow a a page the NFL in its fledgling days.

Struggling to stay afloat during World War II, the Philadelphia Eagles and Pittsburgh Steelers merged for the 1943 season, played home games in both cities, and became known as the "Steagles."

Anyone up for the Exrays?

There have been attempts to play in multiple home cities, though nothing on the scale that Tampa Bay is proposing.

Most notable were the Kansas City-Omaha Kings, who considered both cities home during their first three seasons in the NBA. Admittedly, they are much closer to each other than Tampa Bay and Montreal -- about 185 miles -- which made it more feasible to play 26 home games in Kansas City and 15 in Omaha.

Even then, the unique arrangement didn't last. The Kings dropped Omaha from their name after three seasons, eventually shifted all home games to Kansas City and wound up moving to Sacramento in 1985.

Clearly, two-city teams do not work long term. But the Rays keep insisting that it's the only way for baseball to survive in the Tampa Bay area -- even if it's only for a half-season a year.

The Rays were going to put up a sign at Tropicana Field touting the Sister City plan during the playoffs, only to change course when they were rightfully called out for angering what few fans they have and causing an unnecessary distraction for their players.

"I made a big mistake, a real mistake," Rays owner Stuart Sternberg said this week in an interview with the team's radio network. "I absolutely should have known better. "

Now, he needs to take an even bigger step. Call the sister-city plan what it is. 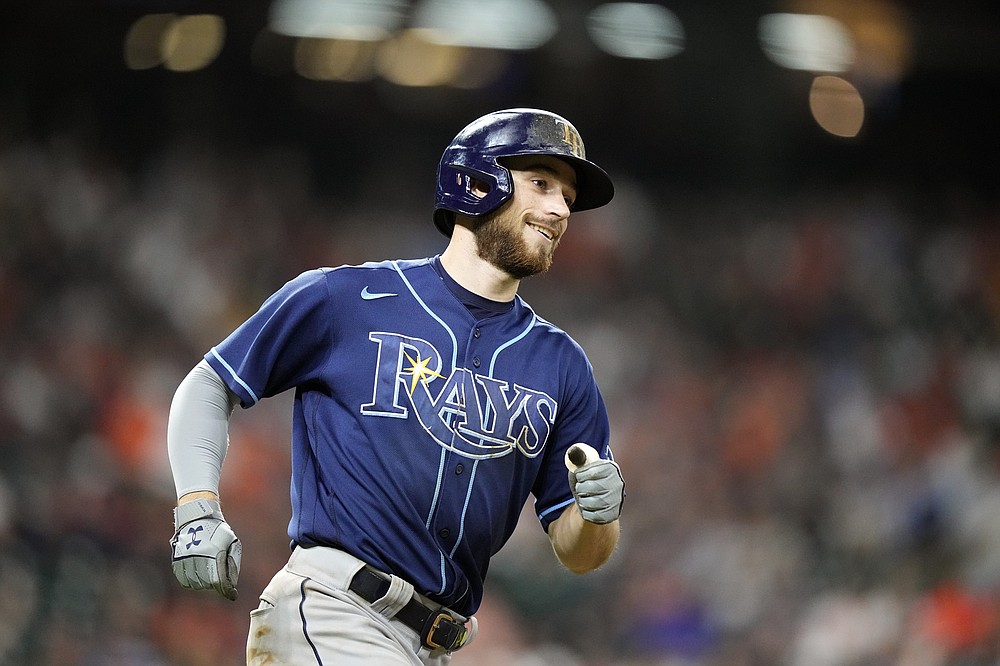 Tampa Bay Rays' Brandon Lowe smiles as he runs the bases after hitting a two-run home run against the Houston Astros during the sixth inning of a baseball game Thursday, Sept. 30, 2021, in Houston. (AP Photo/David J. Phillip) 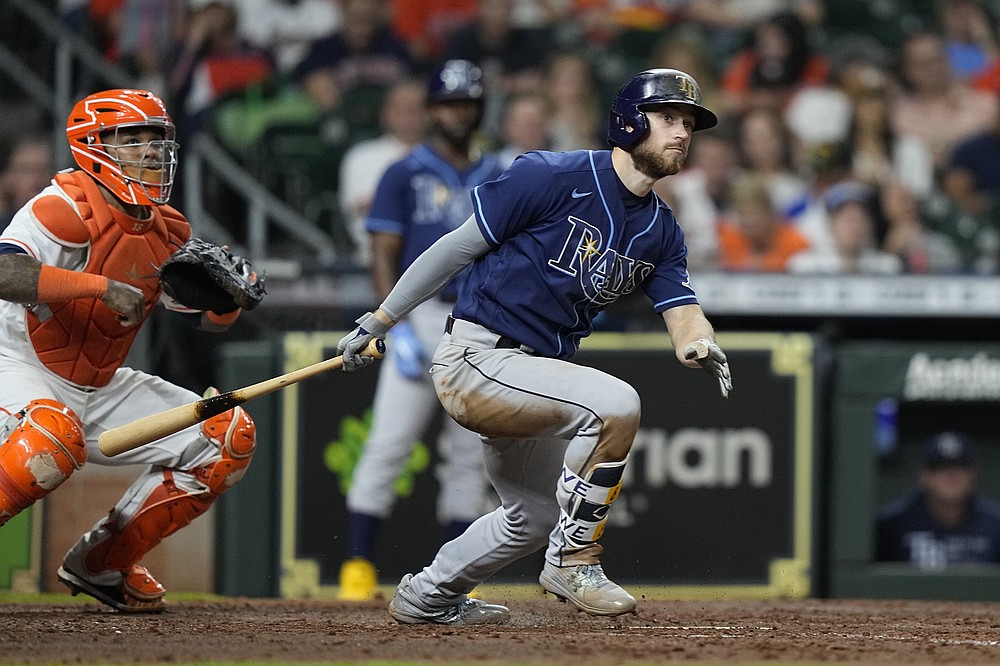 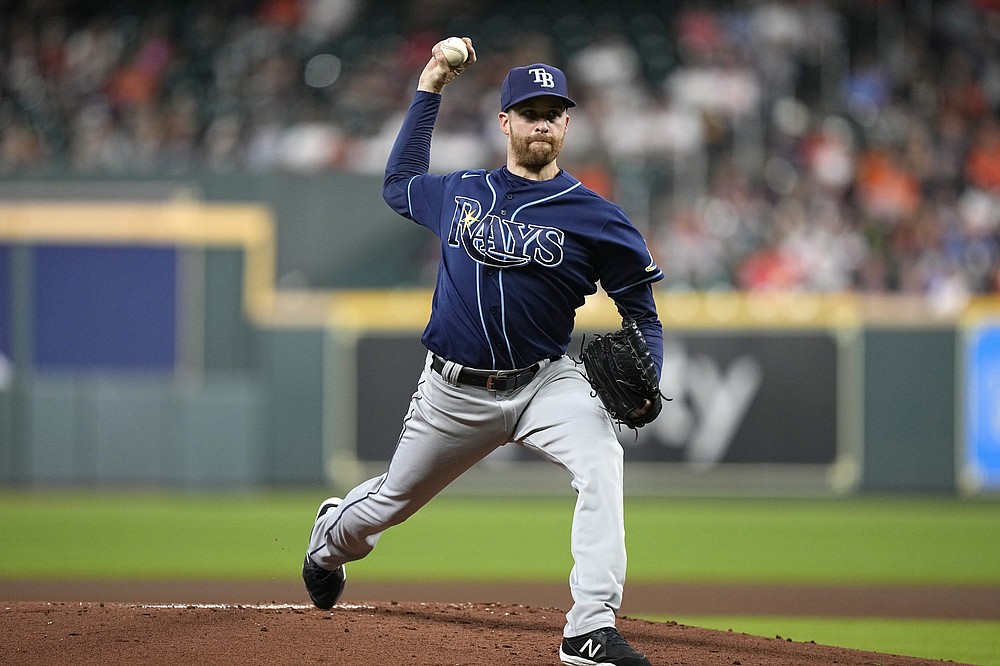