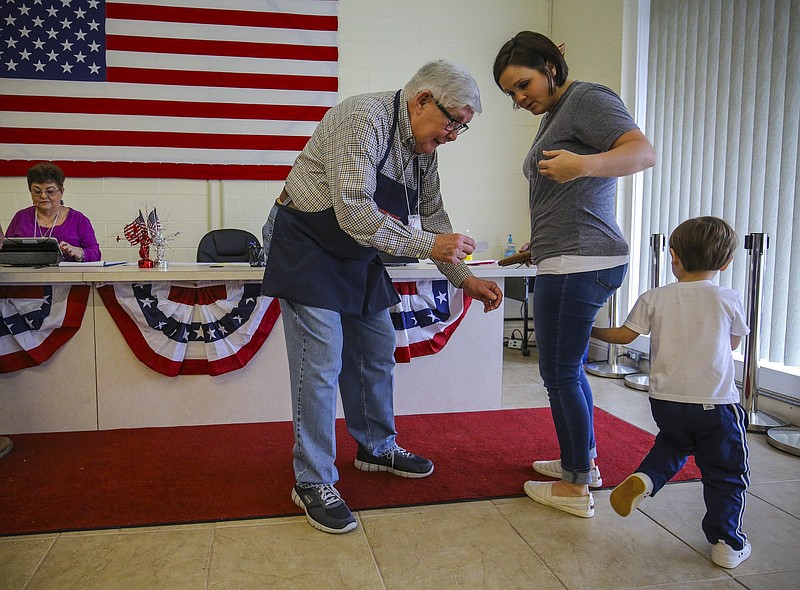 Election official Larry Rountree (left) moves in with an "I voted" sticker but Lawson Verde, 3, retreats behind his mother Stephanie Lawson as she prepares to early vote in a Bryant School special election in this March 2017 file photo. (Arkansas Democrat-Gazette/Stephen B. Thornton)

The small town turned growing suburb has changed much over the past few decades, but despite that fact its City Council wards will likely remain almost unchanged with the latest release of census data.

A meeting to discuss the new proposed map for the city's wards took about eight minutes Tuesday with City Council member Rob Roedel quipping "we're still going to beat the state with our approval."

"There's definitely no gerrymandering going on with these maps," he said.

The city tasked Metroplan to draw the new map, which likely will be unchanged when the City Council votes for its approval Oct. 26, Mayor Allen E. Scott said.

A small stretch of Ward 2, on the city's north side will be given to Wards 1 and 4, respectively. A section of Ward 4, south of Interstate 30 and along Arkansas 183, will be moved to Ward 3.

Sometimes when local governments task Metroplan with drawing boundary maps for schools or city council districts they give the inter-government agency instructions such as to make sure elected officials' homes remain in their districts.

But unlike the state Legislature, where political considerations are given primacy when redistricting, officials from Metroplan say their maps are "non-partisan."

"When we draw new ward boundaries we want them to be compact, we want them to be logical, and we want to keep like communities together," said Jeff Runder, a senior planner at Metroplan who helped design Bryant's map. "Those are our primary considerations. We are not faction politics in any way shape or form."

"We decided to kind of do a minimal change kind of map," Runder said.

Despite the small changes in its City Council map, Bryant has seen major changes. No longer a rural home for bauxite miners, Bryant is now a destination for families and Little Rock commuters.

There has been steady growth for Bryant over the decades after a population decline in the years after the nearby bauxite mine closed. The city then rebounded as a bedroom community for commuters, who found improved schools and more affordable housing than in Little Rock but were still close enough to enjoy the benefits of the capital city.

Much of the growth in Bryant has been concentrated on the city's north side, where many single-family homes are being built and where many commuters are moving.

"Basically the only place we have really to grow is north," Scott said, referring to the city's boundaries with nearby Benton, Alexander and Bauxite.

While cities like Bryant, Benton and Alexander have long been bedroom communities for Little Rock commuters, with the growth in population comes growth in the local industry, according to Jonathan Lupton, a senior planner for publications for Metroplan.

Some of Bryant and Saline County's growth can be attributed to more service-sector jobs in retail, schools and health care -- positions often filled by racial minorities, Lupton said.

"Bryant and the whole southwest axis [to Pulaski County] are kind of standing out," Lupton said of the increases in the Black population in places such as Bryant and Shannon Hills.

When it comes to Bryant's proposed ward map, the racial makeup is mostly evenly divided with whites taking up the majority in each ward. Runder said Metroplan did not take racial demographics into account when designing its map, although it would if a city requested it.

"That whole southwest axis has become somewhat more -- quite a bit more -- ethnically diverse," Lupton said. "I would say it has become so at a faster rate than anywhere in the metro area."