Library staff under fire over books on sex, LGBTQ issues 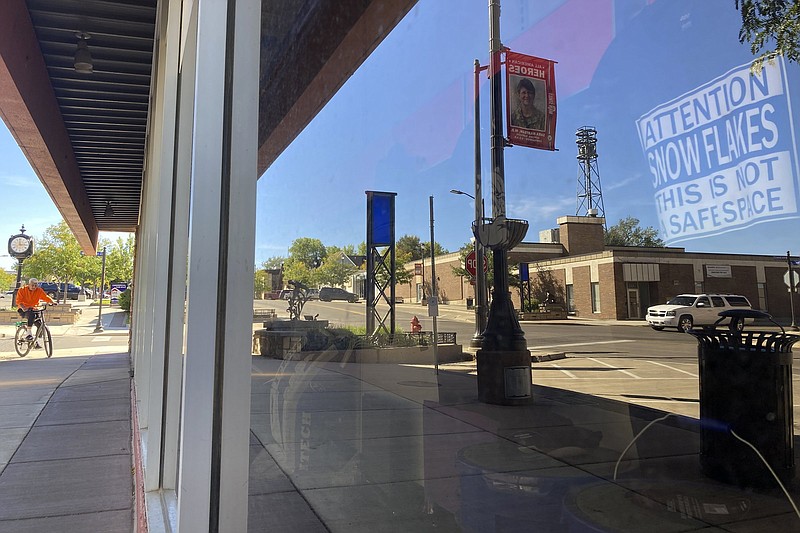 A shirt makes a political statement in a storefront in Gillette, Wyo. on Tuesday, Sept. 21, 2021. Prosecutors said they were considering possible criminal charges against Campbell County Public Library officials after some locals complained to police that books about sex and how to have a baby were in the children's and teenage sections. (AP Photo/Mead Gruver)

CHEYENNE, Wyo. -- Books about sex, LGBTQ issues and how to have a baby have public library employees in a deeply conservative Wyoming city facing possible prosecution after angry residents complained to police that the material is obscene and doesn't belong in sections for children and teenagers.

For weeks, Campbell County Public Library officials have been facing a local outcry over the books and for scheduling a transgender magician to perform for youngsters, an act canceled amid threats against the magician and library staff.

The books are "This Book is Gay" by Juno Dawson, "How Do You Make a Baby" by Anna Fiske, "Doing It" by Hannah Witton, "Sex is a Funny Word" by Corey Silverberg, and "Dating and Sex: A Guide for the 21st Century Teen Boy" by Andrew P. Smiler, according to Susan Sisti, a local pastor who has been raising concerns about those and other books in the library.

"It's really easy to go into the library and look around a little bit and find a filthy book that should not even be in a public library," said Sisti, pastor of Open Door Church in Gillette. "These books are absolutely appalling."

Now, after a complaint filed with the sheriff's office, prosecutors are reviewing the case. They will seek appointment of a special prosecutor to weigh in as well before deciding whether to pursue charges, County Attorney Mitchell Damsky announced Friday.

In all, the library has been working through 35 recent complaints about 18 books, she said, a situation she said appeared to be quite unusual for a public library.

"It's unexpected," Lesley said. "We are trying to be the force of reason, trying to work through these things using the policy we have in place -- review these books and do our due diligence."

The LGBTQ advocacy group Wyoming Equality said it's up to parents to decide when their children should have access to such books.

"Maybe the answer is never. If it's never, that's fine. But do you get to make that choice for other families?" said the group's executive director, Sara Burlingame.

The book dispute has "gotten contentious and out of hand" when it may have been resolvable by putting the books among material for adults, said Damsky, the prosecutor.

"Personally, as a parent, I find the material to be just inappropriate for children and disgusting. But as a lawyer I'm sworn to uphold the Constitution and that's why we are dealing with it with a fine-toothed comb," Damsky said.

The furor over the magician and the books prompted Wyoming Equality to talk with local officials about the threats and offer support to library staff. Local leaders had left Burlingame hopeful the rancor over the library would tone down, she said.

"It seemed like there was some kind of opportunity to put the brakes on this and can we talk to each other," Burlingame said. "It seems like the train has jumped the tracks."