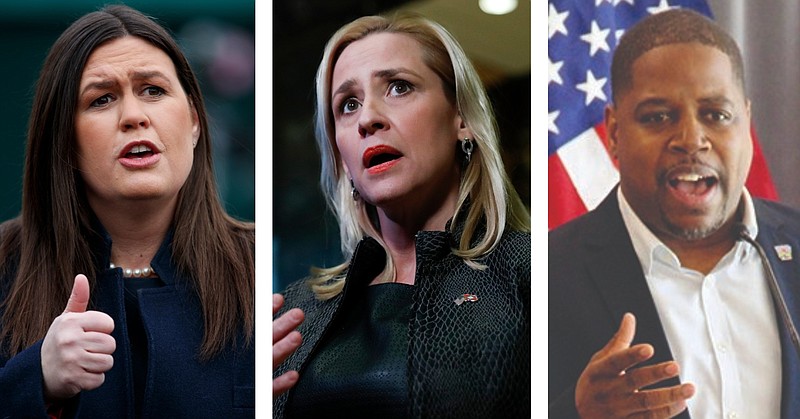 No one running for state office in Arkansas has ever assembled a mountain of campaign contributions as tall, wide and geographically diverse as Sarah Huckabee Sanders.

Her total so far, at $9.1 million, is $7.7 million more than her closest fundraising rival in the race for Arkansas governor, Attorney General and fellow Republican Leslie Rutledge.

Sanders has $3 million more than Gov. Asa Hutchinson collected for his entire 2018 campaign. And she has plenty of time to rack up more. The 2022 governor's race has 13 months to go.

Along with its size, Sanders' campaign stash also is unusual in Arkansas state politics because of its donors, specifically its donors' addresses.

About $3 of every $5 she's collected came from people who live outside the state -- in many cases, far outside.

Jeff Alling, a general contractor, sent $200 earlier this year to the Sanders campaign from his town of North Pole, Alaska. Just south of Fairbanks, North Pole is 3,795 miles from the Arkansas governor's office, according to Google maps.

A self-described moderate conservative and history buff, Alling says he doesn't know much about Sanders' positions on issues, but admires how she fielded media questions "with clear-headed thinking" as press secretary for former President Donald Trump. And he's a fan of her father, former Arkansas governor and presidential candidate Mike Huckabee.

Alling cares less about what might happen soon at the governor's desk in Arkansas, more about "five, 10, 20 years in the future." That's when he thinks Sanders could "have a chance at a higher position in our government."

Sanders' donors also include those who can and do write bigger checks, people like Kenny Troutt of Dallas, a telecommunications company founder and owner of 2018 Triple Crown-winning racehorse Justify. The billionaire and regular contributor to Republican causes, with his wife, gave Sanders' campaign $11,200.

"Sarah is thrilled with the overwhelming support she has received from people in every county in our state and every state in our nation who trust her to be the last line of defense against the radical left in Washington and fight for our freedom, good schools, higher paying jobs, and a better life for all," campaign manager Chris Caldwell emailed in response to Arkansas Democrat-Gazette questions about fundraising.

"They're not giving you $9 million to care about Augusta, Arkansas," said Michael John Gray, a former state Democratic Party chairman who works now for a nonprofit trying to defeat Sanders.

"They're giving you money to control you, to own Arkansas, to advance their financial interests, their ideological interests."

Asked recently if she's nationalizing the Arkansas race, Sanders has said, "You bet I am." At a Republican fundraiser last month, she went on to say the state needs someone to "push back against the radical left."

Hal Bass, professor emeritus of political science at Ouachita Baptist University who taught Sanders there about 20 years ago, sees two factors at work in her historic fundraising success.

National media and special interest groups have ramped up their attention to state politics in recent years, Bass said.

"We were used to Arkansas politics being its own little world. It's not the case now," he said. "This nationalization of politics is happening quite independently of Sarah."

Sanders also carries unusually high name recognition for a person who's never run for public office, from her years in the Trump White House and her father's 10 years as Arkansas governor and two runs for President.

Bass thinks Arkansans would have to go back more than 55 years to find anyone comparable -- to former Gov. Winthrop Rockefeller who first ran for governor in 1964.

For Sanders, the "elephant in the room" is Trump, Bass said. "He has given her his seal of approval, pretty enthusiastically. That carries in Republican arenas."

If it could, Arkansas' race for governor could be all but over, campaign finance disclosure reports suggest.

Though Sanders is one of seven candidates running for governor in 2022, she has drawn almost 82% of all campaign contributions so far, according to reports through June 30 filed with the Arkansas secretary of state's office.

The four other candidates for governor report raising less than $10,000 each.

As a group, Democrats James Russell, Supha Xayprasith-Mays and Anthony Bland, along with Libertarian Ricky Dale Harrington, had collected $24,579, or 0.2% of all gubernatorial campaign donations.

Sanders also has spent the most money so far on the race, $2.8 million, according to her campaign's filings.

The Democrat-Gazette reviewed and analyzed more than 113,000 political contributions to active candidates for governor for this article, using the most recent data available, through June 30.

Other fundraising comparisons among the three biggest fundraisers:

• Sanders has raised nearly as much from Florida and Texas alone ($1.43 million) as Rutledge has from all states ($1.46 million).

• Jones has a higher percentage of out-of-state contributions than Sanders, 72.2% to 61%. But his dollar count doesn't compare. He reports $291,283 from outside Arkansas compared with Sanders' $4.6 million. The Rutledge campaign claims less than Jones from outside state borders, $276,900.

Behind the dollars are some well-known and regular political donors, including siblings Alice Walton and Jim Walton of Bentonville, $2,800 each; Ronald Cameron of Little Rock, owner and chairman of Mountaire Farms, $5,600; and financier Witt Stephens of Little Rock and family members, $25,200. All were Sanders' donors.

Among better known contributors to Rutledge are Stephen LaFrance Jr., a principal at Dale Capital Partners Inc. in Little Rock and part of the family that founded USA Drug, who with family members gave $16,800; Mark Waldrip of Moro, founder of Armor Seed Co., with his wife, $11,200; and nursing home owner Michael Morton of Fort Smith, $5,600.

A donor can give an Arkansas state candidate, for each primary, general election or other race, up to $2,900, according to the Arkansas Ethics Commission. Big donors often give up to $5,800 to a candidate facing a party primary and a general election.

"I'm confident the Leslie Rutledge for Governor campaign has the resources and experience to win," Berry wrote in an email.

The newspaper asked campaign officials for Sanders, Rutledge and Jones to talk about fundraising so far, and particularly the contributions to Sanders' campaign.

"My concern is what promises or back door deals have been made to get so much out-of-state interest and money flowing into an Arkansas election," Berry wrote. "I think most Arkansas voters would be deeply concerned if they realized how much out-of-state money was flowing into our state in an attempt to influence our elections."

"Fundraising alone does not make a candidate qualified, much less the inevitable winner."

Jones, responding by email through spokesman Reed Brewer, said Sanders' fundraising is no surprise to his campaign.

"We knew that Sarah Huckabee Sanders would raise a truckload of money," Jones emailed. "After traveling all across the state since our announcement, I can confidently say that Arkansans aren't looking for that. They aren't looking for division, chaos and outside interests.

"They are looking for unity, problem solving and a bright future. They want a governor who will improve our education system, expand our economy by focusing on small businesses and rebuild our infrastructure."

Jones wrote that his campaign knows "national money is going to blanket our state against us. So, it's going to take a huge outpouring of grassroots support to combat the mistruths and distortions that are sure to come."

Sanders' campaign provides "an outlet for many Republicans to yet signal their support for the Trump brand."

Arkansas elections, Parry emailed, have become "almost wholly nationalized," the same as elections elsewhere. In this environment, she said, it matters little what Sanders' opponents say about national attention and money from outside Arkansas.

"Trump Republicanism continues to be wildly popular here, so riding that train is all Sanders needs to do to win."

Print Headline: Cash from out of state floods governor's race