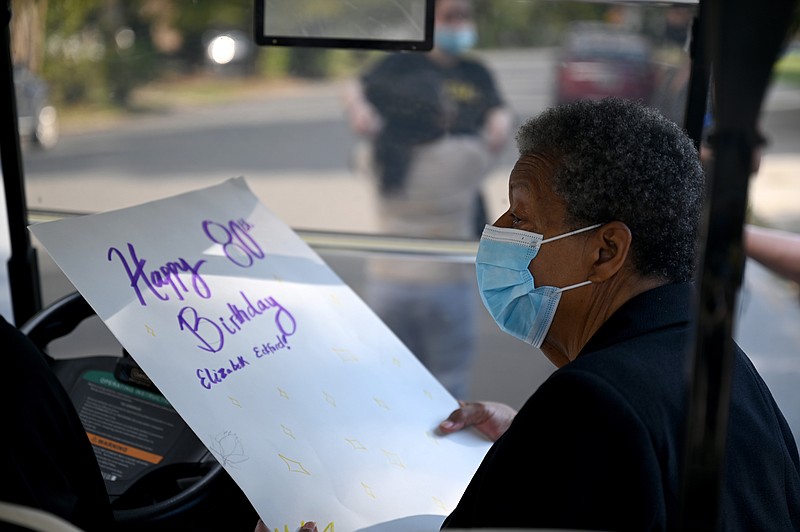 Just before 4:30 p.m. Monday, about a dozen Central High School students lined the sidewalk in front of the school with handwritten signs to celebrate the 80th birthday of Elizabeth Eckford, one of the Little Rock Nine.

Eckford said she has not celebrated a birthday in a long, long time. As a kid, she celebrated at home with family, but never had parties, she said. And she never attended any, describing her mother as the "Queen of 'No.'"

The students, who are members of the Civil Rights Memory Project, wanted to hold a drive-by birthday party for Eckford.

A park ranger drove Eckford in a golf cart from the Central High Museum down South Park Street, where the students were waiting to greet her.

Students were reminded not to clap or make loud noises, conscious that in 1957 Eckford was met on that same road by a loud mob of protestors who were angry that Eckford and a group of Black students were going to attend school with their white children.

“We’re so proud of her for telling her story now,” said Principal Nancy Rousseau.

“It’s amazing, the kids love her — she’s accepted and appreciated for her outreach, which wasn’t always the case,” she said.

As Eckford arrived in front of the school, she told Rousseau, “See — I’ve got my black and gold,” referring to Central's school colors.

Students and guests, including Mike Poore, superintendent of the Little Rock School District, took turns taking pictures with Eckford and telling her stories.

Eckford listened intently to the students.

The students gifted Eckford children’s books to donate to Stephens Elementary School in Little Rock, where she attended elementary school.

“It’s an honor to be here to celebrate with her, because she did so much for our school,” said Destiny Logan, a senior at Central.

“None of this would be here without her. She’s such an inspiration,” said Amelia Rios, another senior.

While posing for a photo with students, Eckford called Logan to the front of the group and instructed her to hold up her book.

Logan said Eckford said she likes shy people because it reminds her of herself as a kid.

She added that she didn’t really want to be in the photo, but wanted to be present with Eckford for the celebration.

Eckford later said she can sense when someone is shy and it’s a gift when a shy person extends to you.

“It was the best birthday I had in a long, long time,” Eckford said.