Cultivation facility expects its first medical marijuana harvest by end of the year by Thomas Saccente | October 4, 2021 at 4:04 a.m. 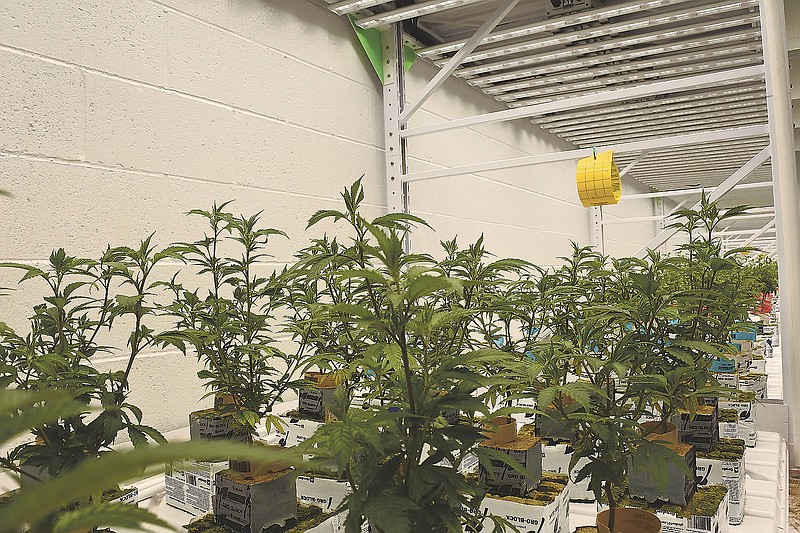 FORT SMITH -- A new medical marijuana cultivation facility is on the way to producing its first harvest.

Kristy Floyd, director of operations for River Valley Relief Cultivation, said the facility anticipates the harvest by the end of the year. The end product is intended to be high-quality cannabis at an affordable price sold at medical marijuana dispensaries throughout the state.

William Walton, cultivation director for River Valley Relief, said the facility plans to harvest 2,000 marijuana plants at a time with 35 harvests per year.

Storm Nolan, who owns the facility with his brother, Kane Whitt, said the business believes in the medical benefits of cannabis. It received the go-ahead from the state to begin operations July 28.

"In Arkansas especially, with opiate addiction, this is a way patients can truly manage their pain if they want to get off opiates," Nolan said. "We hear stories every week from patients who are more effectively managing their medical conditions with cannabis than traditional pharmaceuticals, and when you hear those stories, it's really moving and it makes this whole thing meaningful."

In addition to intractable pain, cancer, glaucoma, Crohn's disease, severe arthritis, post-traumatic stress disorder, Alzheimer's disease and HIV/AIDS are among the 18 conditions that can qualify patients for a medical marijuana certification.

Scott Hardin, spokesman for the Arkansas Medical Marijuana Commission, said about 80,000 patients in the state are approved to purchase medical marijuana. Arkansans have spent more than $400 million to purchase about 60,000 pounds of product since the first dispensary opened in Hot Springs in May 2019. The sales generated about $47 million for the state from the state sales tax of 6.5% and a 4% "privilege tax."

River Valley Relief Cultivation is one of six licensed cultivation facilities growing product, Hardin said. Amendment 98 to the Arkansas Constitution, which was passed by voters in 2016 and established the state's medical marijuana program, limits the total number of medical marijuana cultivators in the state to eight.

The other cultivators in production are Bold Team in Cotton Plant, Osage Creek Cultivation in Berryville, Natural State Medicinals Cultivation in White Hall, Good Day Farm in Pine Bluff and Delta Medical Cannabis Co. in Newport, according to Hardin.

They received their licenses from the Medical Marijuana Commission in 2018.

New Day Cultivation in Hot Springs and Carpenter Farms in Grady, which received their licenses in 2020 with River Valley Relief, are still working toward growing product.

Nolan said the more efficient River Valley Relief Cultivation is in growing high-quality medical marijuana, the lower the costs it will incur. Quality in this context is two components, according to Walton. This includes a marijuana flower's potency in its medicinal compounds, meaning cannabinoids, terpenes and flavonoids, and how free it is from pathogens and any residual chemicals or biochemicals applied during the cultivation process.

Floyd said the facility hopes to provide access to no-cost and low-cost medical marijuana for patients who demonstrate need.

Amendment 98 to the Arkansas Constitution limits the number of medical marijuana dispensaries in the state to 40. The Arkansas Medical Marijuana Commission has issued 38 of these licenses so far across eight different geographical zones. All but one are serving patients.