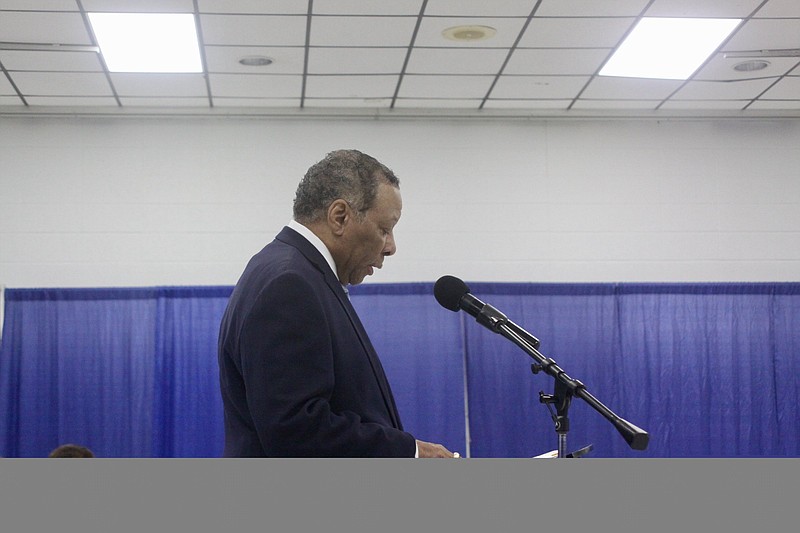 Joseph McCorvey, executive director of the Pine Bluff Convention Center and a long advocate for a new name-brand hotel said he has lost bids to host tournaments such as the SWAC basketball tournament because the hotel was inoperable and teams are staying in neighboring cities when they play local sporting teams.

The Pine Bluff City Council voted in favor of a resolution Monday night regarding the issuance of bonds for the renovation or reconstruction of the Plaza Hotel.

According to the resolution, the city council will authorize the issuance of bonds for the purpose of providing revenue for the Pine Bluff Civic Auditorium Complex Commission to reinvent the Plaza Hotel, provided that a feasibility study supports the financial viability of the hotel.

The Plaza Hotel, which is connected to the Pine Bluff Convention Center, was purchased by the Pine Bluff Urban Renewal Agency for $1.2 million in 2019.

Joseph McCorvey, executive director of the Pine Bluff Convention Center, has long advocated that the hotel be demolished and a new name-brand hotel be built in its place, To bolster his argument, he has cited the poor condition of the building and design elements that were popular 35 or 40 years ago but have since fallen out of favor for reasons of aesthetics or safety.

During Monday's meeting, McCorvey said the issue with the success and the marketability of the Pine Bluff Convention Center is that it was lacking a hotel in order to attract tournaments and conferences.

Originally advocating for a Hilton brand, McCorvey explained last week that Hilton decided not to go with Pine Bluff because they felt the city was still underdeveloped in the downtown area but that Marriott has expressed an interest in signing on to the project.

"They would be the ones to manage the property for the convention center auditorium complex," said McCorvey, who added that Beechwood Pinnacle Hotels, a Little Rock hotel management and development company, was selected to oversee the development of the hotel property.

Mayor Shirley Washington said Hilton was also not interested because they already operated the Hampton Inn.

"They were not interested in a second hotel," said Washington.

Still, some council members had their reservations, questioning why another feasibility study was needed considering one was already done when the Hilton brand was an option.

According to Washington, because the feasibility study was done for a 200-room Hilton hotel, a new one would need to show occupancy rates for the 125-room footprint that the Marriott would have.

The city and the commission have approved a development agreement with the P3 Group. P3 would be responsible for overseeing the demolition and reconstruction or the renovating of the hotel, in accordance with plans and specifications agreed to by and between the commission and the city. The feasibility study will be used to determine whether it makes more economic sense to renovate the existing hotel or tear it down and build something new from the ground up.

But before P3 Group can move forward in the bond market, the feasibility study must be done and prove the hotel will be profitable or the bond won't be issued.

According to the P3 Group, the city would not be responsible for the repayment of the bond.

Washington said that, with many of the events happening already from the statewide swim meets hosted by the city's aquatic center to future tournaments that attract people to Pine Bluff, many people wonder if the adjoining hotel to the convention center open.

McCorvey said he has lost bids to host tournaments such as the SWAC basketball tournament because the hotel was inoperable and teams are staying in neighboring cities when they play local sporting teams.

"If you've been on Facebook lately you've probably seen Stuttgart. They are promoting the fact that they are available to have attendees stay there at their new hotel -- Tru Hotel a Hilton brand," said McCorvey. "They are advertising for business that should be here in Pine Bluff. White Hall is benefiting from visitors coming into the area."

McCorvey said the opposing team coming to play UAPB for homecoming will be staying in Little Rock and that meeting planners and conference attendees prefer to stay closer to a convention center if possible for convenience.

The revitalization of the hotel would help the city attract conventions, business and church conferences, sporting events and other activities, officials have said.

In a previous interview, McCorvey said the convention center, in order to be viable, needs a quality hotel as a selling point.

The resolution validates McCorvey's point, stating that, in order to further promote tourism and economic development and realize the sale, advertising, and promotion taxes to be generated, the city and the commission believe that the hotel must undergo substantial renovation and reconstruction in order to reinstate it into an operational facility capable of supporting the convention center.