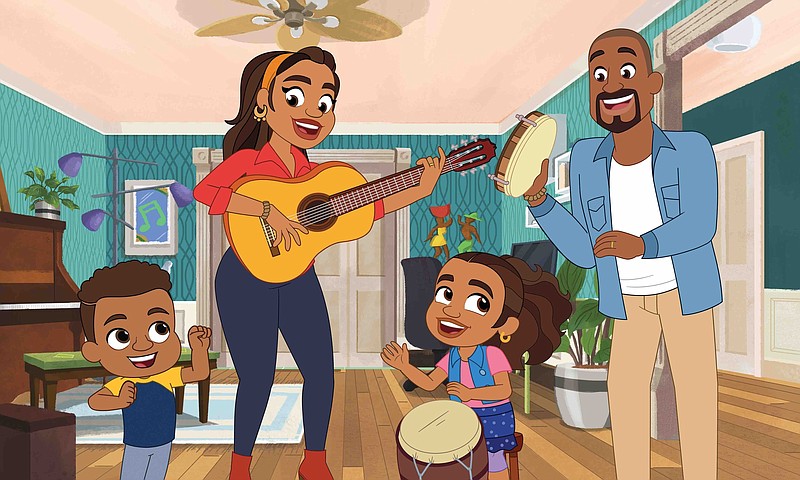 “Alma’s Way” features Alma Rivera (second from right), a Puerto Rican girl who lives in the Bronx borough of New York with her parents and younger brother, Junior (right). The series was created by Sonia Manzano, who played Maria on “Sesame Street” from 1971-2015. (PBS Kids via AP)

NEW YORK — Alma has a dilemma: The 6-year-old New Yorker has tickets for a baseball game on Saturday with her grandfather, but she told her uncle she'd help him with a dance recital that day.

"I promised I'd help him. I made a commitment," she says, taking a moment to think about her choices. "OK, I know what to do." She breaks the news to her grandfather — a promise is a promise. "I completely understand," he tells her. "It's good to honor your commitments."

The Fred Rogers Productions series has some starry creators. It was sparked and produced by Sonia Manzano, who played Maria while winning 15 Emmys as a writer on "Sesame Street." And no less than "Hamilton" creator Lin-Manuel Miranda helped supply the theme song.

"The main overriding hope is that I want kids to understand that everybody has a brain and they can use their brains and they can think. It's as simple as that," Manzano says.

Designed for children ages 4-6, each 11-minute episode tries to help kids find their own answers to problems, express what they think and feel and recognize and respect the unique perspective of others.

In one episode, Alma tries to help make her mom's mofongo dish better by quietly adding more and more ingredients. But it ultimately tastes lousy and she needs to come clean. In another, she stands up for her artistic vision on a mural, and in a third, she figures out how to cheer up her brother.

"Alma's Way" isn't just set in the Bronx, it's grounded in it, with authentic-looking houses, multicultural residents, elevated train tracks and honking cars. The series even asked the city transit authority for permission to use a likeness of the 6 train (and the announcer's call "Stand clear of the closing doors, please.")

"I think that more specificity just leads to more relatability, because the more real, the more true the characters feel, the more interesting it is," says Ellen Doherty, executive producer and chief creative officer of Fred Rogers Productions.

Manzano, who also voices the grandmother, wanted it to look like the neighborhood she knew so well and the people she grew up with. She considered every detail — even Alma's nose.

Her voice is supplied by 9-year-old Summer Rose Castillo, the daughter of April Hernandez Castillo, an actor with roles in TV shows such as "Dexter," "ER" and "Law & Order" and who was in the movie "Freedom Writers."

Summer Rose nailed the audition, in part by rapping about her school — Manzano thought she had "swag" — and recorded her vocal parts in a home studio built by her dad. They live, appropriately, in the Bronx.

Summer Rose says she likes to draw, write and sing. One of her biggest dreams is meeting Miranda. "It's really important for people to look at 'Alma's Way' and feel like there's a mirror and Alma looks exactly like them," she says.

There is music throughout — salsa, plena and bomba, along with other Latin genres such as Cuban son and Colombian cumbia. Miranda was tasked with writing the theme song with Bill Sherman and they came up with a delightful mashup of Latin music, hip-hop and rap.

"He can say with four words what it takes the rest of us 20," Manzano says about Miranda. "And in the theme song, you have to, like, pack in what the show is about."

In the episodes, Alma often witnesses adults dealing with a concern — a mom telling her partner that an item of clothing is too small — and then she applies it to her own life after thinking it over. Or she identifies a problem and works through it.

Doherty says the show is designed to help children who are transiting from nursery school to kindergarten or first grade, the times when they are unmoored by their routines.

"There are a lot more moments during the day when they have to figure stuff out, when there may not be an adult as present as they were when they were younger. And in those moments, we want to help them think through what what's going on," she says.

Doherty says she was inspired by two things: seeing a credit card company commercial that stops time led to Alma being able to take a beat and think about her situation, and "Fleabag," which championed speaking to the camera in a confessional way.

Parents in the show are very human, losing keys or accidentally including a beloved toy in the laundry, but are always ready with a hug. Its creator hopes parents and children will watch together.