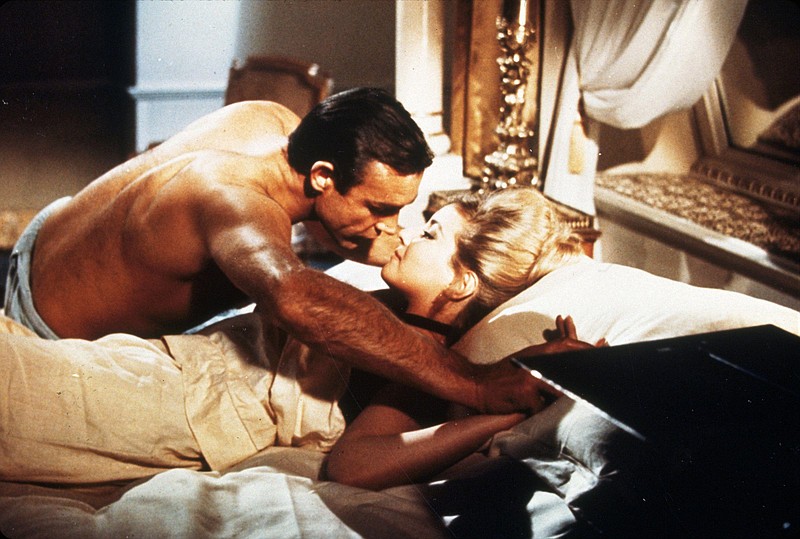 It's tempting to attribute the longevity of Ian Fleming's not-so-secret-agent James Bond to the paucity of new ideas in Hollywood. But while Tinseltown clearly prefers safe bets, 007 would have gone the way of Tarzan, Matt Helm or many of the villains he neutralized if he weren't as adaptable and chameleonic as real spies are.

The heirs of producer Albert "Cubby" Broccoli would stop making Bond movies if fans weren't willing to see him take on other spies, warlords, press barons, crooked financiers or the disciples of Spectre (Special Executive for Counterintelligence, Terrorism, Revenge and Extortion).

It's certain that 007 will have one hand holding a martini and the other pointing a Walther PPK, but you can learn a little about the era when a Bond movie was made by watching how he negotiates through it.

Back in 2003, the Kansas City Star assigned me to watch the entire series, and much of the experience felt like work. As a teenager, I was captivated by "Moonraker," but as an adult, the double entendres ("Dr. Goodhead") and attempts to cash in on the popularity of "Star Wars" made me feel like Bond after several stirred martinis.

Actually, in Fleming's novels Bond himself also found that killing people, drinking excessively and promiscuity was just a job. In "Goldfinger," Fleming observed, "Bond's lips turned down. Cut it out. Stop being so damn morbid. All this is just reaction from a dirty assignment. You're stale, tired of having to be tough. You want a change."

The movie adaptation opens with a different version the killing of a drug kingpin. Sean Connery seems almost gleeful as he dispatches the villain.

Curiously, Fleming understood why his character kept drawing readers back. Espionage was a "dirty business," and Bond was a "blunt instrument." With the fall of the British Empire and the rise of the Cold War, the ruthless MI6 agent was keeping the Soviets and Spectre at bay. With his broad shoulders and commanding presence, the late Connery made viewers feel like they had a champion in a scary world where nuclear war could happen at any moment.

If Connery had actually tried to join MI6, he might have had some difficulty. Standing at 6-foot, 2-inches, the actor didn't exactly blend. In an interview I conducted with real-life CIA agent Tony Mendez, who organized the mission depicted in Ben Affleck's "Argo," the decorated spy admitted, "He's too good looking."

If that might have ended his career in espionage, Connery also had a droll delivery, and there's something undeniably appealing about a working class Scotsman looking at home in a Saville Row suit. He made the rarefied world of James Bond feel accessible, and it was delightful to watch him take down his high-born opponents.

To understand why Connery was essential to the success of James Bond, it's important to note he wasn't the first actor to play the role. Barry Nelson played American agent Jimmy Bond in a 1954 TV adaptation of Bond's debut novel "Casino Royale" as part of the anthology series "Climax!" It's on YouTube, and while that deacon of depravity Peter Lorre is great as Le Chiffre. Nelson simply isn't forceful as his Scottish successor or as intimidatingly single-minded as Daniel Craig was decades later.

You can tell Connery was finding 007's adventures as tiring as the hero of Fleming's books did. The indifference is hard to miss in "You Only Live Twice," and only a generous paycheck brought him back for "Diamonds Are Forever."

Between those films Broccoli and his partner Harry Saltzman tried their luck with Australian male model George Lazenby, but "On Her Majesty's Secret Service" made only a fraction of the money Connery's films did, and Lazenby seemed a little too amiable to scare the likes of Ernst Stavro Blofeld.

As the '70s wore on, it's doubtful Connery's approach to the role or Fleming's original vision would have worked. During the early 1960s, spycraft seemed like a necessary evil.

But in the aftermath of the Vietnam War and Cointelpro, it just seemed, well, evil.

When Roger Moore picked up the Walther PPK, his adventures were even more outlandish than Connery's, and Bond's stakes got more global. My favorite of the Connery Bond movies is "From Russia With Love," where the prize is simply a coding machine.

In "Moonraker," Moore must save the world from poisons launched from space.

When I told people who grew up on Moore's breezier take on Bond what Fleming's original character was like, their jaws dropped. Moore seemed giddily aloof and like the model of job satisfaction. One imagines his James Bond would have written a glowing review for MI6 on Glassdoor.com. Moore once admitted that his favorite of his own Bond films was "The Spy Who Loved Me," where the lighter tone finally seemed to work. I've got a soft spot for "For Your Eyes Only," where Moore finally gets in touch with his inner sadist.

When Moore retired the role after "A View to a Kill," Welshman Timothy Dalton brought back some of Fleming's original grit. Audiences accustomed to Moore's genial manner were thrown by Dalton's appropriately cold manner. Dalton also took the role at the height of the AIDS crisis. Connery and Moore's prolific love lives seemed irresponsible. Lazenby's Bond had a deep, loving relationship with the recently deceased Diana Rigg, but dating a man who kills for a living isn't great for personal safety.

Premiere magazine once dubbed Bond, "Pig, Misogynist Pig," and they were right.

When Irishman Pierce Brosnan took the role in the 1990s, he now answered to Dame Judi Dench's M instead of Bernard Lee's. Actually, casting Dench was a nod to reality, as well as changing sensibilities. MI5, which deals with domestic security, had Dame Stella Rimington as its Director General from 1992 to 1996.

Brosnan's Bond is still a lecher, but his female allies and opponents almost have a quota of bloodshed to meet. In "Tomorrow Never Dies," it's a treat to watch Michelle Yeoh taking out armies with punches and kicks while Bond has to settle for bullets. Teri Hatcher even slaps 007 for his aversion to commitment. Subsequent installments featured less interesting female characters, and it's a wonder the series didn't end with Denise Richards' unfortunate turn as scientist Christmas Jones. Her character didn't seem like she could spell "atoms," much less manipulate them.

In an interview, I read with Brosnan, he admitted that he'd never really gotten a grip on his now most famous role, and it is more rewarding to watch him as a heartless Russian agent in "The Fourth Protocol" or as a dissolute Bond parody in "The Tailor of Panama."

Since 2006, Daniel Craig has played what he calls the "grumpy Bond," and in "Skyfall" and "Casino Royale," it has worked beautifully. Around the time he became the blunt instrument, the War on Terror made external threats seem scary again. In addition, Jason Bourne proved to audiences that spies didn't have to dish out wisecracks after dispatching antagonists. The smart thing was simply to leave the scene of the killing.

Craig's Bond started over from scratch in "Casino Royale," so he could have a meaningful relationship with Eva Green's Vesper Lind and didn't have to remind the world what he wanted in a martini. Screenwriters Neal Purvis and Robert Wade have worked on all the Bond films since Brosnan's last outing "Die Another Day," and even in that movie, they contributed an important correction to the Bond formula.

After several decades, Bond's survival never seemed in doubt. After seeing him take on killer satellites, there wasn't much tension in whether he'd get out of his constant barrage of danger. In "Die Another Day," however, the movie begins with the North Koreans capturing Bond, which prevented the movie from being as dull as watching someone else play a cheat code on a video game.

Having contributors like Oscar-winner Paul Haggis ("Crash") and John Logan ("The Aviator") in the writers room doesn't hurt, either. The former dropped the corny quips for more lifelike banter, and the latter added an intriguing edge to Bond that neither Connery nor Moore would have tried. In "Skyfall," Javier Bardem taunts Bond with hints of homoeroticism. "Well, first time for everything."

Bond retorts, "What makes you think this is my first time?"

Logan, who is gay, correctly figured audiences would love Bond's comeback, and my crowd howled with delight while earlier Bond fans might have winced in horror. In both "Casino Royale" and in "No Time to Die," Bond wrestles with the fact that he can form deep emotional attachments but is in a profession where those connections can be fatal or don't last long.

During my interview with Mendez, he and his wife, Jonna, said they lasted as a couple because the two were both in the Agency, and she even took over for him as the head of the disguise division. She said that agents tend to marry other agents because they are the only ones who understand the toll the profession can take.

Perhaps someone should have told Commander Bond.

Craig declares that he is done with the role, and his turn as an eccentric sleuth in "Knives Out" shows he'll find other work easily. With a few adjustments, 007 may continue his longevity as well. 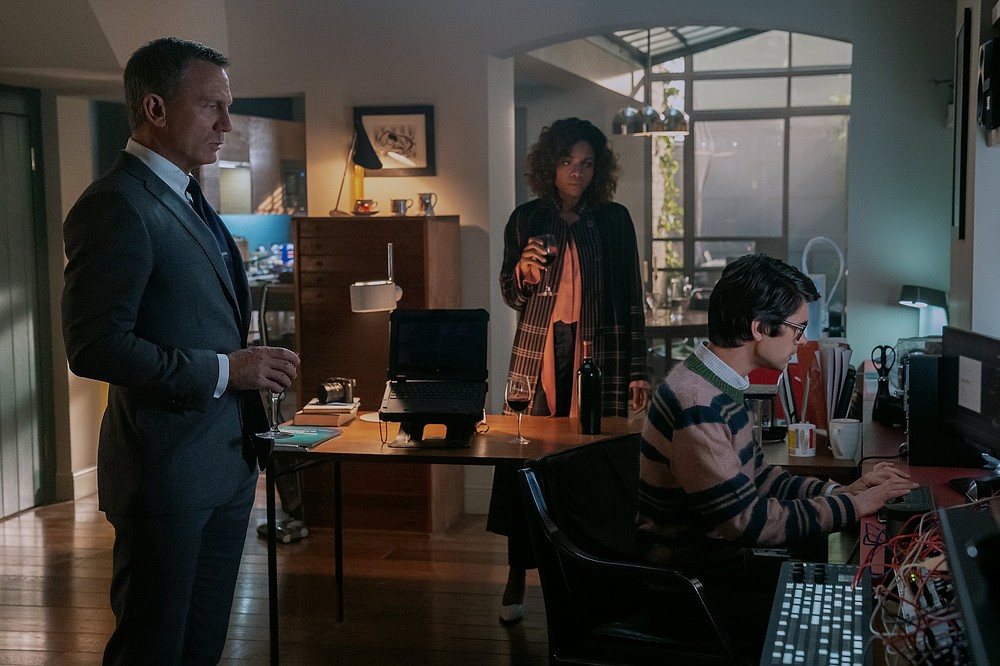 Getting the band back together: James Bond (Daniel Craig), Moneypenny (Naomie Harris) and Q (Ben Whishaw) chop it up one last time in Cary Joji Fukunaga’s “No Time to Die.”