NAACP to hold its gala online 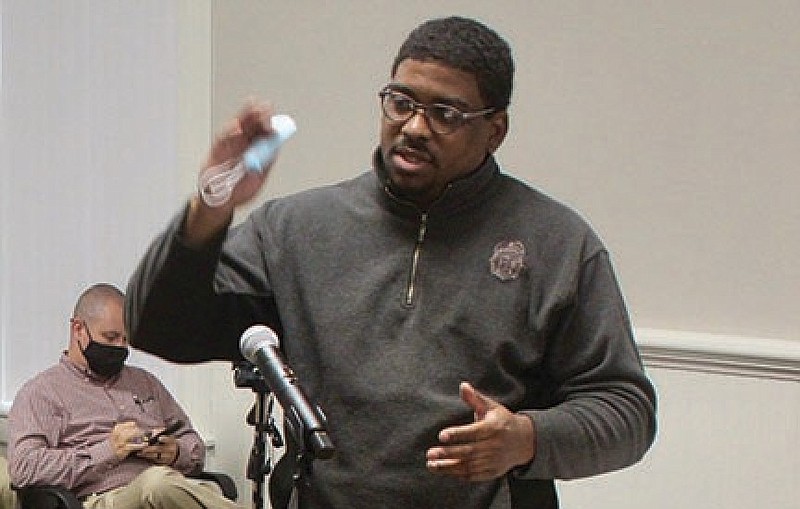 Jefferson County Sheriff Lafayette Woods speaks during a meeting of the county Quorum Court in Pine Bluff in this June 2021 file photo.

The Pine Bluff Branch of the National Association for the Advancement of Colored People will be celebrating its 29th Annual Dove Freedom Fund and 100 Year Anniversary Gala Friday, October 22, 2021, at 6:30 p.m.

Due to covid-19, the event will be held virtually.

"Since assuming command of the Jefferson County Sheriff's Office (JCSO), Sheriff Lafayette Woods, Jr. has transformed JCSO into one of the most accountable, progressive, and respected public safety agencies in Arkansas through his dynamic and progressive leadership," said NAACP officials in a news release.

Woods is a life member of the organization and an advocate for equal social justice and equality for all, according to a news release.

Woods said this year's theme, speaks to continued efforts for the call and demand for positive change on issues like social justice, economic equality, equitable educational resources, and democracy.

"As the 32nd elected Sheriff of Jefferson County, I understand the grave importance of accountability of law enforcement officers for unconstitutional and unethical conduct," Woods said. "As a profession, law enforcement officers' actions are sometimes grounded in their expectation to always expect the worst. To save lives, we must reinforce thinking beyond the badge and gun holster."

· Updating members on key bills considered in the 2021 Legislative Session

· Campaigning for improvement of school districts in Pine Bluff

· Participating on the City of Pine Bluff COVID-19 Task Force

As the largest branch in the State of Arkansas, the Pine Bluff NAACP Branch has been active for 101 years.

"Together, we created an unprecedented civic engagement effort like no other -- despite a pandemic, an economic crisis, and so many attempts to stop us -- to vote for our community and the things we care about, and to make life better for all of us," said the chapter's secretary and event coordinator, Dorothy J. Oliver. "We remain a uniting force in the movement, coalescing together leading voices and organizations to collaborate on initiatives that bring us closer to the future we all envision."

Woods said when he reflects on the years of the rich history of the NAACP, the nation's largest and most widely recognized civil rights organization, he can't help but focus on influential figures like W.E.B. Du Bois, Ida B. Wells, and Mary White Ovington, who helped champion the cause of the NAACP and created the foundation from which local branches like the Pine Bluff Branch sprang.

"Efforts on a national level have cultivated and inspired that same work among local branches, whose members I believe understand the sacrifices, achievements, and the assignment ahead of "Always Fighting Forward" in order to bring about positive and meaningful change," said Woods. "I am an advocate for equal protection under the law, social justice, and many other issues that lead to a path to justice, which requires that we as a community and human race challenge federal, state, and local laws, statutes, and policies to ensure that equal protection is provided and not simply a statement."

According to Oliver, The Pine Bluff Branch NAACP is supported almost entirely by donations and sponsorships by corporate, business, religious, civic and community partners. The branch does not receive any funding from the government.

The Pine Bluff Branch NAACP supports a Youth Council for students ages 12 to 18 and a college chapter at the University of Arkansas at Pine Bluff.