But deep divide yet to be crossed by Compiled Democrat-Gazette Staff From Wire Reports | October 8, 2021 at 7:09 a.m. 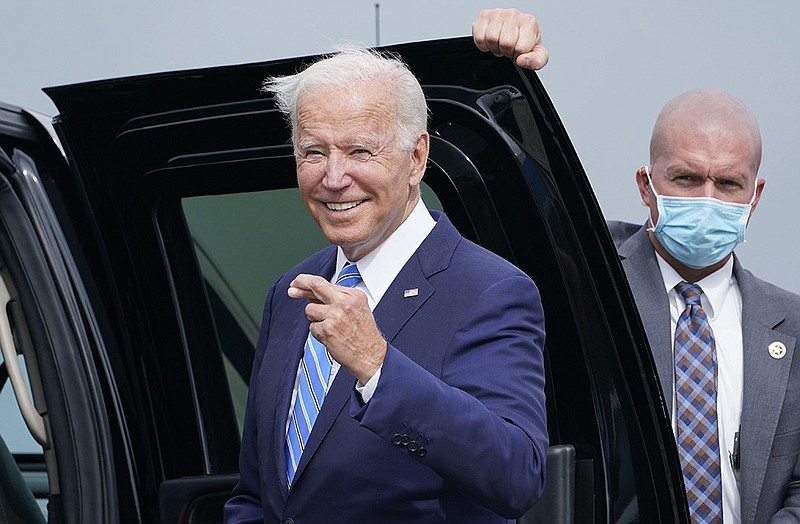 President Joe Biden responds to a question as he arrives Thursday at O’Hare International Airport in Chicago about the short-term debt agreement that was approved later in the day by the Senate. (AP/Susan Walsh)

WASHINGTON -- The Senate voted Thursday night to extend the government's borrowing authority into December and temporarily avert an unprecedented federal default that experts warned would devastate the economy and harm millions of Americans.

The vote of 50-48 in support of the bill to raise the government's debt ceiling by nearly a half-trillion dollars brought instant relief in Washington and far beyond. However, it provides only a reprieve. Assuming the House goes along, Republican and Democratic lawmakers will still have to tackle their deep differences on the issue once more before year's end.

That debate will take place as lawmakers also work to fund the federal government for the new fiscal year and as they keep up their battling over President Joe Biden's top domestic priorities -- a bipartisan infrastructure plan with nearly $550 billion in new spending as well as a much more expansive, $3.5 trillion effort focused on health, safety net programs and the environment.

The Republican Senate leader, Mitch McConnell of Kentucky, offered his support for a short-term extension of the government's borrowing authority after leading solid GOP opposition to a longer extension. He acted as Biden and business leaders voiced their concerns that a default would disrupt government payments to millions of Americans and throw the nation into recession.

The GOP concession was not popular with some members of McConnell's Republican caucus, who complained that the nation's debt levels are unsustainable.

[Video not showing up above? Click here to watch » arkansasonline.com/108debtlimit/]

"I can't vote to raise this debt ceiling, not right now, especially given the plans at play to increase spending immediately by another $3.5 trillion," Sen. Mike Lee of Utah shortly before the vote.

And Sen. Ted Cruz of Texas said the Democrats had been on "a path to surrender" on the process used to lift the debt cap, "and then unfortunately, yesterday, Republicans blinked."

But Sen. Lisa Murkowski of Alaska was among those voting to advance the bill.

"I'm not willing to let this train go off the cliff," she said.

Eleven Republicans voted to end debate, providing the threshold needed to move the bill to a final vote. However, no Republicans sided with Democrats in the final vote for the measure. McConnell has insisted that the majority party will have to increase the debt ceiling on its own.

Congress has just days to act before the Oct. 18 deadline after which the Treasury Department has warned it will quickly run short of funds to handle the nation's already accrued debt load.

The House is likely to return to approve the measure next week.

Republican leaders worked through the day to find the 10 votes they needed from their party to advance the debt limit extension to a final vote, holding a private huddle late in the afternoon. It was a long and "spirited" discussion in the room, said Sen. Josh Hawley of Missouri.

McConnell allowed for an airing of all views and ultimately told the senators he would be voting yes.

The White House signaled Biden's support, with principal deputy press secretary Karine Jean-Pierre saying the president would sign a bill to raise the debt limit when it passed Congress. She also said, "It gives us some breathing room from the catastrophic default we were approaching because of Sen. McConnell's decision to play politics with our economy."

For now, at least, the agreement over the debt ceiling spares Washington from what experts broadly saw as a financial doomsday that could have rattled markets globally and plunged the United States into a new recession. Biden in recent days had pressured Congress to act, blasting Republicans for obstructing a long-term increase to the borrowing cap while huddling with the nation's business leaders to further make the case for swift action.

To that end, financial markets appeared to reward news of the Senate deal, with the Dow Jones industrial average surging more than 330 points by the end of trading Thursday.

The uptick only served to confirm the stakes in Washington's fiscal stalemate, which earlier in the week raised the prospect that the United States could suffer a credit downgrade.

As the vote approached, former President Donald Trump, in a brief statement, implored Republicans to reject "this terrible deal being pushed by folding Mitch McConnell."

Congress raised the debt ceiling three times while Trump was in office, including in 2019, when it was suspended for two years.

Treasury Secretary Janet Yellen had warned in recent days that the debt ceiling would be breached around Oct. 18 without congressional action.

"Everyone including me breathed a sigh of relief that we were able to reach an agreement that gets us to December third, but we do need to settle it longer term," Yellen said in an interview Thursday afternoon with CNN. "So we've got more work to do to get well past December third."

Yellen also repeated her call to ditch the limit, which leaves the Treasury chief with conflicting instructions to both make payments authorized by Congress yet to not raise debt in order to do so.

"It's become increasingly damaging to America to have a debt ceiling," Yellen said. "It's led to series of politically dangerous conflicts that have caused Americans and global markets to question whether or not America is serious or not about paying its bills. It's flirting with a self-inflicted crisis."

The accord sets the stage for a sequel of sorts in December, when Congress will again face pressing deadlines to fund the government and raise the debt limit before heading home for the holidays.

The $480 billion increase in the debt ceiling is the level that the Treasury Department has said is needed to get safely to Dec. 3.

"I thank my Democratic colleagues for showing unity in solving this Republican-manufactured crisis," said Senate Majority Leader Charles Schumer of New York. "Despite immense opposition from Leader McConnell and members of his conference, our caucus held together and we have pulled our country back from the cliff's edge that Republicans tried to push us over."

"The pathway our Democratic colleagues have accepted will spare the American people any near-term crisis, while definitively resolving the majority's excuse that they lacked time to address the debt limit through [reconciliation]," McConnell said Thursday. "Now there will be no question: They'll have plenty of time."

Information for this article was contributed by Kevin Freking, Alan Fram, Alexandra Jaffe, Lisa Mascaro, Josh Boak and Damian J. Troise of The Associated Press; by Tony Romm of The Washington Post; and by Laura Litvan, Erik Wasson and Laura Davison of Bloomberg News (TNS). 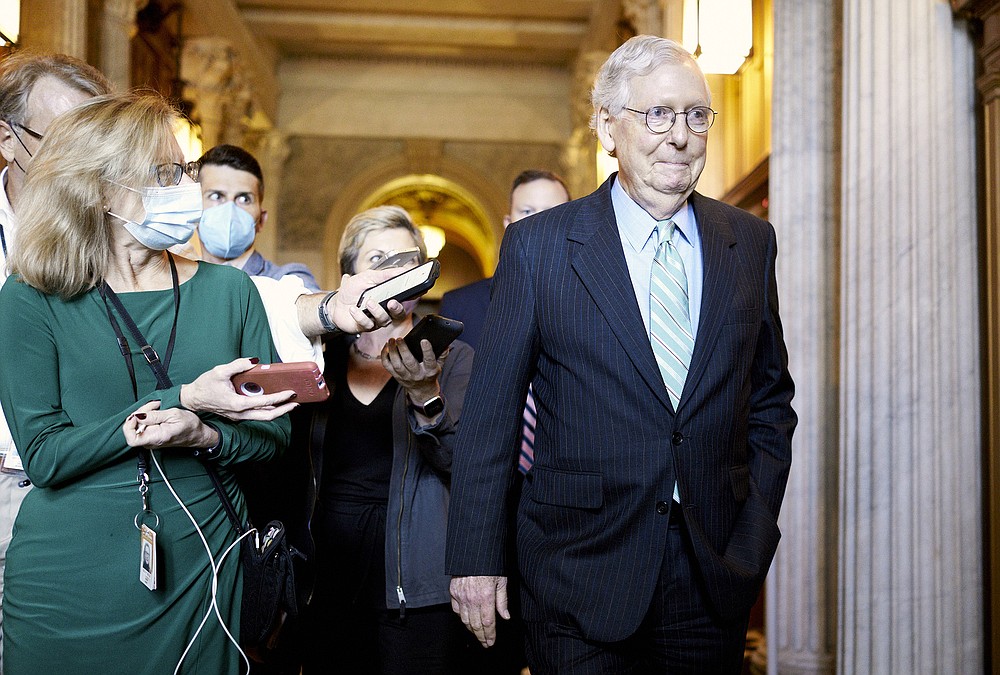 Senate Minority Leader Mitch McConnell arrives Thursday at the Capitol for a luncheon with Senate Republicans. McConnell’s support for a short-term increase in the federal debt ceiling was met with anger by some GOP colleagues, with Sen. Ted Cruz contending the Democrats had been on “a path to surrender” before Republicans “blinked.” (The New York Times/T.J. Kirkpatrick) 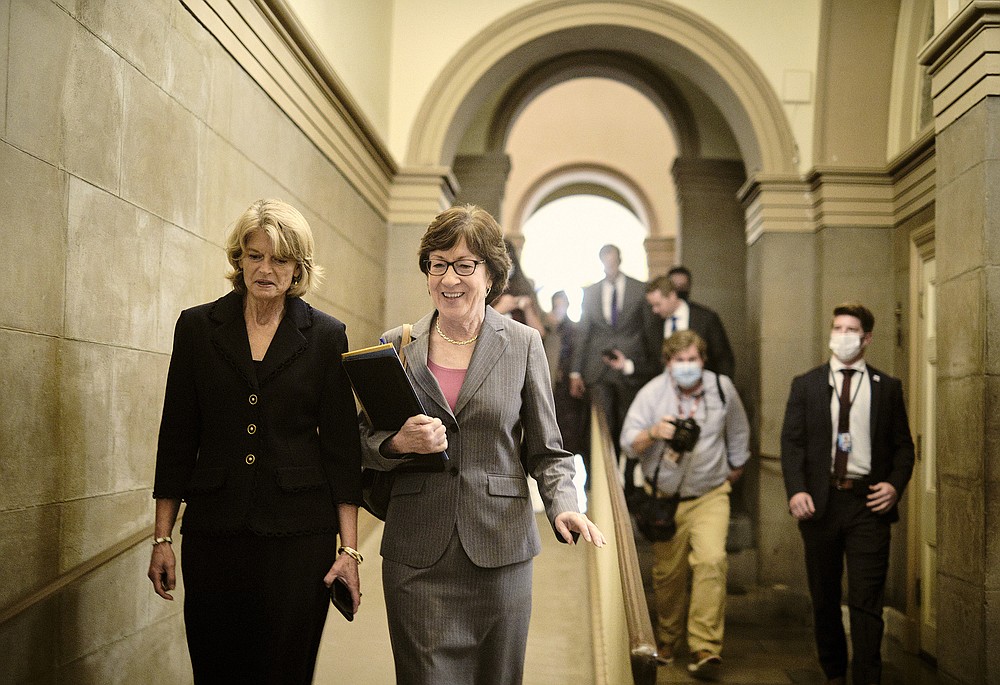 Sen. Lisa Murkowski (left) and GOP colleague Sen. Susan Collins of Maine walk together at the Capitol. Murkowski voted for the debt ceiling extension, saying, “I’m not willing to let this train go off the cliff.” (The New York Times/T.J. Kirkpatrick)