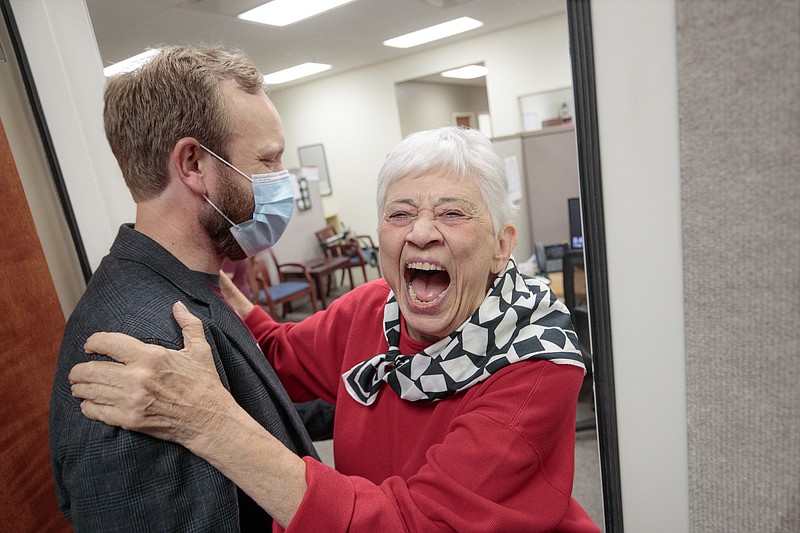 Former KUAR-KLRE staff member and current volunteer Mary Waldo and with stations' General Manager Nathan Vandiver celebrate the announcement that an anonymous donor has given the public radio stations a $1.5 million endowment. (Special to the Democrat-Gazette/Benjamin Krain)

An anonymous donor has given a donation of $1.5 million to the University of Arkansas at Little Rock Public Radio.

The university operates two stations — KUAR-FM, 89.1, which carries news programming from National Public Radio and a range of national and local programming, and KLRE-FM. 90.5, which airs classical music 24/7.

It is the largest cash donation to the radio stations in their history.

The university announced the donation on the air on Friday, the final day of the stations’ weeklong annual fall fund drive, which is seeking $150,000 over the course of five days. Donations topped $100,000 during the morning “drive.” Staff members and volunteers celebrated loudly enough to be heard on the air.

"This gift is a wonderful testament to the impact of public radio,” said Nathan Vandiver, general manager of UALR Public Radio, in a news release.

"The purpose of the gift is to provide an ongoing stream of operating funds to support UA Little Rock Public Radio," Vandiver added in an interview with the Democrat-Gazette. "With that in mind we will be applying this gift to strengthen and expand [our] services as the region's NPR news and information provider, classical music radio station and as a local and regional news organization."

What will be called the UA Little Rock Public Radio Operating Endowment will provide approximately $60,000 a year to support reporting, music and cultural programming.

The public radio stations, with a combined listenership of approximately 80,000 a week, according to the release, are part of the university’s College of Humanities, Arts, Social Sciences and Education. They provide professional experience in news reporting and broadcast production to students who work as interns and part-time staff members.

“This generous endowment provides both stability and a steady revenue source that allows us to plan for the future of KUAR and KLRE,” Christian O’Neal, vice chancellor for university advancement, said in the release. “This anonymous donation will leave a lasting impact on public radio in our community for years to come.”

O’Neal announced the endowment on the air at KUAR at 8:45 a.m. Friday.