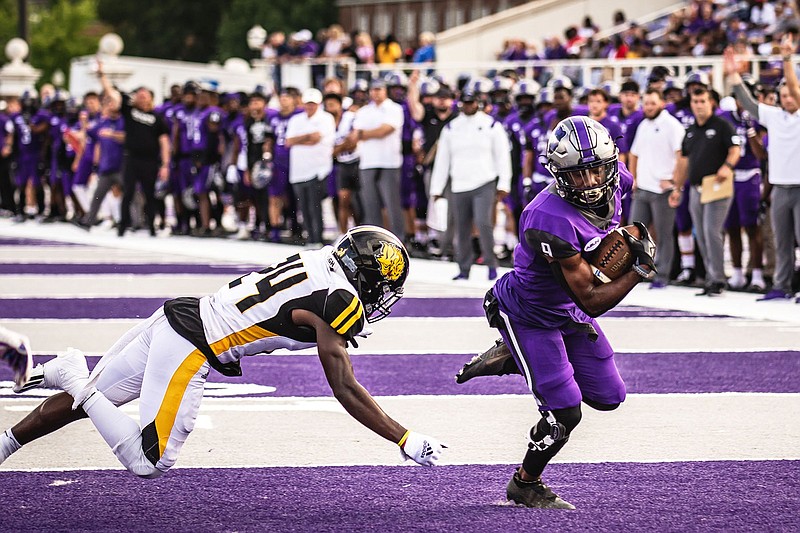 Central Arkansas junior receiver Christian Richmond is making an impact for the Bears a year after sustaining leg injuries that required surgery. Richmond, the leading kick returner, is third on the team in touchdowns with five and in receiving yards with 186. (Photo courtesy Central Arkansas Athletics)

Christian Richmond swore the bone was sticking out of his leg. With the amount of pain he was in, what just happened had to be that bad.

Richmond, who was two games into his second season with the University of Central Arkansas in 2020, was on the ground after making a cut in practice.

"I started tearing up, but not really from the pain," Richmond said. "More because I knew there was something seriously wrong."

The sophomore receiver came off the field on crutches and went to Conway Regional Hospital that evening, where he was given an official diagnosis -- three torn ligaments and a partially torn hamstring. He underwent surgery for the injuries and was given a rehabilitation timetable between 18-24 months.

But nine months later, Richmond was cleared, and he's back on the field making an impact for the Bears.

"That's just a testament to his body, his work ethic, his commitment to getting back and getting back fast," UCA Coach Nathan Brown said. "And you can't even tell that he had the injury, other than him wearing a knee brace."

Richmond's speed is his X-factor. The junior, who's listed at 5-8 and 175 pounds, is a noticeable complement to All-Americans Tyler Hudson and Lujuan Winningham, who are both listed at 6-3. He's third on the team in touchdowns with 5, is the Bears' leading kick returner and third on the team with 186 receiving yards.

However, looking at a timetable that had him back to full health somewhere between February and next July had Richmond distraught, he said. He hadn't missed a full season in 15 years of playing football.

"I was broken, but I knew, with God's help, anything's possible," Richmond said. "So, I just dug deep and started doing well in my rehab."

Richmond did rehab in Conway, but he also spent a lot of time rehabbing with his trainer back home in Houston, Kevin Steets. Steets and Richmond have known each other since Richmond played Pop Warner football, and Steets helped him work through a shoulder injury in high school.

Steets, who worked for multiple years as a trainer both collegiately and professionally, said that Richmond's injury was one of the oddest he's ever seen.

"I joke with him all the time, I'm like, 'If you're going to do an injury, you really go all out,'" Steets said.

Even with the severity of Richmond's injury, Steets wasn't surprised by the receiver's ability to get through rehab as quickly as he did.

Looking back, Richmond said the rehab process felt a lot longer than it did in the moment, largely because he was taking the process one day at a time and practicing a patience Steets preached. Nearly halfway through his first season back since the injury, Richmond, who wears a brace on his right knee, said he hasn't dealt with any lingering issues and that he has "100% confidence" in his knee.

Steets said he believes Richmond came out from the injury even better than before, with stronger legs, improved flexibility, as well as experience facing adversity.

"I think it was a bit of a blessing in disguise," Steets said. "It happened to him a little bit earlier in his collegiate career where he still has years of eligibility left and good play available, but it's kind of changed him a little bit and what it's going to take to continue to improve and excel."