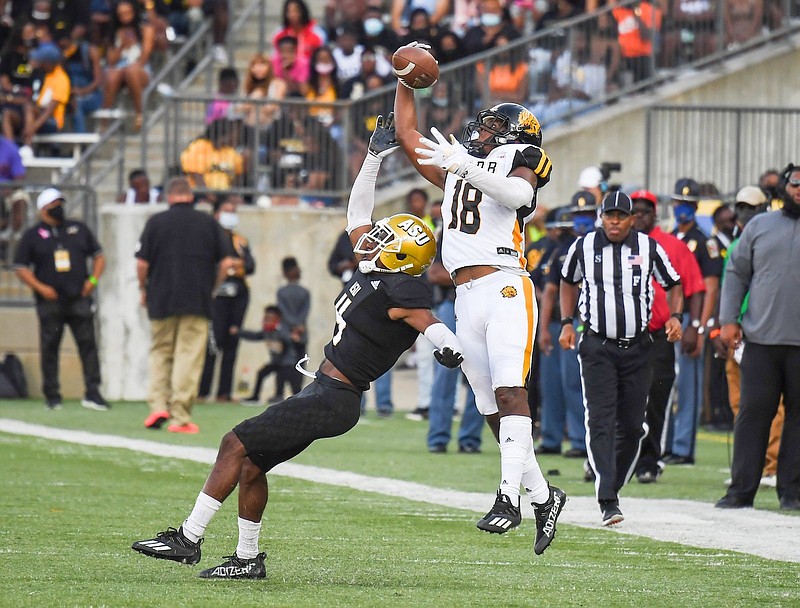 UAPB receiver Dalyn Hill catches a pass with one hand over Alabama State defensive back Jacquez Payton and runs the rest of the field for a 70-yard touchdown play in the fourth quarter Saturday in Montgomery, Ala. (Special to The Commercial/Brian Tannehill)

MONTGOMERY, Ala. -- The troubles weren't supposed to last for the University of Arkansas at Pine Bluff football team, but they've gone on for four straight weeks.

The Golden Lions have yet to figure out how to turn the page from a losing streak that's now grown to four games after Alabama State beat them 35-15 on homecoming Saturday at ASU Stadium.

"We're not playing clean football on offense right now," Lions Coach Doc Gamble said. "That's the bottom line. We've got to get some things fixed, but it's long overdue here."

The struggles are evidenced in the Lions' latest drive chart.

Most of those miscues came before Piwniczka -- who was 6 for 6 going into Saturday's game -- converted a 28-yard field goal in the third quarter and Xzavier Vaughn threw for two touchdowns in relief of Skyler Perry, who completed 7 of 25 passes for 43 yards with an interception.

Gamble was asked after the game if he would consider starting Vaughn, a redshirt freshman from Beaumont, Texas, over the fourth-year junior Perry going forward. Perry has completed 71 of 156 passes for 772 yards and 2 touchdowns with 2 interceptions.

"I don't know," Gamble said. "We're going to evaluate everything and make a decision. We have won a bunch of games with Skyler, but we've shown we got another good, capable quarterback, and we'll make a decision for what's best for our team."

Gamble also said Vaughn is able to see the game as a whole from the sideline.

Asked about the idea of challenging for the starting role, Vaughn said, "I'm just going to keep playing my role and wait my turn."

He made a case with three touchdowns during his most extensive work to date in the past two weeks. Vaughn threw a 16-yard touchdown pass to freshman Daemon Dawkins on his first drive in the fourth quarter and then hit Dalyn Hill, who caught the pass over a defender with one hand and ran half the field on a one-play, 70-yard drive to pull UAPB within 28-15 with 4:10 to go.

"We get extra work in with the guys and just a special connection and chemistry we have. That's how I'm able to do that," he said.

"The o-line set their box perfect, so I just had to hit the hole," said Britten, of Cincinnati. "I got some good looks."

Britten is among a talented freshman class seeing more playing time as the season goes on. His message to the teammates in the midst of struggle is just to keep their heads up.

"We've just got to execute and get it done, that's all," Britten said. "It's frustrating, but we know we've got to watch film and execute to change what we did wrong."

UAPB will host Southern University in the Lions' first homecoming game in two years. Kickoff is scheduled for 2 p.m. next Saturday, with a livestream on ESPN+. 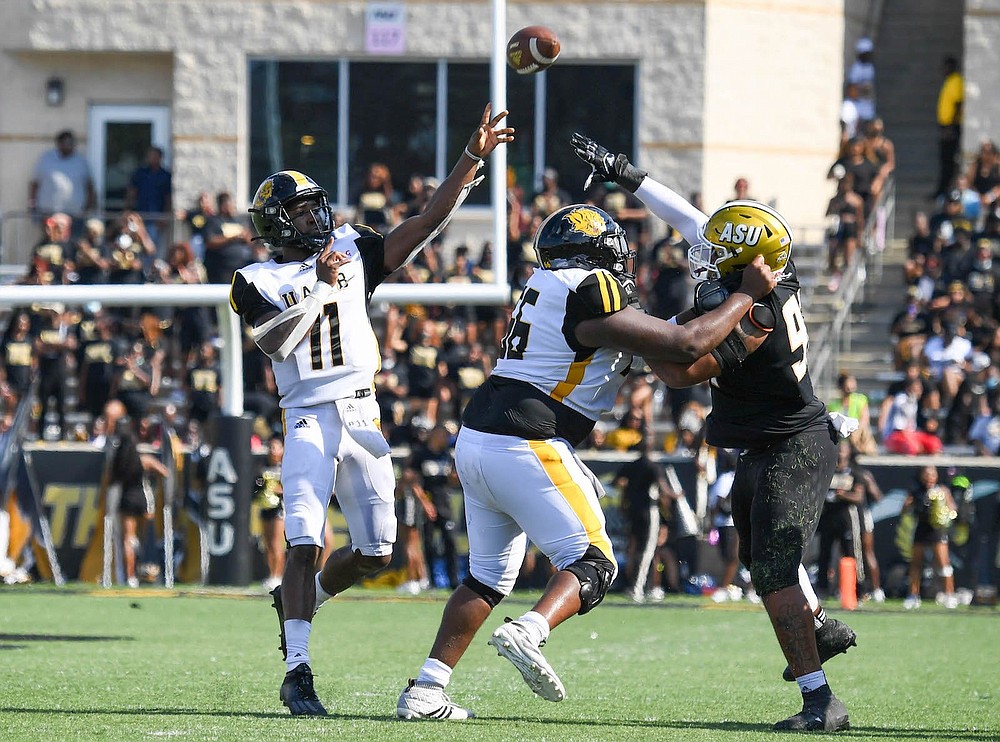 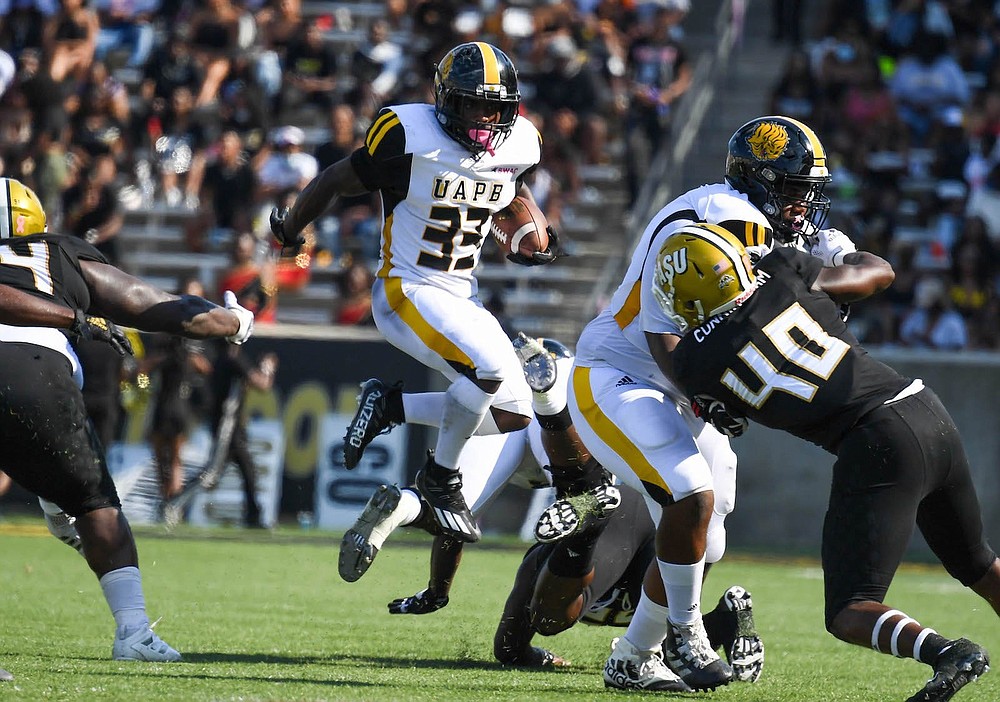 UAPB running back Kayvon Britten hurdles over a would-be tackler as a teammate blocks Alabama State linebacker Demarkus Cunningham on Saturday in Montgomery, Ala. (Special to The Commercial/Brian Tannehill)