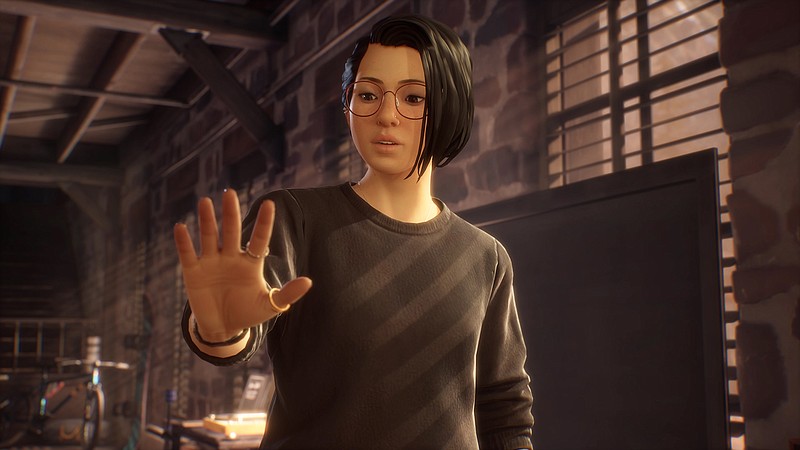 Alex Chen, viewpoint character of the video game "Life Is Strange: True Colors" must embrace her curse -- the psychic power of empathy -- to learn the truth about her brother's death. (Photo courtesy of Deck Nine, Square Enix)

Who knew a game about death, corporate corruption and heinous atrocities could have such a positive message?

I think I was destined to love "Life Is Strange: True Colors." The game is set in Colorado in a made-up town called Haven Springs, eerily similar to Colorado Springs, where I grew up. But according to the internet, and some educated guessing, Haven Springs is actually based on a real-life Colorado town called Idaho Springs. Looking at Google images and comparing the game graphics to real-life photos, that educated guess becomes more of a certainty.

You play as 21-year-old Alex Chen. You learn that she has had to navigate the foster care system, with limited success, but has gotten in contact with her long-lost brother, Gabe Chen.

Oh, and you also have empathic powers that allow you to sense the emotions of the people around you. So, you know, a pretty normal teenage experience.

Your empathic powers manifest in colors. When people are angry, a red aura glows around them. When they're sad, a blue aura manifests; when they're anxious or afraid a purple aura surrounds them, etc.

If that set-up sounds boring, don't worry — I thought the same thing until the game threw a gut punch and killed Alex's brother. After that, the game turns into a character-driven mystery.

But as engaging as the plot is, with themes of death, corruption and tragedy, "Life Is Strange: True Colors" shows its, well, true colors in its characters.

Before I was invested in video games, I was drawn to novels because I believed novels were the only medium in which the audience could delve into a character's mind and get a deeper insight into a character's thoughts, motivations and, you guessed it, feelings. Yet "Life Is Strange: True Colors" manages to do the same thing through its game mechanics. It lets you gain deeper insight into how characters are reacting and why they react the way they do.

For instance, when you're speaking with Charlotte, Gabe's girlfriend, you comment that she must be proud of her son, and she lashes out at your character. You sense her anger and, with your powers, are able to delve into her mind and learn the root of her anger.

Later in the game you are speaking with Pike, the police officer of the town, when suddenly he reacts aggressively toward you. One would assume his aggression is anger, yet when using your powers, you realize his aura is purple, the color of fear/anxiety. By delving deeper, you learn the source of his anxiety.

This doesn't just apply to main characters either. The game employs recurring background characters, which makes sense thematically, considering that Alex Chen lives in a small town. These characters may have feelings for one another but are bad at showing it, or they may simply be worried about a lost pup. You can use your powers to briefly help these side characters, which makes the game feel more alive and supports the message that even a small act of kindness can cause a profound change in the world.

[Video not showing up above? Click here to watch » arkansasonline.com/1011strange/]

Ultimately, through its mechanics, the game teaches the player empathy. It teaches the player how to see the world through someone else's eyes and make it so no character is truly a villain. By delving into other characters' emotions, you understand where they're coming from and what leads them to do the things they do, whether that emotion be jealousy, fear or feeling as though they're in too deep and unable to pull away, while wanting desperately to be perceived as a good person.

Seeing the world through another's eyes isn't an ability you need superpowers to wield, and the game gives you a symbolic way to apply its lessons to real life. If someone lashes out at you, you can think about what might be going on in that person's life to cause such a reaction. Maybe that person is angry, or maybe that person is afraid of something outside of his or her control.

You can also use the game's framework to better comprehend your own emotions. When I'm angry, I can visualize a red aura surrounding me and the earth cracking beneath my feet, representing how it feels like the world is crumbling around me. Or when I'm grieving, I can imagine a blue aura and hear the tidbits of conversation surrounding the objects of a loved one who died unexpectedly.

As my boyfriend aptly put it: You feel like a better person for playing the game.

In "Life Is Strange: True Colors," Alex's powers represent her social anxiety. Throughout the game, she struggles to maintain eye contact (a common symptom of social anxiety), and she's extra sensitive to how people react in the world around her, thus her empathic abilities.

While informed by their vulnerabilities, the characters' powers also make these characters feel that they don't belong in the world. The point is that the very thing that makes them unique and special simultaneously makes them feel alone and broken.

In that way, I think the Life Is Strange universe is telling us that, yes, life is indeed strange. But what makes life strange is also what makes it special. The same can be said for each of us. And for a made-up world in which powers and magic exist, that's a very real and powerful message.