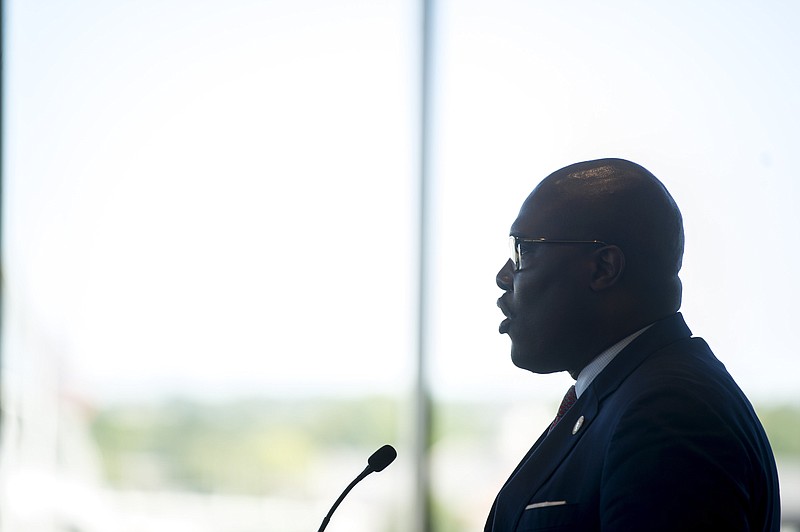 Little Rock officials are poised to redraw the boundaries of the city board's seven wards within the next couple of months based on new population data from the U.S. Census Bureau.

In addition to its seven ward-specific representatives, the 10-member Little Rock board includes three at-large representatives who are elected citywide.

Mayor Frank Scott Jr. recently wrote to board members to inform them of his proposed timeline for the process as well as his priorities for redistricting.

"The delays in the US Census created by the pandemic has impacted the process of redrawing our ward boundaries for the coming decade," Scott wrote in an Oct. 4 email. "The City's official data for us to employ in the redistricting process has been released allowing that process to finally move forward."

The new total population means approximately 28,950 individuals should reside in each ward, Scott wrote, and the new data "will provide details on how the current ward boundaries should be redrawn to account for deviations created by population shifts across the last decade."

The mayor went on to list principles which he said ought to guide the redistricting process.

Scott listed first and foremost "the legal requirements for redistricting ('one person, one vote,' compact and contiguous wards, respect for communities of interest, and the relevant provisions of the Voting Rights Act)."

Second, Scott said officials must provide opportunities for public input and a transparent process to ensure residents feel the work has been done fairly.

Third, Scott took aim at Interstate 630, which runs east-west across much of Little Rock and roughly bisects the city into northern and southern halves.

He wrote, "We must eliminate I-630 as a dividing line in our community with an eye to crossing that barrier for wards through the heart of the City," he wrote.

Finally, Scott wrote, "To the greatest degree possible, we should avoid wards that are overwhelmingly single-race in their composition to enhance unity in our representation process."

The mayor told city directors that he and City Manager Bruce Moore would meet with them individually and simultaneously provide opportunities for public input.

Scott wrote it was his intent to present the redistricting plan to the board and public by Dec. 7 with a vote on the final maps to take place Dec. 14.

In response to questions, city spokesman Spencer Watson wrote that adoption of the new boundaries will require a two-thirds majority vote by the board.

In his email to board members earlier this month, Scott provided a map showing each ward overlaid with its new population figure.

Northwest Little Rock's Ward 5, with 33,914 residents, has the largest population among the seven wards as of the 2020 census, according to the map.

As a result, the boundaries of the ward can be expected to shrink in order to cede population to neighboring districts.

The second-largest ward by population, according to the new data, is nearby Ward 6, with 31,111 residents.

Two wards which can be expected to grow in terms of their geographic boundaries to account for population differences are located in east and southeast Little Rock.

Ward 1, which encompasses the downtown core and the city's eastern edge along the Arkansas River, as well as communities south of I-630, currently has a population of 24,721.

The Ward 1 position is vacant at the moment because of the recent death of former City Director Erma Hendrix, but city directors are scheduled to appoint a replacement this week.

Likewise, Ward 2, which includes some of south-central Little Rock as well as a narrow strip of land that reaches up to touch I-630, has 26,535 residents, putting it under the target population of roughly 29,000.

When reached by phone Monday, Vice Mayor Lance Hines, who represents Ward 5, argued that the board has the authority to drive redistricting despite signals from the mayor that his office intends to take the lead.

"It's pretty clear that the governing board sets the parameters of the redistricting," he said. "And I'm happy to have the mayor's input, but he is not going to be the one driving this process -- the Board of Directors is."

State law says the governing body -- the city board, in the case of Little Rock -- in cities with a management form of government must reapportion wards after each federal decennial census to account for a substantial change in the population of districts or wards from the previous census, according to information provided by Little Rock City Attorney Tom Carpenter.

With regard to the mayor's priorities listed in the Oct. 4 email, Hines argued that the city already has two wards that cross I-630 -- Ward 6 and Ward 1 -- adding that he did not see why "that has to be a driving force; there's nothing in the state law or Voting Rights Act that says we have to do it."

As for avoiding wards that are overwhelmingly single-race in their composition, Hines said "we don't have any wards like that."

In the two wards which he suggested were the two most racially distinct in terms of their populations of Black and white residents -- Ward 1 and Ward 5 -- Hines said that "even there, they have diversity that matches the state as a whole."

Asked if the boundary changes are likely to cause a fight or tug-of-war among board members, who are frequently at odds with one another on certain issues, Hines said, "I only expect it to be a fight if the mayor is trying to drive this process and not the board."

He added, "I think the Board of Directors can agree on maps much like we did 10 years ago when I got on the board for the first time and 20 years ago before that."