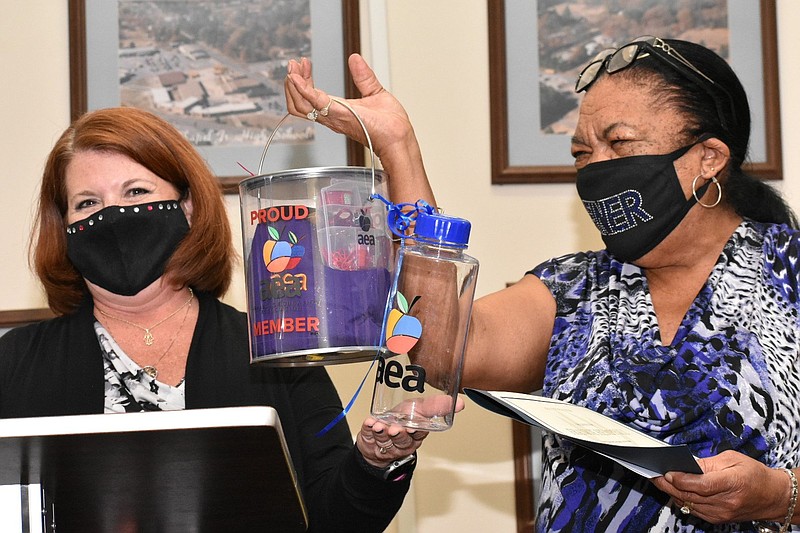 Hemphill received a certificate, along with AEA-branded goodies, in recognition of her recruiting the most members in Zone 2 of the teacher association. The zone is one of six within the AEA and reaches as far as West Memphis, Paragould, Mountain Home and Helena-West Helena, according to AEA President Carol Fleming.

"We were looking to see if we could grow our membership, because, again, we've been around since 1869, and we want to continue to be around and we know covid has brought some early retirement, so to say, for some of our educators," Fleming said.

Hemphill is the chairwoman of the Watson Chapel district's personnel policy committee and delivers a report to the board at each board meeting.

"Were your surprised?" district Superintendent Andrew Curry asked Hemphill, who responded in the affirmative. "You know, we knew about this for two weeks."

"You didn't tell me anything," Hemphill said, drawing laughs.

Micah plays basketball in UPward, participated in the STEM program at the University of Arkansas at Pine Bluff and is a member of St. Paul Missionary Baptist Church. His teacher, Ora Reynolds, recommended him to participate in Explore STEM, a National Youth Leadership Forum.

"The only thing I want to say is, last year, I was virtual, and it was my first year in Watson Chapel," Micah said. "Being that we're in person this year, it was like new to me, and I'm like the shy person. All I want to say is, thank you."

IN OTHER DISTRICT BUSINESS

Assistant Superintendent LaDonna Spain and campus principals gave an annual report to the public before the start of the board meeting.

Spain reported all state requirements for accreditation have been met and nearly half of the absences among teachers and students have been reduced compared with last year.

During the board meeting, Curry reported that the certified staff has accumulated 275 absences at this point in the calendar, compared with 465 this time last year.

The district board approved Curry's request to increase pay for substitute teachers from $88 per day to $100 per day.

"Right now, we're sitting right at minimum wage, and this would put us a little higher than everyone else in our region as far as substitutes go," Curry said. "I believe it would allow us to become a much more attractive place for folks to come to work and substitute."

Gloria Martin-Berry was hired as a secondary teacher.