Educator learns of designation during surprise ceremony by Cynthia Howell | October 14, 2021 at 7:09 a.m. 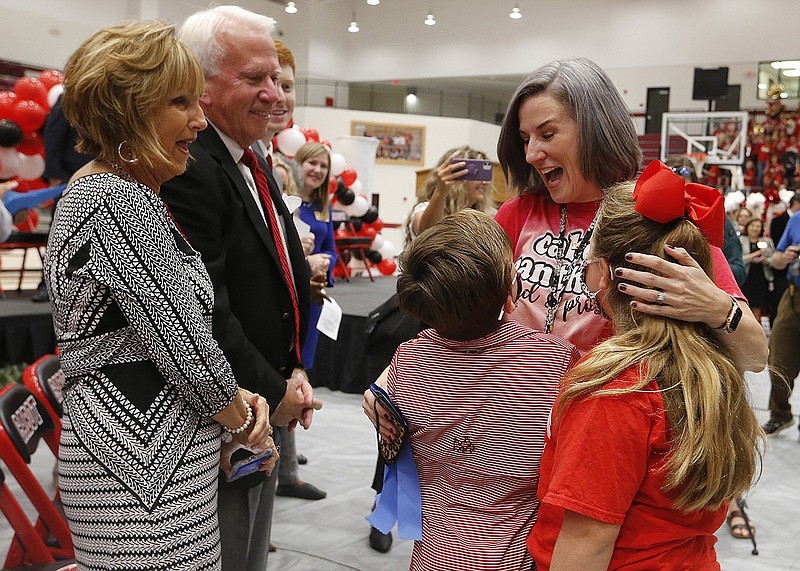 Jessica Saum gets a hug from her kids, Tucker, 9, and Maggie, 8, as parents Jeff and Linda Wheeler look on after Saum was named the 2022 Arkansas Teacher of the Year on Wednesday in Cabot. More photos at www.arkansasonline.com/1013saum/. (Arkansas Democrat-Gazette/Thomas Metthe)

CABOT -- Jessica Saum, a teacher of special needs pupils at Stagecoach Elementary School in Cabot, was named Arkansas' Teacher of the Year for 2022 at a surprise ceremony Wednesday.

The 38-year-old native of Columbia, S.C., was cited for her innovation in exposing her pupils to a wide range of opportunities, and for her advocacy for improved resources and support for military families as they make frequent moves into new states and into new schools.

"This is just the honor of a life time," Saum said after the announcement. "And the opportunities it is going to provide for me to be a voice for Cabot, for Arkansas ... for my students and for the military community, I am filled with so much joy and so much appreciation for everyone who has helped me get to this point."

Saum, who has been teaching up to 15 children a year in self-contained special education classrooms at Stagecoach since 2018, will now compete for National Teacher of the Year honors.

She will also receive a one-year leave of absence from her Cabot job starting in July to serve as a teacher ambassador for the Arkansas Department of Education and as an ex-officio member of the state Board of Education.

Gallery: 2022 Arkansas Teacher of the Year

In addition to the $2,000 she has won for being one of 12 regional finalists in the Teacher of the Year competition and one of four semi-finalists for the state honor, she will receive $14,000 for the singular honor -- all provided by the Walton Family Foundation of Bentonville.

Saum said Wednesday that she will likely use a portion of the prize money for a holiday trip to the Azores islands of Portugal with her children, Tucker, 9, and Maggie, 8, to visit her husband, U.S. Air Force Lt. Col. Shane Saum, who is stationed there for a year.

Saum's Cabot School District colleagues and Arkansas Department of Education staff organized a schoolwide reading rally centered on the book, "Charlotte's Web," as the pretense for the Teacher of the Year announcement.

At that event, five teachers, including Saum, were selected by television meteorologist and master of ceremonies Tom Brannon to be blindfolded. Each teacher was handed an object related to the story and asked to guess what it was as the pupils seated in the Cabot High School arena cheered and a crowd of dignitaries -- including Saum's parents and Arkansas Education Secretary Johnny Key -- swept into the arena.

Saum, holding a blue first-place medallion and ribbon, was the last to guess. As she did so correctly, Brannon called on "Johnny" to announce her prize. As she took off the blindfold she was greeted with Key's shout, "Jessica Saum, you are Arkansas' Teacher of the Year!"

Key described for the crowd Saum's "fantastic impact" on her students and those beyond her classroom.

Creating an outdoor classroom for use by all of Stagecoach Elementary, the raising of $1,000 to purchase playground equipment, and the partnering with Ballet Arkansas to have a costumed Sugar Plum Fairy ballerina read "The Nutcracker" to pupils were among Saum's projects.

Still another was partnering with the Little Rock Air Force Base to give pupils a virtual online flight on a C-130 airplane.

Hutchinson noted that Saum knows firsthand the difficulty military families have in their frequent transitions to new schools.

"Mrs. Saum brings a unique perspective to her students, her schools and now to the entire state," Hutchinson said.

Susanna Post, the state's 2021 Teacher of the Year from Fort Smith, spoke on behalf of previous state award winners, telling Saum that she has joined a family of teacher honorees. Post said Saum's work in the classroom stood out because of the joy Saum displays despite the challenges of the covid-19 pandemic.

"She is just an innovative, upbeat, all-for-kids kind of person. She expects her kids to rise and grow, and under her guidance, there is no limitation," Gairhan said.

Saum said she is motivated by the thought that every child deserves what is best and an opportunity to succeed.

"And every child deserves us to expect them to do great things," she said. "When we expect them to do those great things, they rise to those expectations. And, if we provide them with great opportunities and they didn't reach that level, OK, that's far less dangerous than assuming that they can't do something and never giving them the opportunity."

As the state Teacher of the Year and candidate for the national honor, Saum said she would like to push for inclusion opportunities for students with special needs because that is how she believes they learn best.

"We need opportunities for children to be with their typical grade-level peers as much as possible," she said.

She also said she would like to continue to partner with the leadership at the Little Rock Air Force Base to serve military families, and to connect with U.S. first lady Jill Biden, who is an advocate for military families and for education.

Saum has a 2011 bachelor's degree in early childhood preschool to fourth-grade general and special education from Arkansas State University. She and her husband left Arkansas for Germany where she was a para-professional for a student, and she stayed home with her newborn children. During that time she also earned a master's degree in grade-four-through-12 special education from ASU.

When the Saums returned to Arkansas in 2016, Saum worked as a part-time early childhood interventionist for the Pulaski County Special School District and then as a preschool teacher at Jacksonville/North Pulaski's former Arnold Drive Elementary School. She then began working in the Cabot district.

The granddaughter of a longtime kindergarten teacher, Saum was one of four teachers named in August as state semifinalists for the 2022 Arkansas Teacher of the Year at a ceremony at the Governor's Mansion. 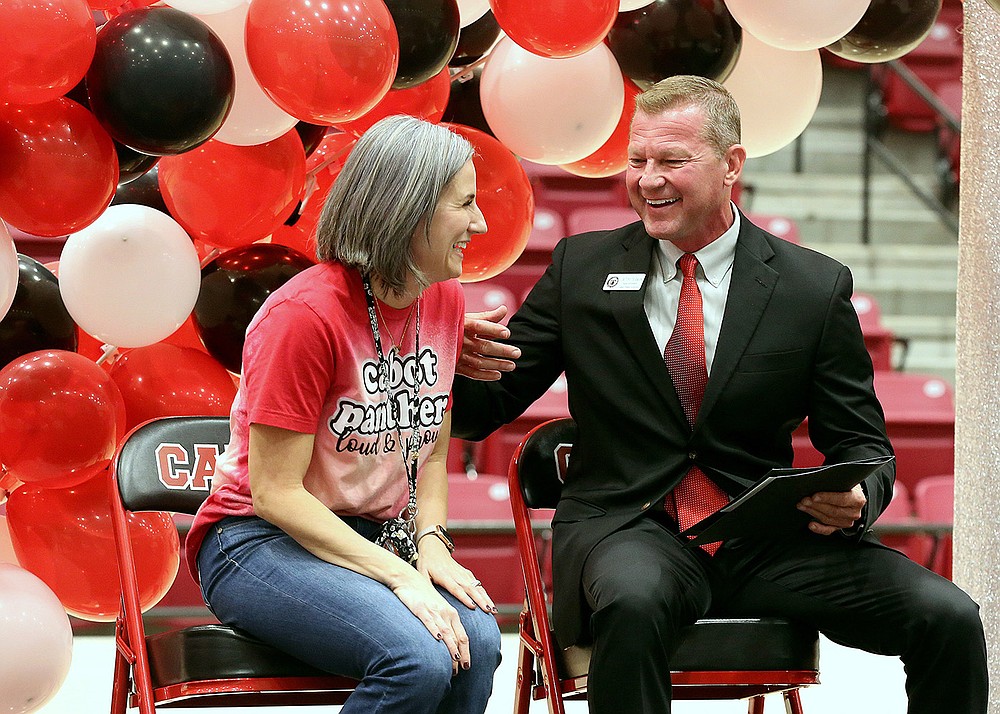