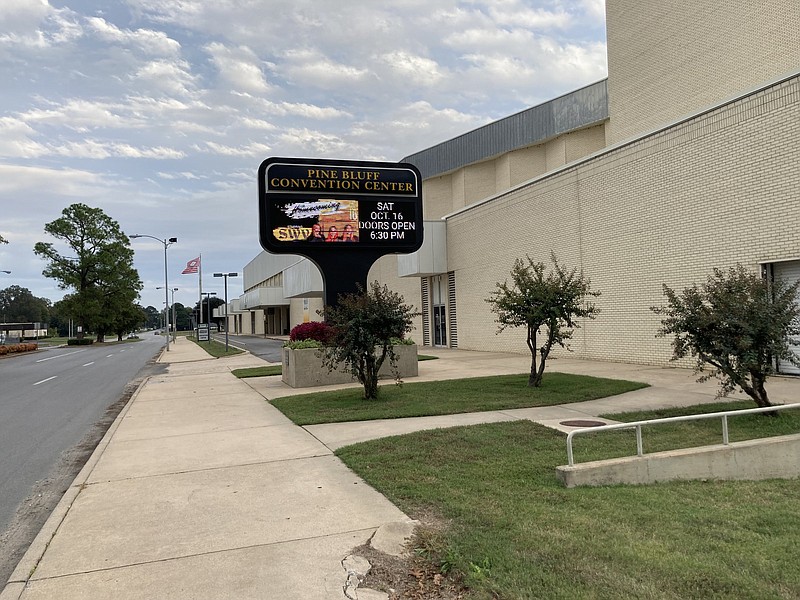 A concert on Saturday night at the Pine Bluff Convention Center caps a week of homecoming activities at UAPB. (Pine Bluff Commercial/Byron Tate)

After all of the Saturday morning homecoming festivities on Main Street, the tailgate parties and the final touchdown of the UAPB football game, hundreds of concertgoers will enjoy some rhythm and blues music at the Pine Bluff Convention Center.

Pine Bluff Convention Center Executive Director Joseph McCorvey said he is excited to bring homecoming concerts back to Pine Bluff -- a tradition that started years ago, but fell off and had a bad reputation.

"When I first took this job three years ago running the Pine Bluff Convention Center, people had been telling me during homecoming [that] promoters weren't fulfilling their obligations when it came to homecoming concerts," said McCorvey.

According to McCorvey, a lot of concerts were canceled. The reason, he said, was that artists had contracts that stated they were to be paid in advance. But because they never received their funds, they didn't come.

In other instances, McCorvey said, promoters would advertise one artist but bring in a different artist that the public did not pay to see perform.

"My thought was trying to bring back these concerts to Pine Bluff and to enhance the homecoming week of UAPB by doing a concert," he said. "I'm hoping that based on how this one goes that we can have a professional national act come in and do a homecoming concert every year moving forward. That's my hope."

Saturday's concert is sponsored by Saracen Casino and will include R&B legends Eric Benet and Sisters With Voices, better known as SWV.

Both acts will be performing all of their hits.

Benet, a recording artist, songwriter, actor and philanthropist is a four-time Grammy-nominated singer and songwriter with hits, "Spend My Life With You," "Sometimes I Cry" and "Real Love."

Atlanta comedian and Season 3 winner of "Who Got Jokes" Lav Luv will host the concert that has been promoted to be filled with laughter and entertainment.

Lav Luv has opened for the Isley Brothers, the Four Tops, the Temptations and Ashanti. He has toured with major comedians like Chris Tucker and Jamie Foxx.

McCorvey advises people to get tickets now, saying that waiting until the last minute will risk being in a long line and a long wait to get in.

Tickets can be purchased online at itickets.com or at the Pine Bluff Convention Center box office today until 4 p.m.

According to McCorvey, nearly 1,000 tickets have already been sold with a maximum capacity of 2,000 in the auditorium where the concert will be held.

"A lot of people are purchasing these tickets from other states," said McCorvey, who added that purchases have come from people from Dallas, St. Louis and even as far as Pennsylvania.

"We are following the guidelines set by the Arkansas Department of Health and the CDC regarding building cleaning and disinfection procedures including constant cleaning during the event," he said.

He also said the bathrooms are hands-free, and concertgoers' temperatures will be taken upon entry.

Besides Forward Fest that was held this summer, the homecoming concert is expected to draw hundreds of visitors from out of town, boosting revenue throughout the city.

"This will enhance tourism dollars," said McCorvey, who pointed out that area hotels were already sold out. "People will be spending money in our restaurants, with local vendors, and our hotels, which support the convention center through the hamburger tax and the hotel tax."

"Seeing the potential of getting that hotel will be great for the city," said McCorvey. "It will also give our artists a place to stay because right now they have to stay in Little Rock. They should be staying here."

Nevertheless, McCorvey is excited about the concert and the future of the Pine Bluff Convention Center.

"For homecoming this is a great ending to the week of celebration of a historically black college. I want it to continue to be big and become an annual event that people look forward to," McCorvey said, adding that he hopes the partnership with Saracen Casino continues and that UAPB becomes a partner, as well. "When we have an event at the Pine Bluff Convention Center and has our logo on it -- you don't have to worry if it's going to happen. It's going to happen."