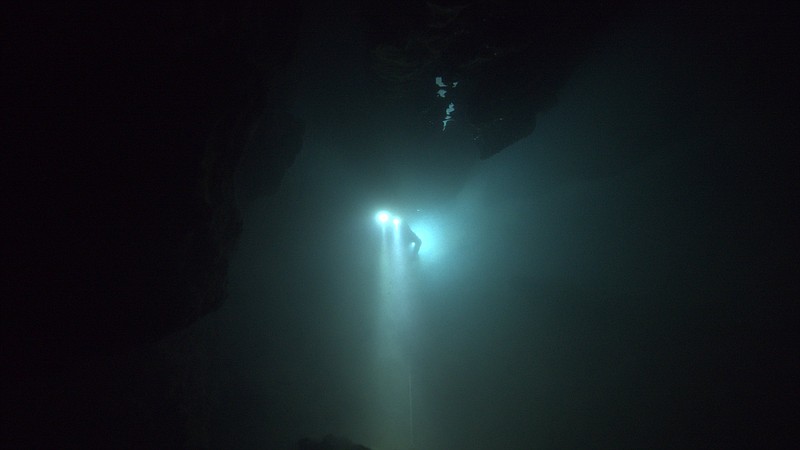 Night and Fog: A Thai Navy SEAL diver navigates through an underwater cave in the harrowing National Geographic documentary “The Rescue,” about the heroic extrication of a boys soccer team trapped in an underground cave in 2018.

The folks in Hollywood are probably wise not to listen to critics. A lot of stuff we like is old, subtitled and about subjects that don't sell toys. I once persuaded an arthouse theater owner to show a movie I loved called "Last Resort," made by an up-and-coming Polish director named Pawel Pawlikowski. While the filmmaker later earned an Oscar nomination for directing "Cold War," nobody went to see "Last Resort."

Nonetheless, I'd like to request that any aspiring filmmaker who knows anything about the 2018 rescue of a boys soccer team and their coach in rural Thailand find something else to film. It's unlikely your tale with have the narrative power or cinematic finesse of Elizabeth Chai Vasarhelyi and Jimmy Chin's new documentary of the event.

The married directors won an Oscar for "Free Solo," and their new movie has the suspense of an Alfred Hitchcock masterpiece even though most people know how the rescue attempt went. If anything, Vasarhelyi and Chin reveal how slim the lads' chance of survival was.

Even William Goldman or France Marion might have trouble coming up with stakes bigger than the ones Vasarhelyi and Chin explore here. In June of that year, a simple birthday party turned into a crisis because a normally safe trip to a cave trapped the entire team. Flooding made getting out of the more than a mile of underground tunnels nearly impossible.

Nobody knew where the boys were, and even though the Thai SEALs are as brave and ingenious as their American counterparts, none was used to diving in caves.

That's an activity so specialized that only a handful of people know how to do it. Brits Rick Stanton and John Volanthen have made custom gear that allows them to dive through the narrow tunnels. You can't buy their breathing systems in a store. If one of their peers dies on a trip, the two of them are probably the only ones who have the skills to retrieve the bodies.

When they do discover that the lads have survived the pre-monsoon flooding, the divers' challenge becomes even more intimidating. They also encounter a group of grown utility workers who were also trapped there, and the grown men panic during the short trip back to safety.

Getting kids back safely is infinitely more difficult.

The plan to get them through the tunnels involves several "don't try this at home" techniques that could have resulted in severe legal punishment if the mission failed.

You really don't get a sense of how difficult the operation was without seeing the film. The diving sequences are re-created, but it's about the only way to get a sense of how narrow the passages were and how hard it was for the SEALs, divers and others to see what was happening.

While it was probably tempting to lionize the divers, particularly Australian Richard Harris, who's also a moonlighting doctor, the film reveals that thousands of people helped get the boys and the coach out of the cave. In a feat of engineering that rivals Hoover Dam, the Thais were able to redirect a seemingly endless amount of water, which gave the crews just enough of a chance to succeed.

Because monsoon season was around the corner, there was already a ticking clock, but the amount of breathable oxygen in the cave was rapidly dwindling, and another flood would have made the mission pointless. You can't create more dire stakes than that.

The film features several breathtaking sequences shot by the Thai SEALs, using GoPro cameras. The directors also include candid interviews with Thai officials, the divers, and other participants. The cave explorers admit their activity is geeky but understandably take pride in being the right people to help.

Because we can get into the participants heads and see what they saw at the time, it's as if we are experiencing it with them. This balance between the emotions and the hard evidence of the incident obviously took Vasarhelyi and Chin serious effort. Instead of making a crummy drama, perhaps the people in Tinseltown can simply marvel at what these two have accomplished.

89 Cast: Documentary with Rick Stanton, Richard Harris, John Volanthen, and a bunch of real-life heroes from the U.S. military and Thai Navy SEALs.

Rating: PG for thematic material involving peril and some language