The world in brief: Greek workers' bus drops into sinkhole 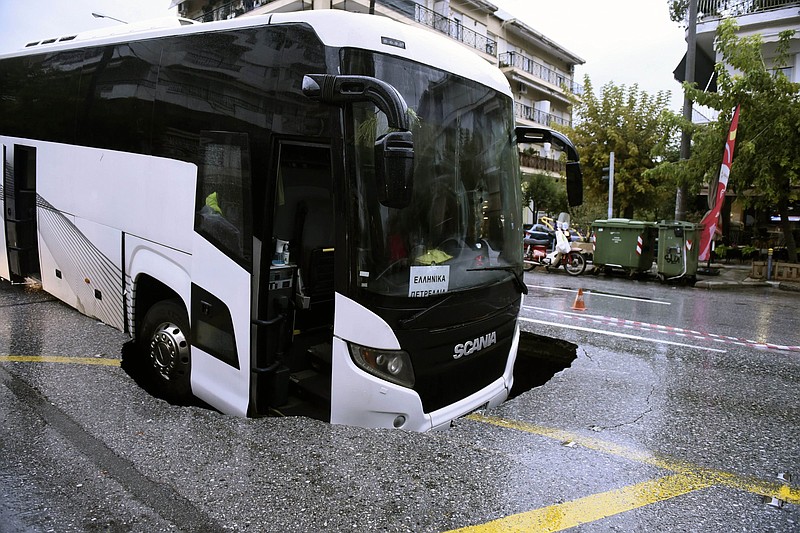 A bus is stuck in a sinkhole Friday in Thessaloniki, Greece, where rainstorms have damaged roads, closed schools and left at least two people dead. (AP/Giannis Papanikos)

THESSALONIKI, Greece -- A bus transporting oil refinery workers fell into a sinkhole in the center of Greece's second-largest city Friday as storms continued to batter the country, damaging roads, closing schools and causing the deaths of at least two people.

Authorities said all 15 people on the bus in Thessaloniki were unharmed. The incident occurred early Friday as the refinery employees were heading to work. The front of the bus initially partially tipped into the hole, allowing people on board to escape through the rear door. The empty vehicle later fell deeper into the hole before a crane removed it.

Hundreds of homes in Athens, Greece's capital, were flooded, and major roads remained closed as the storm crossed the country, heading east.

Flooding killed one person on the Greek island of Evia, where the severe weather compounded damage from an August wildfire. Torrential rain was also blamed for a traffic accident in Greece's southern Peloponnese region that left one woman dead and several people injured.

MADRID -- Spain's National Court consented Friday to the extradition to the United States of ex-Venezuelan leader Hugo Chavez's former nurse, who is charged in Miami with money laundering.

The court's magistrates "consider that all requirements are met" for the extradition of Claudia Diaz to proceed, the court said in a statement.

The court rejected Diaz's arguments against extradition that she is being investigated in Spain on the same charges and that she obtained Spanish nationality last April.

The magistrates ruled that the Spanish investigation does not cover the same allegations, saying the U.S. investigation is much broader and that factors that might prevent extradition of a Spaniard are not in question.

Diaz and her husband, Adrian Velasquez, a former security adviser to Chavez, have been living in Madrid, where they were briefly arrested in 2018 on a Venezuelan warrant. But Spain's supreme court rejected Venezuela's extradition request, finding the couple could be tortured if they returned home.

A Miami federal court has accused Diaz of taking bribes from a billionaire media mogul to greenlight lucrative currency transactions when she served as Venezuela's national treasurer.

She and her husband are accused of taking at least $4.2 million in furtherance of the bribery scheme, according to the charges presented last October. The payments came from companies and bank accounts located in Switzerland to the couple's accounts in Miami.

NAIROBI, Kenya -- Police in Kenya say a man who had confessed to killing a dozen children and escaped from detention this week has been killed by a mob.

Area Assistant County Commissioner Cornelius Nyaribai confirmed the killing of Masten Wanjala on Thursday. The killing near his home in Bungoma county came a day after he escaped from police cells in Nairobi.

Police authorities said Wanjala was identified after he joined a football match and played with locals. Some then trailed him and beat him to death.

"The law of the jungle as applied by irate villagers prevailed," Kenyan police's Directorate of Criminal Investigations said in a tweet Friday.

Authorities have said Wanjala had confessed to killing 12 children in Nairobi and Machakos and Bungoma counties when he was arrested in July.

So far, five bodies have been recovered.

Nigeria to get back plundered artifact

LONDON -- A Cambridge University college said Friday that it would return a looted bronze cockerel to Nigeria later this month, making it the first U.K. institution to hand back one of the artifacts known as the Benin Bronzes.

Jesus College announced in 2019 that it would return the Okukor, a statue that was taken from the Court of Benin in what is now Nigeria. British colonial forces took the artwork in 1897, and it was given to the college in 1905.

The college removed it from public view in 2016 after students protested, saying it represented a colonial narrative. The college set up a working group to examine the legacy of slavery, and the group concluded that the statue "belongs with the current Oba at the Court of Benin."

The Oba of Benin is head of the historic Eweka dynasty of the Benin Empire, centered on Benin City in modern-day Nigeria.

The college said Friday that it will hand over the statue to Nigeria's National Commission for Museums and Monuments in a ceremony at Cambridge on Oct. 27.

His Royal Majesty, Oba of Benin, Omo N'Oba N'Edo Uku Akpolokpolo, Ewuare II, said he was "indeed very pleased and commend Jesus College for taking this lead in making restitution for the plunder that occurred in Benin in 1897."

Thousands of artifacts were looted after British imperial troops occupied Benin City in 1897.

Hundreds of bronzes ended up in the British Museum in London, and hundreds more were sold to other collections such as the Ethnological Museum in Berlin. 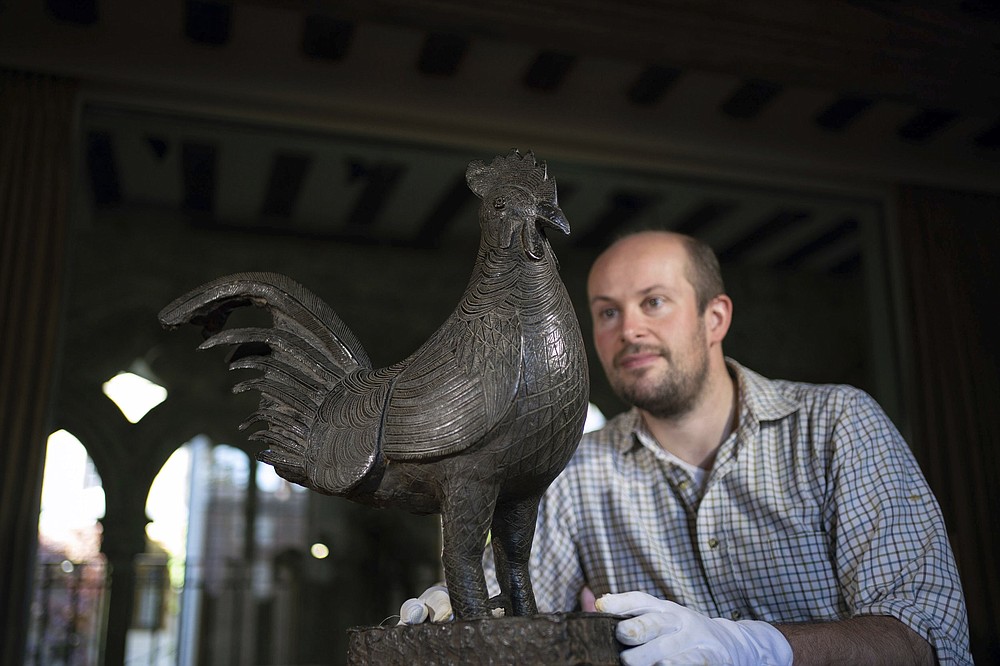 Archivist Robert Athol examines one of the Benin Bronzes, a statue of a cockerel called The Okukor, at England’s University of Cambridge on Friday. (AP/PA/Joe Giddens)