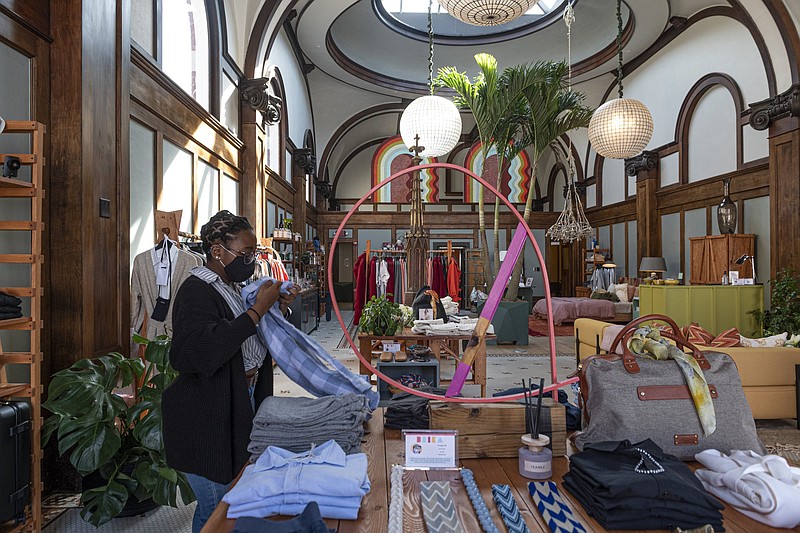 Elisabeth Lewis work to spruce up the showroom of BRIKA, a new store that opens up in September of the Bentonville Square. Go to nwaonline.com/211013Daily/ to see more photos from around Northwest Arkansas. (NWA Democrat-Gazette/Spencer Tirey)

Toronto-based BRIKA opened the location Sept. 14 in the historic bank building at 115 W. Central Ave., a block west of the square. Plans call for the store to remain there through August.

BRIKA, founded in 2012 by Jen Lee Koss, has about 90 locations in Canada. The Bentonville store is only its third in the U.S., store manager Lindsey Fuller said. The other two are in Aspen, Colo., and the Hudson Valley in New York state.

The Bentonville location sells clothing, accessories, jewelry, children’s clothes, beauty and wellness products, books, culinary brands and items for the home. The store is staffed by Fuller and four other employees.

Fuller said the name BRIKA was derived from the Latin word fabrica, which means craft or art, according to the Oxford Latin Dictionary.

“That’s what we pride ourselves on — giving emerging artists and designers a physical space in which to sell their products,” Fuller said.

More than 50 vendors, including about 10 in Northwest Arkansas, stock the 2,000-square-foot Benton-ville location, Fuller said. And calls are constantly coming in from other area artists and artisans who want to get their wares on the store’s shelves, she said.

BRIKA is always looking for new vendors, Fuller said, and its merchandise will rotate throughout the year. Local vendors currently represented in the store include ceramic artist and jewelry maker Ray Hopwood, as well as Two Friends, Pink House Alchemy and Rift.

New York designer — and Arkansas native — Ryan Lawson created an eclectic interior that blends contemporary style with the building’s Edwardian-era architecture. He placed colorful furniture and fixtures against a neutral background that keeps the focus on the merchandise.

“We view these types of attractive retail additions, though temporary, as a win-win situation,” Heath said. “When a new space draws attention and additional foot traffic to our downtown, it benefits everyone — retailers, restaurants and our city.” Heath said the store not only brings more dollars to the city, “but it’s also a colorful, creative store that is a welcome addition to the many diverse, creative shops, restaurants, and public spaces” in downtown Bentonville.

Olivia and Tom Walton, whose many business ventures have contributed to the growth of Bentonville and its thriving downtown, said in a statement that they welcomed the addition of BRIKA.

“Bringing together modern retail in a historic building is going to add yet another dimension to downtown Bentonville’s charm,” the couple said. “Businesses like it are key to the vitality and success of downtowns all across the region.” According to the book “Sentinels of History: Reflections on Arkansas Properties on the National Register of Historic Places,” edited by Mark K. Christ and Cathryn H. Slater, the building opened in 1906 as the Benton County National Bank.

Rogers architect A.O. Clark designed the building in the Classical Revival style. Four granite columns hold up a portico in front. Small tiles form a mosaic pattern on the floor, and rich woodwork frames the interior’s arched windows and ceiling.

The city bought the former bank building in 1934 and used it over the years as office space, a library, municipal court and City Council chambers, according to the Arkansas Democrat-Gazette’s archives.

The building was added to the National Register of Historic Places in 1983.

In April 2019, the city sold the building to Downtown Central LLC, county records show. No purchase amount was immediately available. A business named Downtown Central LLC is registered with the Delaware Department of State, but the department’s records provide no further data.

However, a building permit for alterations and remodeling of the structure was issued on April 19 and valued at $270,000. Blue Crane LLC, the real estate arm of Tom Walton and Steuart Walton’s Runway Group LLC, was the contractor.

The Walton brothers are among the second-generation heirs to Walmart Inc. founder Sam Walton’s fortune.