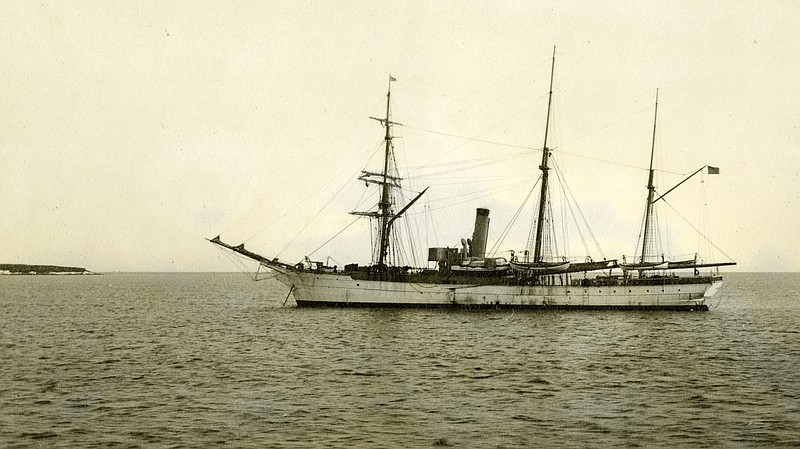 BOSTON -- The wreck of a storied military ship that served in two world wars, carried out patrols in waters off Alaska for decades, and at one point was captained by the first Black man to command a U.S. government vessel has been found, the Coast Guard said Thursday.

A wreck thought to be the U.S. Revenue Cutter Bear, which sank in 1963 about 260 miles east of Boston as it was being towed to Philadelphia to be converted into a floating restaurant, was located in 2019.

But it was only in August that a team of experts looking at the evidence came to the conclusion that they are "reasonably certain" that the wreck is indeed the Bear, officials of the Coast Guard and National Oceanic and Atmospheric Administration said at a waterfront news conference in Boston.

"At the time of the loss of Bear, it was already recognized as a historic ship," said Joe Hoyt, of the Office of National Marine Sanctuaries.

The legend of the ship is so ingrained in Coast Guard lore that the sports teams at the U.S. Coast Guard Academy in Connecticut are named the Bears, partly in honor of the vessel.

Built in 1874, the steam and sail-powered Bear was purchased by the government in 1884 to take part in the search for the ill-fated Arctic expedition led by Lt. Adolphus Greely, a member of the U.S. Army's Signal Corps.

The U.S. Revenue Cutter Service merged with the U.S. Life-Saving Service in 1915 to form the Coast Guard.

"During Bear's 40-year career in Alaska, the cutter performed some of the most daring and successful Arctic rescues in history," said William Thiesen, the Coast Guard Atlantic Area's official historian. "And when malnourished Native Americans needed food, Bear brought it. When stranded whalers needed rescue, Bear saved them. One hundred years ago when thousands of Alaskans contracted the Spanish flu during the pandemic, Bear brought doctors and medicine."

Thursday's announcement coincided with the arrival in Boston of the U.S. Coast Guard Cutter Healy, named after the Bear's captain from 1886 until 1895, Michael "Hell Roaring Mike" Healy.

The Healy, an icebreaker commissioned in 1999, recently completed a transit of the Arctic Northwest Passage.

Healy, born in 1839, was the son of a Georgia plantation owner and a slave. Healy's father sent him to Massachusetts to escape enslavement, Thiesen said.

He likened Healy -- commissioned by Abraham Lincoln a month before the president's assassination -- to an Old West sheriff, whose jurisdiction was an area the size of the lower 48 states.

"While he never, during his lifetime, self-identified as African American, perhaps to avoid the prejudice he would likely have encountered in his personal life and career, he was in reality the first person of African American descent to command a ship of the U.S. Government," a NOAA news release said.

Even after its time in the Arctic was over, Bear's career continued.

Between the wars, the Bear was repurposed as a maritime museum by the city of Oakland, Calif.; used as a movie set; and purchased by Adm. Richard Byrd for use in his Antarctic expeditions.

The ship was decommissioned in 1944 and remained in Nova Scotia until its trip to Philadelphia ended prematurely in 1963 about 90 miles south of Cape Sable, Nova Scotia, according to NOAA.

"Bear had served in various capacities for nearly 90 years, a remarkable record for a ship built of wood," Thiesen said.