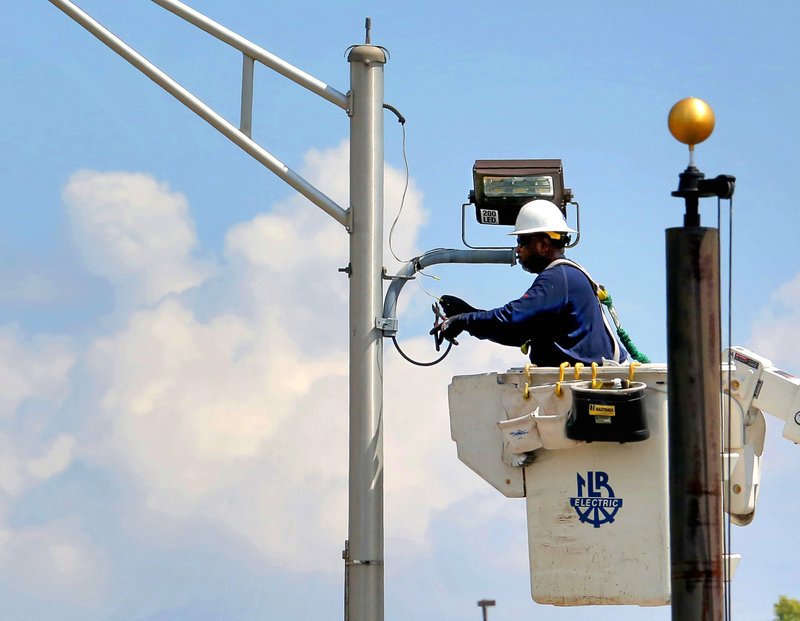 News that a crew of lineman from the North Little Rock Electric Department turned in their resignation notices hours before came at the tail end of last Monday night's council meeting.

As Mayor Terry Hartwick was winding down the meeting with announcements about the city's upcoming Christmas tree lighting ceremony and open house for the new Justice Center, he said he had one more thing to add: "We're losing lineman."

Scott Springer, the director of the North Little Rock Electric Department, then walked up to the podium to report four linemen -- an entire crew -- handed in their resignation notices earlier that day.

"It's very concerning and it's getting to a critical point -- now, as of today," Springer said.

With an increase in demand and a general shortage of trade workers, linemen, the skilled workers who climb poles and make repairs on high-voltage wires, are in short supply.

Some of the increase in demand is from more people working from home putting more pressure on utilities to upgrade the grid to meet the need combined with a lack of available experienced linemen, a utility spokesperson said.

Representatives from Arkansas utilities also said many of their linemen have left for contract work in California, where the pay can be substantial, as wildfires have damaged much of the state's sprawling electric grid.

Some attribute strains put on the electric grid caused by recent weather such as the historic February snowstorm, when Entergy and other utilities asked customers to conserve power.

Many Arkansas lineman also made the trip south in August and September after Hurricane Ida struck the Louisiana Gulf Coast, leaving more than a million people without power.

Some also point to the baby boomer generation of linemen retiring and a difficulty recruiting college-minded millennials and members of Gen Z to become apprentices.

"Folks, we have contractors and other utilities contact our men almost weekly," Springer told the council.

Down a full crew, the North Little Rock Electric Department, the largest municipal electric utility in the state, is down to just three crews. Contractors can fill the gaps, but often the costs can be high, especially if they have to come from out of state, Springer said.

Monday's resignation of four linemen isn't the most the department has had leave in a short time-span, Springer said, saying nine linemen left the department within a month in 2019.

"It's a dog-eat-dog world out there right now," Springer said.

The utility still has about 350 linemen on staff, but the company does feel pressed to recruit more lineman as demand for service increases, Hinkle said

"There is so much work going on in the industry," Hinkle said. "A lot of modernizing of the gird, reliability improvement projects. There's more work so we need more workers."

"It means we are unable to complete jobs, you know, in a timely fashion," Oliver said. "A lot of times we're a little bit late. It means we have a larger backlog of work to get done because we can't get to it. And ultimately for us, it means a decline in revenue as well."

Since linemen have become an increasingly rare commodity, finding them has become harder, so contractors and utilities look to poach them from others to fill their labor shortages.

"I hate to say it, but we're probably going to be robbing linemen from somebody else," Springer said. "So it's kind of a vicious circle, it just keeps on growing."

Representatives from North Little Rock and Entergy, which has customers in four states, said larger companies offering higher wages have poached their workers.

Springer said it was harder for a municipal utility like North Little Rock to compete with some contractors, while Hinkle said Entergy has also lost lineman seeking higher pay elsewhere.

"Basically, there are none of them out walking the streets," Springer said. "If you want to hire journeymen linemen you just got to go get one from somebody else that's got one."

William French, business manager for the International Brotherhood of Electrical Workers Local 295 in Little Rock, said a decision for a lineman to leave his job goes beyond just increased pay. It could also be about poor working conditions and bad management.

"The people are having shortages are paying crap and their working conditions suck," he said.

For North Little Rock, the recruiting issue extends beyond lineman, as the city had 16 job openings as of Friday.

While North Little Rock Human Resources Director Betty Anderson told the council Monday night the city was in the process of filling several positions after a recent job fair, many positions remain hard to recruit for.

Even before four linemen quit on Monday, the city had a listed opening for a journeyman lineman position, which pays $38.77 an hour, for months with no success.

Springer said the city has discussed running a commercial statewide, advertising the open linemen positions and increasing the hourly wages for the positions. The city has also struggled to hire a tree trimmer and a light equipment operator.

In hopes to attract more young people to the profession, the University of Arkansas Pulaski Tech recently established a program to train linemen. A similar program also exists at Arkansas State University Newport.

In the meantime, North Little Rock's will need to look to contractors to fill the city's need for linemen.