Removing dam would do away with Lake Harrison, restore Crooked Creek 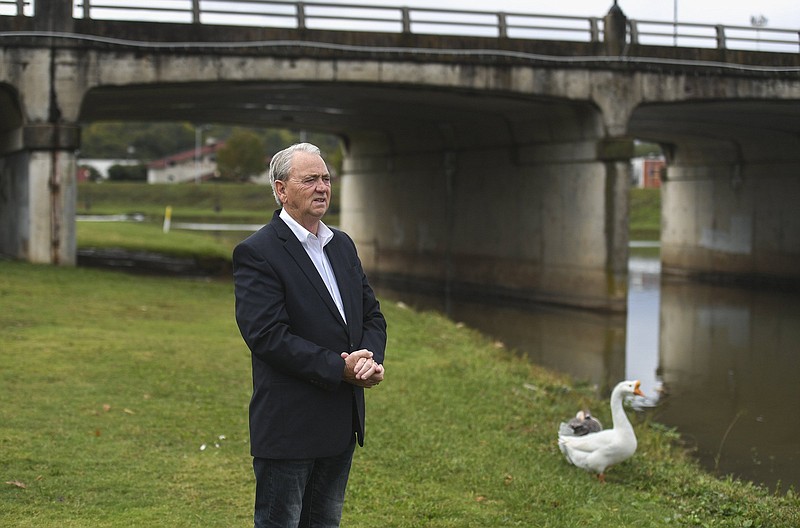 Mayor Jerry Jackson takes pictures of ducks, Friday, October 15, 2021 at Crooked Creek in Harrison. A plan is in the works to remove the low-head dam that created Lake Harrison and restore Crooked Creek to a free-flowing stream through downtown Harrison. Mayor Jerry Jackson and others support the idea of restoring Crooked Creek to its free-flowing nature. A meeting to gather public input will be held on Oct. 26, and the City Council will have the ultimate say. The Arkansas Department of Transportation has offered to pay for the dam removal and restoration of Crooked Creek (at a cost of about $2.2 million). Check out nwaonline.com/211015Daily/ for today's photo gallery. (NWA Democrat-Gazette/Charlie Kaijo)

A plan is in the works to remove a lake alongside downtown Harrison and restore Crooked Creek as a free-flowing stream.

Mayor Jerry Jackson said the Arkansas Department of Transportation has offered to remove a 10-foot-tall weir, or low-head dam, that created Lake Harrison and restore Crooked Creek to something more like the natural state it resembled in 1961. He said that work will cost about $2.2 million.

Also, the Arkansas Game and Fish Commission has offered to provide technical assistance and some funding for stream shaping, Jackson wrote in a column that was posted on the city of Harrison's Government Facebook page and published in the Harrison Daily-Times.

"We can restore Crooked Creek," he wrote. "We can do it safely, and we can afford it. I strongly recommend we take on this project.

"Over the years I have stayed in many small towns that had creeks or rivers running through their downtown area, and these are always the heartbeat of the community."

But first there will be a public meeting at 6:30 p.m., Oct. 26, at the John Paul Hammerschmidt Center on North Arkansas College's South Campus, said Wade Phillips, Harrison's city engineer.

Then the Harrison City Council will decide the fate of Crooked Creek.

Phillips said the public and City Council must be on board for the project to happen.

"There is some concern in the community about taking the weir out and removing the lake," he said. "There are people who do like it. They like the appearance."

"It looks beautiful from a distance," Jackson wrote in his column. "Motorists see the lake from Harrison Hill, sparkling invitingly in the sun, but the closer they come, the less enchanting they find the lake."

That's because of agricultural runoff, stagnant water and goose droppings, he wrote.

"On an ordinary day, the smell coming from the lake warns these visitors to stay out," wrote Jackson.

On that day, in the early morning darkness, "while a tornado-whipped thunderstorm lashed the heavens, a ten-foot wall of water from rain-swollen Crooked Creek roared suddenly through the heart of town killing three persons, demolishing fifteen homes and wiping out or severely crippling 80 per cent of the local business establishments," according to a May 10, 1961, article by Cabell Phillips in the New York Times.

Four people actually died in the 1961 flood, said Ken Reeves, a former chairman of the Arkansas Game & Fish Commission, who was a 13-year-old Harrison boy in 1961.

Reeves said he and his father woke up at about 4:30 that morning with people banging on the door looking for boats to help the flood victims.

"So dad and I went down there," said Reeves. "I watched a '55 Mercury float down Spring Street and float right through the front of Commercial Bank."

Reeves said the floodwater washed houses, trees and school buses down Crooked Creek and right up against the Willow Street bridge, which has since been removed. The high school was located near Crooked Creek.

"These houses came down the creek along with one or two school buses and they lodged against this Willow Street bridge and made a dam," said Reeves. "The creek jumped over the levee."

Reeves said it wasn't much of a levee back then, and there were houses built right along the creek bank at that time.

After the flood, the U.S. Army Corps of Engineers came up with a plan to raise the levees, broaden the stream bed and keep development away from the creek.

"For the next 35 years, it was more a marsh or swamp than a creek," wrote Jackson. "It couldn't flow like a creek through its widened channel."

In the mid-1990s, a weir was installed on Crooked Creek to create Lake Harrison. But that also caused problems.

"The sediment flows in from upstream, piles up against the weir, and fills the bottom layer of the streambed," wrote Jackson.

The thought was that it would be a recreational lake, but it didn't really work out that way, said Phillips.

"You don't see people swimming in it or wading in it," he said.

Phillips said the weir isn't good for fish or the water quality.

The weir was designed so water flows over it when the lake reaches a certain height.

Jackson said weirs can be dangerous.

"The safety issue posed by the weir is serious," he wrote. "Such weirs are known as 'drowning machines.' Water plunging down its downstream face creates a powerful reverse current in the pool at the bottom. A person caught in that current would almost certainly be held under, no matter how strong they are or how desperately they struggle."

Also, the still water lake attracts hundreds of geese to the 8-acre lake.

"Geese are handsome animals, but they are not ideal neighbors," wrote Jackson. "They produce a lot of waste, and they let it fly wherever."

"Sediment rich in agricultural runoff concentrates in Lake Harrison's stagnant pool, and battalions of geese broadcast E. Coli in every direction," he wrote. "Maybe it isn't the best possible place for citizens to meet, for recreation, or for children to play."

Jackson said the city must dredge the silt out of the lake about every three years, at a cost of $300,000.

Sean Saunders, Game & Fish's Stream Team coordinator for the Harrison area, said he and Reeves came up with the idea of removing the weir about four years ago while meeting at the lake to try to figure out how to make Crooked Creek below the dam healthier and more accessible for fishing.

Reeves said it was Saunders who came up with the idea.

"He said, 'What you really need to do is take this weir out,'" remembers Reeves. "He started talking about why and it made good sense."

Installing a dam increases the water temperature, which can be detrimental to some species, said Saunders.

"Across the country there is a big push to do fish-passage barrier removal," he said.

Kayti Ewing, natural resources section head for the Arkansas Department of Transportation's Environmental Division, said they heard about the potential project at a Stream Heritage Partnership meeting, where the Game & Fish Commission was a participant.

The Transportation Department has a job scheduled to replace the Crooked Creek bridge on U.S. 65B over Lake Harrison.

"When we reached out to inquire about the project, in order to ensure that both projects were informed of one another, we were put into contact with the Arkansas Game & Fish Commission Stream Team, which was actively working with the city of Harrison and its consultant," said Ewing.

By doing stream restoration, the Transportation Department can receive mitigation credits under Section 404 of the Clean Water Act.

"The Stream Team is how we were provided an opportunity to partner on the project," said Ewing.

Saunders said the restoration project will make Crooked Creek in downtown Harrison a pleasant place to swim, fish, inner-tube or kayak. He said existing trails around Lake Harrison will be preserved when and if the weir is removed and the creek restored.

"We're taking a very urban stream and combing everything together and making it work for everybody," he said. "It could be a really good example for other cities."

Saunders said the best plan would be to restore Crooked Creek to its pre-1961 state, flowing through a narrow channel like it did 60 years ago, but retaining a larger flood plain to accommodate flood events.

He said it's possible that the 65B bridge work and Crooked Creek restoration could be done at the same time. Work could begin as early as next fall. Saunders said it would take a few months to remove the dam and do the creek restoration.

Phillips said the city will need to spend another $300,000 to $400,000 to build a pedestrian bridge crossing over the creek. Beyond that, another $1.3 million in park improvements are planned for later, when funding is available.